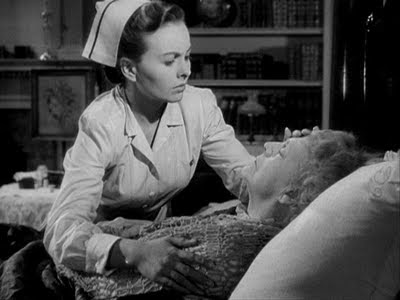 Everyone knows that Hollywood loves a good cause, and Pinky is the sort of film that embodies a cause that makes Hollywood get all wiggly. It also contains some of the most egregious whitewashing in movie history, a case of putting a white actor in a non-white role that actually defies belief. And it was even an Oscar nominated performance, which actually makes a disturbing sort of sense. If all of this sounds like I didn’t like Pinky, well, that’s unfortunate. I did like it well enough; I just see it has some real issues.

Patricia “Pinky” Johnson (snowy-white Jeanne Crain) returns home after spending time in Boston training as a nurse. She returns as a fully trained nurse who, thanks to her lily-white complexion, has passed as white in the north. Her grandmother, Aunt Dicey (Ethel Waters), is a washerwoman with no doubts as to her racial heritage. Immediately upon returning home, Pinky remembers one of the main reasons she left. Those who remember her treat her as a black woman as only a black woman was treated in the South in the 1940s. Those who don’t treat her well until they find out the truth. What Pinky doesn’t tell anyone is that Dr. Tom Adams (William Lundigan) has asked her to marry him, which is what prompted to return home.

The major issue at home, aside from all of the racism, is that Miss Em (Ethel Barrymore) is dying. Miss Em has all of the surface prejudices of everyone else in town, but Aunt Dicey is completely devoted to her. Pinky decides she should leave and go back north where she can effectively pretend to be white, but Dicey demands instead that she stay on and act as Em’s nurse as a form of repayment. Pinky, convinced that Em hates her and looks down on her, does so grudgingly, and eventually warms a bit to the old woman when it becomes apparent that she’s not specifically prejudiced but merely crotchety.

Eventually, Em dies, and this is where the real fun begins. In her will, she gives a few knick-knacks to her only surviving relatives—her mostly-costume jewelry goes to her cousin’s wife Melba (Evelyn Varden)—and leaves her old house and 20 acres to Pinky. And thus everyone in town is set against the girl, convinced that she tricked the old woman into writing the will, because, well, she couldn’t possibly have come by it honestly. When Tom shows up carrying clips from newspapers in the north that have effectively outed Pinky, things become more and more complicated. She can’t stay where she is, and she can’t return to the life she had, and she can’t even get a lawyer to take her case.

This results in a film that is pretty uneven in a lot of respects. It certainly dives head-first into controversy, with racism as the overarching theme. Certainly property rights and legal issues are important here, as is simply the treatment of African Americans in the South of the time. A couple of scenes play this out very well. Pinky’s initial run-in with the police, for instance, follows an interesting trajectory. Initially, in a fight with a woman named Rozelia (Nina Mae McKinney), the police assume that she is being harassed. When they discover Pinky’s racial heritage, rather than figure things out, they haul everyone to the station. Later, Pinky is attacked by a pair of men who know they have free reign to do what they want, because they’ll never be convicted of anything. These scenes are effective, although I can’t imagine what the response to them was south of the Mason-Dixon line.

The major controversial theme here, though, is miscegenation. What’s of primary interest is how everyone in the film apart from Pinky and Tom are against it. In fact, one of the biggest detractors of the relationship between Tom and Pinky is Aunt Dicey, who simply does not approve of Pinky pretending to be something she isn’t. Tom himself doesn’t react with the purest of motives, either. When Pinky’s story breaks in northern papers, he immediately accepts an offer to practice medicine in Colorado, hoping to take Pinky with him and start a new life there away from anyone who knows her origins. But still, the film takes this on, and while both Jeanne Crain and William Lundigan were even whiter than I am (and that’s saying something), the moment he knows she’s black and kisses her anyway, the film becomes something that people in less race-friendly parts of the country sought to ban. (In fact, one theater that showed the film despite such a ban was fined and took the case all the way to the Supreme Court.)

This is Hollywood 1949, so we know going in there’s probably going to be an uplift at the end, and naturally there is one. No real resolution of the race problems is offered. Instead, the conclusion of the film more or less results in all of the problems being swept under the rug.

If I had to pick out the biggest stumbling block of this film, it’s that the role of Pinky is one of the most ridiculous whitewashings I’ve ever seen. Jeanne Crain had red hair. You can’t tell in a black-and-white film, but you can certainly tell that this is not a woman of African descent. Certainly there had to be a competent actress with light enough skin to play this role effectively and still read as African-American. At times, the racial issues become almost farcical due to this obvious disconnect.

Pinky very much feels like the sort of “issues” movie that gets some love at Oscar time (three nominations, no wins) and seeks to educate as well as entertain and move emotionally. It’s a pretty effective film, and there’s plenty of outrage to be had in the watching. Unfortunately, some of that outrage comes from the flatly ridiculous casting choice of Jeanne Crain.

Why to watch Pinky: Its message feels ahead of its time.
Why not to watch: Jeanne Crain is whiter than I am.