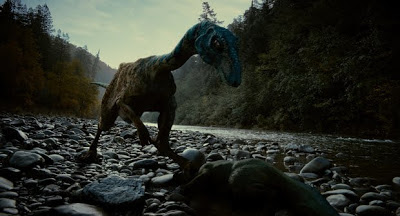 I won’t for a moment pretend that I fully understand everything that Terrence Malick was trying to do with The Tree of Life. The film I am most immediately put in mind of, though, is 2001: A Space Odyssey, although I also found moments where I thought of Koyaanisqatsi on a galactic scale. There is a great deal of power and beauty to the images that Malick gives us. This is a view of life in all aspects, from the very beginnings of the universe and the formation of our world to the individual lives of a handful of people. Much of this film looks like a nature documentary. Most puzzling to me is the fact that The Tree of Life is deeply philosophical, but I cannot determine if it is suggesting that the source of life is a deity or if there is no ultimate purpose to the universe and that life (all life) is its own reward. What’s more, I think it can be interpreted either way accurately. Religious or not, this film is all about the spirituality of existence.

This film is more or less about events in the life of Jack O’Brien (Sean Penn). As the film opens, we learn of the death of his younger brother. We flash forward to the present, and Jack is apologizing to his father (Brad Pitt) about something he said regarding his brother’s death. Jack is adrift in his life, apparently successful, but suddenly unfocused. He begins to think about his childhood (where he is played by Hunter McCracken, the real star of this film) and his relationship with his parents. His father is domineering and dominating while his mother (Jessica Chastain) is more open and loving.

This goes back to what we are told at the start—there are two ways to live. There is the way of nature, which is brutal and grasping, living only for itself. There is also the way of grace, which is more open and giving to the world. Jack’s father represents nature while his mother epitomizes grace.

The Tree of Life is very much like an impressionist painting in that we get only snapshots from Jack’s childhood, snippets of conversation, parts of meals, important events. We see is rebellion against his parents—his father because of his dominating personality and his mother because she allows it. We also get the thoughts of Jack’s father at times, which gives us some insight into the man he is and what he perceives as the tragedy of his own life, and perhaps some idea of why he is the way he is.

I’d be remiss if I didn’t talk about the part of the film that drew the most attention when it was released. There is a long sequence that takes us back all the way to the beginnings of the universe and the formation of Earth. We see a cosmic display of galaxies and nebulae and the fiery beginnings of our planet. We see life begin and evolve, eventually becoming dinosaurs (which are always cool) until we see the extinction event that wipes them out. Eventually, near the end, we see the death of our own sun and its inevitable destruction of the Earth.

This all seems like a very long way to go for what appears to be Jack’s resolution with his father, as does the odd dream vision that Jack has in an elevator near the end of the film. And that, more or less, is the main issue I have with this film. The Tree of Life is remarkably self-indulgent. With these sequences of the birth of time, the birth of our world, the birth of life, and the eventual extinction of the dinosaurs and then life itself removed, this film would be a good half hour shorter. It would certainly be a far less artistic vision, but it would also be far less pretentious in many ways.

Don’t get me wrong here—this film is staggeringly beautiful from start to finish. It is one of the prettiest pieces of cinematography I have seen in a very long time, but this doesn’t change the fact that a great deal of this beauty comes strictly in service of, for lack of a better way to put it, showing off.

I also object to what I consider to be Malick’s false dichotomy of nature versus grace. There are more ways to live than to be open to everything or to be open to nothing. Additionally, I think it strongly mischaracterizes nature as grasping and rapacious. Nature is, for lack of a better way to put it, merely neutral. It exists and abides. Perhaps there is a certain callousness evident in nature, this comes more from necessity and indifference than from being self-serving. I get the philosophy here; I just don’t agree with it, nor with its artificial limitations.

I said above that Hunter McCracken is the true star of this film, and I stand by that. He may not have the drawing power of someone like Brad Pitt to get people interested in the film in the first place, but it is his film to carry, and he handles himself extremely well. This is particularly impressive given how little he is given to work with for long sequences. While he does whisper a voiceover through a great deal of the film, he has very little direct dialogue, and instead must convey his feelings and thoughts through expression and body language. It’s one hell of a good performance from anyone, and more impressive because of his age.

So, ultimately, the comparison with 2001: A Space Odyssey is one that I’ll keep. The two have a great deal in common. Both are singularly beautiful, visually impressive like few other films I have seen. But both feel bloated at times, as if we are getting not what we need for the story but what the director wants to show us to prove himself.

Why to watch The Tree of Life: It’s boy-damn-howdy pretty in a way few films can manage.
Why not to watch: It’s self-indulgent in a way few directors would dare to be.