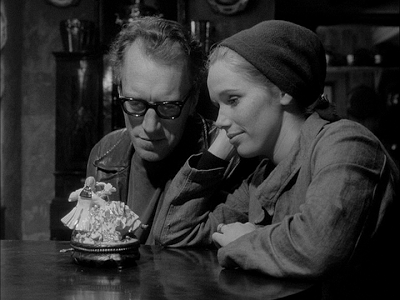 Ingmar Bergman’s Skammen (Shame) is a very odd film in an important respect. The film depicts a couple caught up in the middle of a war, essentially as victims rather than as people on one side or the other, but I have no idea what war it’s supposed to be. From what I can determine, the war here is an allegorical one that exists mostly because Bergman wants to make a particular point about war. It makes this film an odd mixture of something like fact and something very much fiction.

Jan (Max von Sydow) and Eva (Liv Ullmann) Rosenberg live on an island away from most of the madding crowd. Both are former instrumentalists an a symphony, but have since retreated to this island house to get away from an unspecified civil war. While it’s a real enough war in the film itself, I have no idea what war it is representative of, since Sweden doesn’t get involved in wars that often, which is precisely why I suggest that this is a real story that takes place in an allegorical war. Regardless, the war finally comes to the island, first as threats and then as reality.

Jan and Eva attempt to flee the island several times, but are constantly thwarted in getting away. They are rounded up at their house by the invading group and interviewed on camera. Eva is non-committal about things and Jan collapses because of his weak heart. Later, the group in power comes to the island and “rescues” them, but puts the couple through some trials, first accusing Eva of complicity with the enemy by using a dubbed version of her interview. Eventually, they are released back to their home, mostly on the directive of Colonel Jacobi (Gunnar Bjornstrand), who becomes a regular visitor. Eventually, his visits result in a sort of commerce between Eva and him; he gives her a small fortune in exchange for sex.

But it’s not this that leads to the breakdown of the relationship between Eva and Jan, at least not directly. It is Jan’s duplicity in the resulting “trial” of Jacobi for corruption when Jan reveals himself to be capable of self-serving evil. I’ll leave off on the plot summary here, because the ending is both surprising and as symbolic as what anyone should and would expect from Ingmar Bergman. I’ll leave that for others to see themselves.

The biggest question to answer here isn’t what war this represents, although I freely admit that this is a question that continually pressed on me while watching. No, the real question is why Bergman named this the way he did. Whose shame are we talking about here? Is it Jan’s based on his actions after what he deems the betrayal by Eva? Is it Eva’s shame, selling herself both for money and her and Jan’s continued freedom? Is it a more general human shame for the terrors and horrors created by war and the devastation of the lives of normal people? More specifically, is it the shame of lost humanity in times of war? Certainly both Eva and Jan become far colder and more distant as the film goes on, and both become capable of actions they would never have considered at the start of the story.

For my part, I think there’s enough shame here to go around. No one really makes it to the end of the film with his or her humanity intact. Everyone acts eventually on impulse. The destructive impulse of the soldiers who destroy Jan’s and Eva’s home, killing their livestock and burning down the house, Jan’s cold reaction to the money and his hand in the fate of Jacobi, Eva’s rationalization of her own actions—all of these are a symptom of the deadening of any higher human emotions and goals, and all are present here as a natural matter of course. These things happen because they happen. Human values and emotions are degraded when they must give in to impulses of survival or revenge or anger. That this happens so easily, so quickly, so without remorse or even a second thought is the shame of the title.

I think this is the lesson to be taken from Skammen. It is simple for us to lose our humanity, to encounter this sort of shame of our own actions. Jan, complicit in the fate of Jacobi, become cold and detached, surrendering his humanity. Eva struggles and attempts to reclaim hers, but she ultimately attempts to benefit from Jan’s actions as well. An equal question here is this—how much is our humanity worth and how much shame are we willing to accept if it means our survival?

I was most surprised at how quick this film felt. I expected it to feel like a much longer film than it was, Bergman having a reputation for being slow. Instead, I was consistently surprised at its pace, at one point thinking my software might be playing the file too quickly. That’s probably the best compliment I can give it. 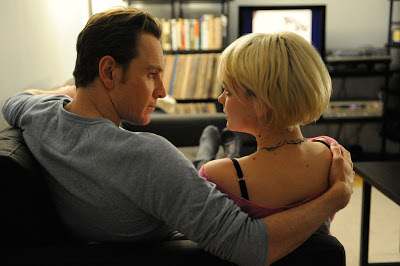 Steve McQueen’s Shame is not a war film, or at least not a film about an active shooting war. The war here is more metaphoric and personal. When Shame was released at the end of last year, I wasn’t sure what to think about its chances. It was released in the U.S. with the kiss of death NC-17 rating, and yet I started hearing a lot about it, and almost everything I heard was positive. I’ve watched it now, and I can see why. Shame, in addition to being its own film, reminds me of several others. There are moments that, oddly enough, make me think of American Psycho. It’s also a much more sexually focused Requiem for a Dream (Requiem for a Wet Dream, if you will) in the way that it looks at addiction and need and people caught up in a world of their own making that has spiraled completely out of control.

Brandon (Michael Fassbender) works at a non-descript but evidently well-paid job. This affords him the life that he wants: a nice apartment and endless opportunities to indulge in his significant sexual addiction. A great amount of this film is fueled by sex, both desiring sex and having sex. That’s not surprising considering Brandon’s addiction, but it’s more than just that. Sex is evident in moments when it wouldn’t normally be, almost as if we are seeing the world through Brandon’s addiction rather than how it actually may be.

Regardless, early in the film, he is visited by Sissy (Carey Mulligan), a self-destructive singer who had a cutting issue in the past and shows a great deal of evidence of neediness. She begs Brandon to come see her perform and he does, bringing along his boss, David (James Badge Dale), who is both married and willing to pursue virtually anything in a skirt. David lays on the flattery thick and in two coats and ends up having sex with Sissy on Brandon’s bed, which naturally causes a bit of tension.

The most telling sequence of the film for me is the one that comes near the end. Brandon has just had it out with Sissy, telling her that she is pathetic for trying to get more attention from the married David, telling her that she is nothing more than a parasite on his life, and then leaving to satisfy himself. He attempts to pick up a woman at a bar and ends up getting a beating from her boyfriend. Desperate, he goes to a gay club and allows another man to perform on him orally. He leaves and fields a message from Sissy who is desperate for attention, but he ignores this and heads to an apartment with a couple of prostitutes.

I’m going to break here for just a second to say this—if you’re watching this film, this is the moment when I can pretty much guarantee that someone will walk in on you and want to know what the hell you’re watching. The sex here is a hair’s-breadth shy of straight-up porn and it goes on for a considerable amount of time. I saved myself from the potential embarrassment of being caught watching Michael Fassbender making his “O-face” by my 14-year-old daughter by being smart enough to watch with only one side of my headphones being on and being quick enough to pause and close the video player before she entered the room. Twice.

Anyway, this scene goes on for a long time, and if it hadn’t been clear throughout the film, it becomes painfully evident here that the sex is not particularly enjoyable for Brandon. He’s doing it because he has to, because he can’t not do it. He’s compelled, and while he can’t stop himself, he’s also completely disgusted with himself. As ugly as it may be to watch (and while prurient, it’s completely non-arousing, or at least was for me), it’s a critical scene because we see just how far down this particular rabbit hole Brandon has gone.

There is no real resolution with Shame and no catharsis, and I think that’s one of the strongest points of the film. There seems to be no way out for Brandon, and at the end of the film, it’s certainly not clear if he is even going to try to deal with what is becoming a more and more crippling part of his life.

This is a harrowing film not simply because of its explicit dealing with sexual addiction. Both Brandon and Sissy are living lives that are come constantly close to spinning completely out of control and neither one seems capable, willing, or desirous of changing anything.

If nothing else, Shame is noteworthy for the two absolutely fearless performances of both Fassbender and Mulligan. Fassbender makes himself extremely vulnerable throughout this film, the sort of role that could easily damage a career if not played perfectly, and he does it perfectly. Mulligan’s greatest moment comes during her dirge-like and absolutely devastating version of “New York New York.” If nothing else, that scene makes the film worth seeing, because there has never been a song sung with more pain, more irony, and more sorrow that I can think of in recent memory.

Why to watch Skammen: Bergman both in the real world and the world of existential crisis, just like he should be.
Why not to watch: What war is this again?

Why to watch Shame: It lives up to its name.
Why not to watch: Because someone is guaranteed to walk in on it at an embarrassing point.