Film: The Treasure of the Sierra Madre
Format: DVD from personal collection on laptop. 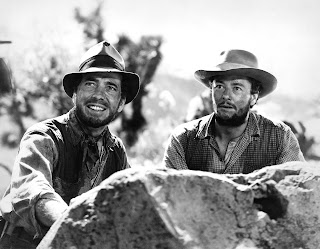 The first 20 minutes of The Treasure of the Sierra Madre is a master’s class on how to set up characters and plot. We meet Dobbs (Humphrey Bogart), a down on his luck American stuck in Tampico begging for money from other Americans. When he finally finds a job with fellow down-and-outer Curtin (Tim Holt) from a man named McCormick (Barton MacLane), they discover that McCormick is a known cheat who always finds a way to avoid paying his workers. They learn about the fever of gold prospecting from an old timer named Howard (Walter Huston). And they confront McCormick and beat him senseless, taking only what they are owed. In this 20 minutes, we learn that our two men are desperate, still honest, tough, and that the idea of finding gold has been firmly planted in their heads.

Our trio heads off into the wilds of Mexico to see if they can locate some of the magical metal that changes hearts and lives. Dobbs and Curtin are initially of the opinion that they’ll be carrying Howard on their back, but Howard proves to be more than able to carry his own weight. In fact, he appears to be in the best shape. After a run-in with fool’s gold and other problems of the Mexican wilderness, they find what they’re looking for—gold dust mixed in with the dirt. They set up camp, build a sluice and a mine, and start digging.

It’s immediately evident that of the three, the most venal is Fred C. Dobbs. While Howard wants enough gold to buy a little store to retire with and Curtin would like to buy a farm and grow fruit trees, Dobbs just wants to live big. He also insists that the gold be divided immediately so that each man is responsible for his own part of the haul. Finally, and this is incredibly important, Dobbs begins to show signs of increasing paranoia. He becomes convinced that Howard and Curtin are plotting against him to steal his money. He views every move that everyone makes with increasing suspicion and anger.

Of course, by the time this happens, we still have half the movie to go, and that means bandits, more paranoia, in-fighting, gun battles and eventually a sort of justice. The bandits are a threat in the second half, and are also the source of the classic line about not needing any steenking badges. From my experience, a lot of people seem to think that comes from The Good, the Bad and the Ugly. I think it’s because the bandits sound a lot like Tuco.

Anyway, for being something like a boy’s-own adventure tale, The Treasure of the Sierra Madre is very much a moral tale. The lesson here is that certain things bring out aspects of a person’s real character. In this case, one of those events is the arrival of a fourth person into the mix. This is James Cody (Bruce Bennett), who has some prospecting dreams of his own, but his presence in the camp causes a great deal of anxiety to Dobbs. Eventually, the men decide that Cody needs to go, but they’re saved the trouble of killing him when Cody is instead gunned down by bandits.

Again, we get a sense of the moral characters of these men when Howard helps save a young child in a nearby village. This ushers in the third act of the film, in which Dobbs goes completely off the rails, allowing his paranoia to get the better of him. Suddenly, the world is out to steal the gold dust in the possession of Fred C. Dobbs and nothing will stop him from protecting it and taking the gold of his two partners, provided he can get away with it.

In many ways, this is Dobbs’s film, because he is the character who goes through the most significant changes over the course of its running time. It’s also very much Dobbs’s movie because this is one of the great performances of Bogart’s career. It’s so easy to think of Bogart in the context of films like Casablanca and The Maltese Falcon. The quality of his acting is made evident in a film like this one. Bogart is such a likeable actor and so easy to root for, that when he plays a villain, it almost feels like betrayal to root against him. But Dobbs is so despicable that there’s almost a joy in what happens to him in the end.

The other person this one belongs to is Walter Huston, who gives one of the most natural performances I’ve seen from anyone. Huston doesn’t look like he’s playing a prospector—he looks, acts, and talks like a prospector who got hired on as an actor. He’s also the moral opposite of Dobbs. Howard knows the score at all times. He doesn’t shy away from making a difficult choice, but tends to put himself in the position of forcing the others to make the difficult choices instead. Howard’s way is the easy way and the decent way unless he’s convinced it should be something different.

If Dobbs is our moral bottom and Howard our not-very-high moral top, Curtin is the one who falls in the middle. He certainly seems like a man who wants to do the right thing, but is also quick to agree with Dobbs that they should bump off Cody rather than make him a partner. It’s the incident with Cody, and the letter from Cody’s wife in his pocket that makes the final push for Curtin as to how he wants to come at the world.

It’s worth commenting however obliquely on the ending. There are, I think, people who will feel cheated by the ending of this film. Those who feel this way aren’t putting the mental diligence into what really happens. It’s a perfect ending, a fitting ending, and one that our characters in many ways deserve.

All of this morality talk is all well and good. It’s a secondary concern of watching this film, though. Of primary importance is the fact that The Treasure of the Sierra Madre is a damn fine piece of filmmaking. There’s a reason that this is considered a classic from the late 1940s and a reason it walked away with three of the four Oscars it was nominated for. It ranks among John Huston’s best work behind the camera and Walter Huston’s best work in front of it (seriously, you’ll swear the man spent 20 years hunting for gold with only a burro for company). It’s also a memorable role for Bogart, and any Bogart should be treasured.

Why to watch The Treasure of the Sierra Madre: There’s no aspect of this film that isn’t top of the line.
Why not to watch: The ending might come off as strange.