If Music Be the Food of Love, Play On

Film: Once
Format: DVD from NetFlix on big ol’ television.

I’ve finally figured out why I really don’t like romantic comedies. I’ve always thought it was because they set up unreal expectations. The romantic gestures that eventually get the girl at the end of the movie are the kind of thing that would get a typical guy arrested and slapped with a restraining order in the real world. There’s also the idea that women in most romantic comedies, no matter how accomplished and successful they may be, are failures simply because they don’t have a man in their life. But I’ve finally figured it out. 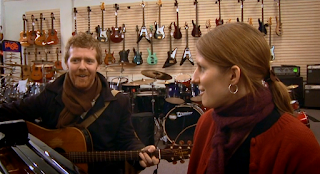 The reason I’ve figured it out is because I watched Once, which is not a romantic comedy, but a romance that features a lot of music and some really good performances from actors I’ve never seen before. And here’s the thing—what makes this film work is that I genuinely like these characters. They sell the story, they sell the film. Ultimately, Once has led me to figuring out that the main reason I don’t like romantic comedies is that I genuinely don’t like the characters. They almost always come off as smarmy, stupid, arrogant, spoiled, and unpleasant. Contrast that with this film, where the characters are sweet, natural, and likeable. I also appreciate it when a romance ends on a down note. Sure, I like some that end happy, but I like the sad ones more (Amelie and a few others are notable exceptions).

A busker in Dublin known to us as Guy (Glen Hansard) fixes vacuum cleaners for his father and plays songs out on the street at night and on his days off. One of his songs attracts the attention of an unnamed Czech woman (Marketa Irglova), who learns about his job fixing vacuums and tells him she’ll bring her broken one to him. In due course, we learn a little bit more about the pair of them. We discover that he has had his heart broken by a girl who has since moved to London, and he’s torn about pursuing her. The girl (the one in Dublin) is also a musician, has a young daughter, and she lives with her mother.

There’s an obvious attraction between the two of them, but neither one is willing to act on it because of their past and present commitments. He decides to go to London after all, but wants to record a demo of his work before leaving, and gets her to agree to help him. They secure a bank loan to cover studio time, gather up a few musicians, and put together a few solid tracks. He asks her to come with him despite discovering that she is married, and she declines. And this is all I’m going to say. I’ll leave the last minutes of the film out of this, since it should be discovered on its own.

The film I’m most put in mind of is Before Sunrise. In the review contest I participated in last year, the review of that film was the one that got me booted from the tournament—I got my ass kicked on this one, and because Before Sunrise is not a horror movie, and Oscar nominee, or on The List, I’ve never published the review here. But I still have the original writing, and I’m going to steal from it now, because it applies to Once just as much:

“Ultimately, the uninitiated viewer is warned that there is a significant difference between a romantic comedy and a romance. The first tends more toward the quick feel-good, ridiculous situations, unreal characters, and unrealistic expectations. The second deals with real people struggling with real decisions in a real world of emotions, pressures, and expectations. It’s also why there are more good romances (like this one) than good romantic comedies.”

Our two principle actors here are wonderfully natural on camera, despite both being better known as musicians. They’re likeable and real. It also helps here that the songs are really, really good and really well performed. This is the way I like songs in my musicals—they come up naturally as a part of the story and make sense in the context of the film rather than being something that pulls me out of the story. Here, they flow as naturally as conversation and become an environment for the film to exist in. Seriously, some of these songs are fantastic.

I have to say I didn’t know what to expect with this film, but I certainly didn’t expect this sort of sweetness or to find it so affecting. This is a film that I find it difficult to see how someone might dislike. I can see people not liking it as much as I did or being as taken with these two marvelous characters as I was, but disliking this film? I don’t know how someone could.

If you haven’t seen Once, make room for it. It’s short, and it’s worth your time. If you fell for Before Sunrise or got teary at the end of Brief Encounter, I can’t imagine you wouldn’t be enamored of this film.

Why to watch Once: A beautiful story beautifully told.

Why not to watch: Heartbreak.