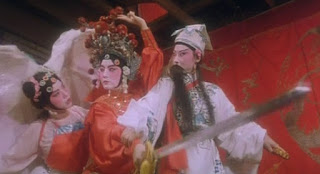 Okay, I’ve seen some weird shit in my lifetime, but few things as completely nonsensical as Do Ma Daan (Peking Opera Blues). I mean, I’ve seen Eraserhead and Liquid Sky, and both of those films made way more sense than this one did. I’m not even sure where to begin. I typically spend some time rehashing the plot to help make sense of the film and to highlight particular aspects of it, but with this film, I have nowhere to begin. Here’s a quick synopsis: stuff happens.

Because of this, what you are reading may well be the shortest review I’ve ever written, because without a plot that makes any sense, I have only the performances (such as I can make sense of them), the action sequences, and what evidently passes for comedy in mid-‘80s China. There are some pretty funny moments, I’ll admit. But there’s also an incredible amount of unintended humor created by the single worst subtitle track I have ever seen in my life.

I’m not kidding. The dialogue for Do Ma Daan was apparently translated from Mandarin (I think) to English via a third language spoken by neither of the original translators. There is almost no way to explain just how ludicrous some of the speeches are in much of any other way. We get speeches like, “It’s so danger here, you’ll get caught?” or “You’ll be fail,” and “If he finds out all you do these.” I’m almost (almost, mind you) worried that all my base may belong to them.

Eh, no matter. As near as I can figure, it’s China between the World Wars and the country is in turmoil. Warlords fight for power while Sun Yat-sen attempts to set about the creation of a democratic republic. There are a number of people working for this against a general who is attempting to conquer the south of the country. These include his daughter, Tsao Wan (Brigitte Lin), who dresses like a man in an effort to move more freely in society. There is also Sheung Hung (Cherie Chung), a performer trying to find a box of jewels. Third is Bai Niu (Sally Yeh), the daughter of a theater operator. She’d like to be on stage, but he won’t let her. Inexplicably, the subtitles call her Pat Neil. “Pat Neil” sounds like the name of someone in charge of her third grader’s PTA. There are also two guys—a revolutionary and a deserting soldier—played in some order by Paul Chun and Mark Cheng, but I couldn’t tell you which is which. I think Mark Cheng is revolutionary Ling Pak-hoi and Paul Chun is glasses-wearing deserter Fa Gum-sao, but I wouldn’t bet on it.

Step 1: Have people jump all over the place and fire guns and stuff.
Step 2: ?
Step 3: Profit!

Seriously, though, there are things here that don’t make any sense. When our two not-the-general’s-daughter heroines prepare to meet with the general, they are given a sleeping powder to give him, but one of them drops it. This would be an interesting plot point except for the fact that she realizes that she’s lost it before she meets the general and is given another packet. That plot point is set up and hammered in (we get specific shots of the dropped packet) and then it’s glossed over as if it was no big deal and proves to be something that doesn’t figure into the encounter with General Tsao. I just don’t get it. So much doesn’t make sense here. Tsao Wan shoots a guy, then worries that he’ll expose her identity despite the fact that he’s dead.

I can’t make heads or tails of this thing, but allegedly, I’m not allowed to die until I see it. Well, I’ve seen it now and I don’t feel enriched or enlightened. I just feel confused. To quote General Tsao, “If I am afraid of dangerous, I’ll not be an army.” I can’t say it any better myself.

Why to watch Do Ma Daan: Great stunts.
Why not to watch: It makes as much sense as a raspberry-flavored suppository.