I’ve known for a couple of years that when I got to either of today’s films I’d watch them on the same day; they’re a natural double feature based on the titles if nothing else. I’ve put them off until now mostly because I was nervous about one of them and didn’t have a great deal of interest in the other. Still, I’m running out of films, and with February being a down month for me in general, it was time to knock them out. While both films (obviously) deal with serial killers, they couldn’t be more different. 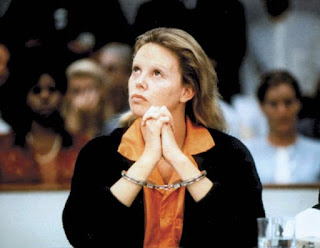 Aileen Wuornos: The Selling of a Serial Killer is a documentary about the title character, the first convicted female serial killer in American jurisprudence history. It is one of the oddest documentaries I’ve ever seen in that it would seem to be tailor-made to be a lurid story, but it’s not. Rather than focusing on the seven murders Wuornos was accused of (she was ultimately convicted of six), it instead focuses on the people around her, many of whom decided to associate with her specifically to make money from her crimes.

As the first convicted American serial killer, a prostitute, and a lesbian, Aileen Wuornos hit the trifecta of details that would make any filmmaker looking to cash in on prurient interests wet his pants. Instead, Nick Broomfield decides to go a completely different route. A great deal of the film concerns, as mentioned, people who surrounded Wuornos after her arrest. Of these, Arlene Pralle, Wuornos’s adoptive mother (she adopted her when Wuornos was in her 30s) takes center stage. We learn that arrangements are made seemingly contrary to the Son of Sam law that prevents criminals from capitalizing financially on their crimes. Pralle demands money up front for interviews and is actively shopping the story of her adopted daughter to any filmmaker within earshot.

Also prominent is Wuornos’s lawyer, Steve Glazer, who evidently has the same mercenary streak. A fairly strong case is made that the legal arrangements made on behalf of Aileen Wuornos were instead made on behalf of Pralle and with an eye toward lucrative book and film deals after her trials, convictions, and eventual execution.

The other accusation put forward here is that Wuornos never really received anything like justice because of her guilty pleas and because evidence (particularly in the trial of her first murder) was never brought to light; her first victim was an accused rapist. This is critical, because Wuornos contended from the start that all of her crimes were committed in self-defense, that each time she killed, it was to prevent herself from being raped.

Broomfield’s film is an attempt to portray Aileen Wuornos not as a cold-blooded killer or a man hater, but as a victim, both of the life she led as a prostitute and at the hands of a judicial system that wanted blood and headlines. Frequently, and often from Wuornos herself, the idea is put forward that her trials and death sentences are little more than an effort from the powers-that-be in Florida to create political capital for re-election on her corpse. The ultimate strength of this film is its sheer audacity in bringing these claims to light. It’s greatest weakness is, ultimately, the weakness of the case it presents. Most juries, and in fact most people, would have believed a case of self-defense from any woman, prostitute or not, at the hands of a convicted rapist. What they could not believe or be brought to consider was that such a scenario played itself out seven times with the same woman. Wuornos herself is the biggest detraction from the story she wishes to present. Too often she simply looks like a killer—quick to anger, immediately hostile, foul-mouthed, raging, and threatening other people in the courtroom. It’s easy (and perhaps too easy) to see her as someone willing to kill.

Because of this, Aileen Wuornos: The Selling of a Serial Killer offers an interesting premise, but is uneven in delivering on it. It’s simply too much to ask people to accept that anyone is this much a victim of bad timing and circumstance. The question of capital punishment is a different one, and not really addressed in this film. The question of guilt, though, seems determined, despite any protests anyone seems to make. 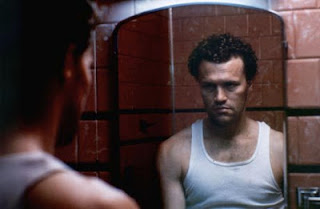 Henry: Portrait of a Serial Killer is the complete opposite end of the spectrum, lurid in the extreme and unapologetic in its violence. In fact, this film is in part responsible for the creation of the NC-17 rating, a film of adult themes that is not explicitly sexual in nature. No, this is a film that gives us multiple homicides, many of which are brutal and horrifying. At the same time, this is not a film that specifically glorifies such killings—they simply happen and we are witness to them. They are ugly, but also matter-of-fact, simply events that occur on the screen.

We start with an introduction to Henry (Michael Rooker), who seems normal. However, we also get cuts to the bodies of women with the sounds of their struggles and death playing over them. While the connection is never made overt, we’re led to believe that all of these women, killed in different ways and in different places, are victims that Henry has left in his wake.

We also meet Otis (Tom Towles), Henry’s roommate. Otis’s sister Becky (Tracy Arnold) has left home and her husband to move to Chicago with Otis. There’s something like a spark of connection between Otis and Becky, in part because Henry defends her from her brother’s sometimes overtly incestuous advances. One night while Otis is out, Henry and Becky talk about their pasts. We learn that Henry was psychologically abused by his mother, which eventually led to him killing her. Becky was sexually abused by her father (and possibly her brother) when she was younger. These admissions lead to a strengthening of the connection between them.

And then things get ugly. Henry and Otis pick up a pair of prostitutes, and unable to help himself, Henry kills them both in front of a shocked Otis. However, Otis’s shock is not disgust, but merely shock. There’s no remorse, just fear that they might be caught. Later, after Otis destroys the television set, the two go to buy a new one and end up killing the clerk and stealing both a television and a video camera. This sets Otis in motion as a wannabee killer, and he studies at the feet of the master, Henry. Henry, for his part, drops continuous pearls of wisdom about the art of serial killing. He recommends using different methods as often as possible so as not to look like a serial killer, and never staying the same place for too long.

As with Aileen Wuornos: The Selling of a Serial Killer, the strength of this film is its audacity. This is a film that decides from the very start that it will pull not a single punch. It will neither glorify the violence it depicts nor make it any more terrible than it is on its face. The horror comes from the nature of the crimes, certainly, but also from the fact that these crimes are depicted without overproducing them or hiding them. They happen in front of us, not off screen where they are merely imagined, but they are also not focused on with perfect lighting and special effects. They simply are, and because of this, are brutal.

I was right to be scared of this film. It’s terrifying because of what it represents. There’s no psychology here beyond what we can glean from conversation and the actions on screen. In fact, we aren’t really invited into Henry’s mind. Instead, we’re just a witness to his relentless need to kill.

There are, of course, several scenes that fans of the horror genre will consider to be classics, and of course these are the scenes that are really the most difficult to watch. The home invasion scene, shot through a stationary camcorder is particularly ugly and disturbing. Of course, the whole film is ugly, but ugly with intent. Seriously, this film like few others had me praying to reach the end, but in this case, I mean that as a compliment.

I’m not sure this is a film I could watch again, but I also fully understand why it’s considered an important film in the genre. It’s awful, but it’s also brilliant in its awfulness. This doesn’t even take into account one of the grimmest endings I’ve ever witnessed.

Why to watch Aileen Wuornos: The Selling of a Serial Killer: If you need to know what greed does, here’s your lesson.
Why not to watch: Its sympathetic portrayal doesn’t work.

Why to watch Henry: Portrait of a Serial Killer: It’s terrifying.
Why not to watch: It’s also the seediest thing you’re likely to see.