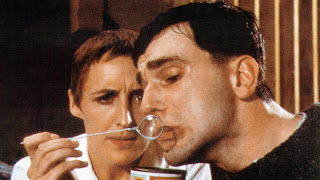 If there is a more dedicated actor in the business than Daniel Day-Lewis, please point him or her out to me. It has been reported that during the filming of My Left Foot, Day-Lewis refused to leave his wheelchair, required other people to feed him, and stayed in character while on set the entire time. From what I understand, this is par for the course with him. What that means to me is that I’m very happy I didn’t work on Gangs of New York or There Will Be Blood. He’s been nominated for an Oscar five times, and has won two so far. I imagine that anyone reading this in a couple of weeks will be wondering why I forgot his almost inevitable Oscar for Lincoln. Well, that’s because I’m writing this about 10 days ahead of the ceremony. I’m just guessing that he’ll win.

My Left Foot is the inspirational and somewhat true story of Christy Brown. Brown was born with severe cerebral palsy and had full control over only one part of his body: his eponymous left foot. Assumed to be mentally retarded as well as physically handicapped, it took years for Brown to get others to understand he was not merely mentally average, but bright. The film chronicles his story of learning to write (he eventually became an acclaimed novelist) and draw (as well as a noted artist), doing everything with his left foot.

The plot is one that I can call inspirational without getting maudlin and without resorting to the kind of jaded exasperation that I typically offer for such things. It is, however, not anything unexpected. In fact, it is downright predictable in places. We start with the young Christy Brown (played beautifully by Hugh O’Conor in a fairly forgotten role) as he struggles to make others understand that he has an active and functioning mind behind his physical liabilities. We learn about his mother (Brenda Fricker, most recognizable to many as the mom in So I Married an Axe Murderer) and her steadfast devotion to her son. We learn about his father (Ray McAnally), who is a hard, violent man, but as loving and proud of his children as he can be. We meet the whole of the Brown clan, and discover a family fiercely loyal to each other, dedicated and loving.

We see crushing poverty when Christy’s father loses his job. We see the now-adult Christy Brown (played through the rest of the film by Daniel Day-Lewis) start to paint. And then the arrival of Dr. Cole (Fiona Shaw, best known today as Harry Potter’s Aunt Petunia), with whom Christy falls into unrequited love. We see the blossoming of his career and the personal descent into loneliness and personal despair. Despite this, the film is generally uplifting and positive.

Naturally, if you do a little investigating into things, you find that the reality is quite a bit less than the filmed version. Brown did eventually get married, but upon his death, doctors found evidence of physical abuse, and his wife’s frequent infidelities were a poorly-kept secret. Typically, I’m not a fan of whitewashing biographies in film, but in this case, I’m willing to give it a pass. Brown’s life was struggle enough and story enough.

The sell here, of course, is the magnificent performance of Daniel Day-Lewis, who lives the role. While he’d had some good roles before, it was this film that really put him on the map, and with good reason. It also marked the moment when he became much more selective about his roles, sometimes waiting for years between films for the right project to come up. His role as Christy Brown is a testament to his dedication to the craft. It would have been easy, and perhaps tempting to play Brown as pathetic. It would be equally easy and tempting to play him as wholly heroic. Instead, Day-Lewis plays him as real, and this is by far the correct decision. Rather than constantly sad or maudlin or ridiculously cheerful, Brown comes off as a bit of a bastard, but one that’s a guilty pleasure for the audience. Think Dr. House with greater mobility issues.

Director Jim Sheridan gives it the right touch, too. There’s a real tenderness between Christy and his mother that truly comes across in the film. Additionally, Christy’s massive family is a pleasure. I couldn’t name a single one of his brothers or sisters, but they come off as the kind of family that is happily bound together through anything, and both protective and proud of the talented and broken member of their clan.

If anything, I disliked some of the musical choices. It’s a little too happy and cheery in places, a bit too clichéd. That’s a minor quibble, though, for a film that shows an actor truly on the top of his game and a director smart enough to know that this actor would very much sell the film in every aspect. Great stuff!

Why to watch My Left Foot: Daniel Day-Lewis, hands down.
Why not to watch: As is typical, it doesn’t really match the reality.