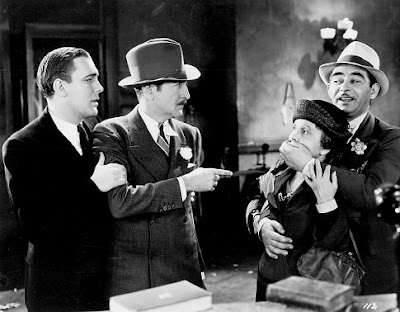 When I started watching The Front Page, it certainly seemed familiar to me. And then people started talking about Hildy Johnson, and I knew I knew that name. Hildy Johnson is the character played by Rosalind Russell in His Girl Friday. I suddenly got the impression that this might be an earlier film, sort of a “Hildy Johnson before we got to the famous film” sort of thing. So imagine my surprise when it turns out that The Front Page is essentially the same film as the later (and better) His Girl Friday, and in this version, Hildy Johnson in a man. Yeah, I know. Weird, right?

But that’s what we’re left with—a precursor version of a classic screwball comedy. Newspaper man Hildy Johnson (Pat O’Brien) is planning on quitting the paper and moving to New York for a job in advertising. The impetus for this is not just the cushy salary of the new job, but also his impending marriage to Peggy Grant (Mary Brian), who wants him to have a normal life instead of running around after stories at all hours. This move does not sit well with Hildy’s boss, Walter Burns (Adolphe Menjou), who realizes that Hildy is a born newspaper man and wants to keep him on staff.

All of this is happening as the state is preparing to execute a man named Earl Williams (George E. Stone), thrown in prison for murder and for being a communist rabble rouser. Williams protests his innocence, claiming that he isn’t a rabble rouser and that the murder was an accident, but all to no avail. The only other person protesting his innocence is Molly (Mae Clarke), who has been romantically linked to Williams unfairly.

And really, that’s pretty much it. The other newspaper men from other papers are silly and lazy, with only Hildy and Bensinger (Edward Everett Horton) showing anything like a work ethic. In the meanwhile, a psychiatrist attempts to recreate Williams’s crime, and Williams shoots the psychiatrist and makes a break for it, eventually finding his way into the pressroom, where he is captured by Hildy and stashed into Bensinger’s roll-top desk for safe keeping. Meanwhile, a pardon has arrived from the governor, but the mayor and the sheriff are facing reelection and want the execution to go off without a hitch, making for a potential scandal if Hildy can get wind of it. And, naturally, Peggy is pressuring Hildy to leave while he takes the opportunity to write one last story for the eponymous front page.

And that’s the whole thing. It’s face-paced and there’s always something going on. Everyone is just a little bit insane all the time, which is what really makes for a good screwball comedy. There’s constant high-speed dialogue, and it doesn’t slow down until the credits roll at the end.

Here’s the problem: it’s not His Girl Friday, which is better in every respect. The story is effectively the same with only cosmetic differences like the interplay between Hildy and Walter Burns (since it’s obviously no longer both business and romance). But it’s simply not the same film, and in every instance, the later film comes out on top. Pat O’Brien is fine, but he’s not anything close to Rosalind Russell. Russell is a better actor, more fun to watch, and has better comic timing. Adolphe Menjou is good (and Oscar-nominated) in the role, but he’s no Cary Grant and never will be. It’s almost a shame in the sense that this film was ruined for me because I’m already far more familiar with its better incarnation.

Additionally, The Front Page as it exists on NetFlix is in dire need of being restored. The print is pretty muddy and the sound desperately needs to be fixed.

Ultimately, unless you are a completist or neurotic about crossing off items from a list (--raises hand slowly--), there’s no need to see this film when you can watch His Girl Friday instead.

Why to watch The Front Page: One hundred minutes of craziness.
Why not to watch: The only version of this story you really need is His Girl Friday.