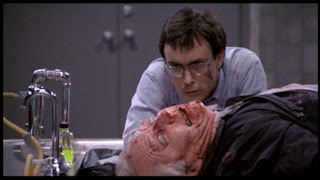 I’m trying to remember the first time I saw Re-Animator. I’m sure I was too young to watch it, and I’m almost positive that I watched it with my brother Tom. I’m pretty sure that Tom rented this from the old video store strictly based on the box art, which featured one of the greatest taglines in B-movie history: “Herbert West has a good head on his shoulders…and another one on his desk!” Needless to say, both of us loved it. We loved the campy fun of it, the gore, the great one-liners, and everything else. Of course, this was in the pre-internet days, and neither of us knew that we were diving head-first into what has become one of the great cult horror films of the 1980s. I recently re-watched The Breakfast Club, which I consider one of my favorite and one of the best films from 1985. I’d be lying if I said something different about Re-Animator.

The story is based roughly on a short story by the great H.P. Lovecraft. It’s one of his stories that doesn’t deal with the Great Elder Gods and C’Thulhu and all the rest. No, in this case it’s bringing back dead people, re-animated corpses, and life after death. Herbert West (Jeffrey Combs) is a medical student investigating the line between life and death. He arrives at Miskatonic University, where he soon makes a name for himself. First, he shows open contempt to Professor Carl Hill (David Gale) and his beliefs on brain stem death. Second, West moves in with star pupil Dan Cain (Bruce Abbott), who is currently dating Megan Halsey (B-movie queen Barbara Crampton), daughter of Dean Halsey (Robert Sampson).

West is secretive and weird, but we soon find out why. Dan’s pet cat is discovered dead inside West’s refrigerator, along with a vial of fluorescent green liquid. Later that night, Rufus the cat comes back, thanks to that green liquid. See, West isn’t merely interested in the line between life and death—his goal is to conquer death, and the glowing green liquid is the key. Sadly, the formula doesn’t work the way West wants it to. Those things that come back are uncontrolled and violent, as we discover when Dan is forced to save his weird roommate from the reanimated feline.

From there, it’s a rapid descent into re-animated corpses, blood, death, and all the fun anyone expects from a B-movie. And really, this is not a film that waits to bring the joy. Twenty minutes in, and we’re re-animating cats. Before the halfway point, Dan and Herbert have been kicked out of school for tampering in things best left alone, they’ve broken into the morgue and have brought a body back to life, and said corpse has gone on a rampage, killing Dean Halsey who naturally becomes their next reanimation subject. So by the time we reach the midway point of the film, it’s already going crazy, and it just gets more and more insane from there.

I don’t want to spoil things here, so I won’t go into a lot of details. Suffice it to say that the arrogant and possibly plagiarizing Carl Hill also has a thing for Megan Halsey, and would love to steal the credit for West’s reanimating solution. When West retaliates by decapitating Hill with a shovel and then brings back both the head and the body to life, the joy really starts.

No one, not a single person in the world, will mistake Re-Animator as a film that should’ve won a couple of Oscars. That said, anyone with any sort of love for horror or gore could do a hell of a lot worse. This film, for all its camp roots and potential to be yet another gory film, plays things as straight as possible, which is what makes it work. That, and the performance by Jeffrey Combs really seal the deal.

I want to talk for a minute about Jeffrey Combs in general, and him in Re-Animator specifically. Combs is a great character actor, often getting roles like this one, in B-horror films and weird oddities. It’s kind of a shame. While Re-Animator is what it is, Combs sells this part as much as he possibly can. There’s an Anthony Perkins in Psycho quality to what he does here, and the physical resemblance doesn’t hurt. Combs’s Herbert West is insanely driven to accomplish his goals, intense beyond all reason, and driven by a maniac intensity. Combs manages to pull this off in a way that never feels overacted or out of place. Even when he’s delivering lines that are ultimately funny, he pulls it off with deadpan grace. In a different world, he’d have the same sort of cult fan base as a guy like Bruce Campbell, and he really deserves that much love and attention (no disrespect to Ash or Sam Axe intended). Mr. Combs, if for some reason you ever read this, please return to Twitter and participate more.

So really, that’s it. Re-Animator is gory, and nasty, and wildly entertaining. If you’re a B-movie fan, you’ve almost certainly already seen it. If not, you should track this one down as soon as possible. If you aren’t the type who cheers when the zombies come marching in or the monster makes an appearance by ripping someone’s spine out, you’re not going to find much to love with this film.

For me, though, Re-Animator will always recall discovering that uncut industrial diamond in the rough of drive-in fare at the Video Bug. This is another film where my love of what it is greatly outweighs the sum of its bloody, bloody parts. As an added note of just weird fun, David Gale, who plays Carl Hill, looks disturbingly like John Kerry.

Why to watch Re-Animator: It’s the most fun you’ll have with a B-movie

Why not to watch: If you don’t like horror, you won’t like it, but really, that’s it.

Posted by SJHoneywell at 8:14 PM