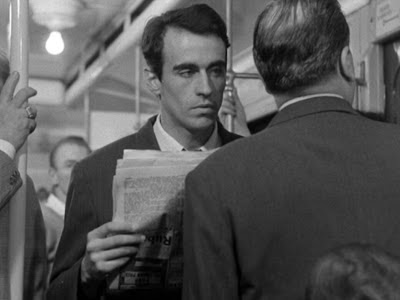 Seeing someone pick a pocket is like watching a magic trick. It’s a subtle art, one that by its nature combines both speed and a light touch. It’s no surprise that Robert Bresson’s Pickpocket explores this particular activity at some length. The title would suggest that, of course, but since this is Bresson, we’re going to spend a good deal of time watching scenes where everything that is happening is happening below the surface. What this means is that we’re not going to get a high-speed montage of pockets being picked, ut a slow and painstaking linger on individual crimes. So when we do get a montage, it’s actually something of a shock.

Because this is Bresson, it’s a slow mover, much more interested in the slow build of character rather than the rush of excitement. Almost all of our time is spent in the company of Michel (Martin LaSalle), a pickpocket who gets picked up at the racetrack with a wad of cash. He’s released by the police because they can’t prove anything, but a particular inspector (Jean Pelegri) has his suspicions.

Meanwhile, Michel’s mother (Dolly Scal) falls ill. It is here that Michel meets Jeanne (Marika Green), a young woman who lives nearby. Michel’s friend Jacques (Pierre Leymarie) takes an interest in Jeanne, as does Michel. Professionally, Michel moves up in the world by gaining a couple of partners who perform an elaborate set of moves to quickly and cleanly pick the pockets of their victims. One distracts the mark, the second steals the wallet or other item, and passes it off to the third, who otherwise has no connection to the first two. We get some elaborate shots of these crimes—a distraction, a deft move of the hand, a drop of the wallet down the inside of the victim’s coat so it falls out the bottom, and then a slip into the pocket of the third member of the trio. Surprisingly, although we see this several times, it never gets old.

Eventually, Michel is pressured by the inspector, who knows he is guilty of picking pockets but doesn’t have quite enough to convict him of anything. Michel gets the hint and leaves the country. He tries to make a living, but pisses away his money and is eventually forced to return to France, where he discovers Jeanne has had a child by Jacques, but is no longer with him. Michel feels obligated to help her, but is unable to make enough money at a job to support her, and thus is forced back into a life of crime, a life that he’s not sure he wants, but that he is good at.

Because this is Bresson, it moves at a snail’s pace, but also because it is Bresson, this pace is fascinating in the extreme. Much of what we learn through the film comes from Michel’s internal monologue or his writing in a journal. He speaks far more in voiceover than he does in actual dialogue—in fact, there is probably more monologue from him through the film than dialogue from the entire cast taken as a whole. Bresson loves to offer us luxurious and painstaking shots of the details of what is happening. It is almost as if he is suggesting that only by knowing the details—watching Michel practice quickly and cleanly unclasping a wristwatch fastened to his bed—that we will truly understand the dedication he has to his illegal craft.

In spite of itself, this stuff is great to watch. It’s not too much of a stretch to suggest that Bresson is simply showing us the same magic trick over and over with slight variation, but each time we see it happens, it feels new and exciting. It’s also evident that Bresson finds this absolutely critical to the film he is presenting—its short run time means that there is very little fat here, and that everything we see is important in some way.

One interesting theme running through the film is Michel’s own half-baked version of the Nietzschean Superman. It is Michel’s contention that there are certain people in the world for whom the law holds no real weight; they are men of such power and force that they should be permitted to break laws as they see fit, and that only they should have the strength of character to determine if they can break the law with impunity. He holds as his ideal in this respect a well-known pickpocket of a former age, whose biography he often carries with him. In truth, Michel is in many ways talking about his own idealized version of himself, attempting to rationalize his skill as a pickpocket and his lack of contribution ot society with ideas that allow him to act in whatever way he sees fit.

I’m continually impressed by the world of Robert Bresson, who is very much a poet on celluloid. I find his work difficult to describe because they are so easy to get lost in and so easy to understand by feel. Pickpocket is one of the best of his I have seen and an interesting study in the life of a too-introspective criminal. There is an overhanging sadness to this film, a sense of impending doom at all times. That can only be intentional, and only serves to make this film play like a tragedy on the grand scale, which works surprisingly well for such an ordinary character as Michel.

Why to watch Pickpocket: Bresson’s work is beautiful and tragic.
Why not to watch: If you aren’t prepared for slow, you’ll never make it through.