The Most Important Meal of the Day 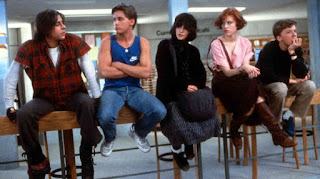 There are films that define particular generations at particular moments in their history. For my generation, the 1980s were defined by the films of John Hughes, and of these, none more perfectly encapsulated that generation than The Breakfast Club. This is not a film that I have any ability to discuss with anything like dispassion or objectivity. I’d guess that anyone within five years of my age will comment similarly: this more than any other film defined who we were, how we thought, and how we wanted to be at our disaffected, semi-rebellious best. I’d go so far as to suggest that almost everyone of my generation has a character in the film that he or she identifies with immediately, and if they watch it again today, they’ll likely identify themselves in the same way. The Breakfast Club told us who we were (mine isn’t that hard to guess).

Five kids are sentenced to a Saturday detention in their high school. The five represent completely different cliques in the school. There is the princess, Claire (Molly Ringwald); the jock, Andrew (Emilio Estevez); the burnout John (Judd Nelson); the brain, Brian (Anthony Michael Hall); and the basket case, Allison (Ally Sheedy). Their day starts at 7:00 in the library under the direction of vice principal Dick Vernon (Paul Gleason), and they will be released at 4:00. They aren’t supposed to talk to each other or leave their seats, and Vernon has given them the additional task of writing a 1,000 word essay on who they think they are. From that premise, the five kids actually spend the day discovering who they are, what makes them who they are, and the many, many ways they are actually alike. That’s really it—it’s a character study times five, with the added bonus of a bit of character study on Dick Vernon, too.

That sounds perhaps vaguely interesting, or perhaps maudlin and bit silly, but it’s not. Like I said, I can’t really look at this film objectively. I admit that it has its faults; the Ally Sheedy character, for instance, isn’t given nearly as much value until the moment she gets a makeover, when she instantly becomes desirable. I see that, I recognize that it plays into the same Disney/Barbie myth that is prevalent in our society, but this is also one of the few places that that doesn’t bother me as much as it normally would.

There are a dozen fantastic moments in the film—Judd Nelson crawling across the ceiling tiles, Anthony Michael Hall fishmouthing at marijuana smoke, Emilio Estevez dancing through the library, the Pixie Stix and Cap’n Crunch sandwich, and more. The true moment of truth, though, is not the end, but time before, when the five are sitting in a circle, baring their souls to each other in their frustration and rage at their parents, the system, and everything else. It’s in this scene that our brain character, the good kid with good grades who is failing shop class, asks what happens when school resumes on Monday. How do these five very different but very similar people react to each other when the social pressures of life in school return? That’s really the only question worth asking. We never see what happens on that following Monday, so we never really find out. But how we think it goes in many ways defines this film for the individual viewer as much as does our personal choice of avatar from among the five students.

The second critical moment is the actual essay that is penned by Brian as the day wraps up. The students, having experienced something none of them could have expected, a complete catharsis and possibly a new way of looking at world, walk out of the building, leaving Vernon behind to read what Brian has left him. It’s a beautiful encapsulation not only of the five characters, but of their relationship to each other and his relationship to his students. Earlier in the film, he divulges his problems to Carl, the school janitor (John Kapelos). Carl knows the truth, and we discover at the end that the kids have figured out the truth, too, or at least as much of the truth as is relevant to them.

I can say with perfect candor, and I believe perfect accuracy that there isn’t a person who went to high school when I did who didn’t identify completely with this film. It’s one that I think needs to be seen in that sweet spot of years, ages 15-18, to really understand the magic that John Hughes pulled together.

Forgive me for waxing nostalgic. With this film, I just can’t help myself.

Why to watch The Breakfast Club: No other film best encapsulates growing up in the 1980s.
Why not to watch: We never find out why Claire got her detention.