Last year on Super Bowl Sunday, I watched a musical. While I certainly could have done the same this year (I have a few musicals left to watch, although not that many), I decided this year I wouldn’t go the non-manly route. Instead, I went the non-American route. I don’t specifically object to football or sports in general (in fact, I used to be a something of a sports geek, particularly football), but I don’t care about them any more. There isn’t a single sport that I pay even a moment of attention to. Super Bowl Sunday has become my favorite day of the year to go to a restaurant: as long as you avoid sports-themed places, they’re pretty much empty and you get fantastic service. 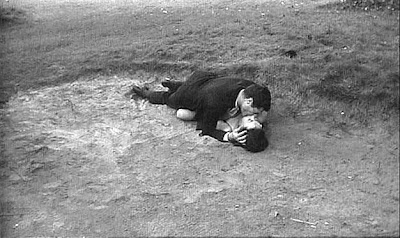 Anyway, since Super Bowl Sunday is effectively an American national holiday as important as any other (and more important than many), watching Antonioni’s La Notte (The Night) sounded like something as far away from watching grown men throw each other to the ground as I could find. There’s a part of me that truly enjoys this sort of cultural clash.

La Notte is the story of a failed relationship, pure and simple. We have two people who appear to be competent, decent people in most respects, but have, for one reason or another, grown completely apart. The first is Giovanni (Marcello Mastroianni), an author who has had some recent success. His wife is Lidia (Jeanne Moreau). As the film starts, they are visiting their friend Tommaso (Bernhard Wicki), who is in the hospital and dying. Lidia is disturbed by Tommaso’s obvious physical pain and lack of hope, while Giovanni stays with his friend and attempts to cheer him a bit. After Lidia leaves the hospital room, Giovanni is assaulted by a woman who tries her best to seduce him (rather violently and incompetently), and he is rescued by the nurses. When he tells Lidia of this bizarre encounter, she doesn’t seem bothered by it.

It’s Lidia who seems to be trying to recapture the past of their marriage throughout the film. At one point, she wanders off and ends up in the neighborhood they lived in early in their marriage. She is sentimental for it, almost wistful, while he is almost completely unmoved. And yet, despite her sentimentality for the past, it is she who also appears to truly understand the changed nature of their marriage. She is unmoved when she sees her husband flirting with another woman, and it is she who first realizes that any love they had has disappeared from the relationship.

There is no grand story beyond this one here. It’s not set against a particular backdrop or world shattering event; this is enough of something to concern us, despite it being a domestic drama without much impact beyond the two people in the marriage. Antonioni is simply showing us what happens when two lives that have meshed together drift away.

I won’t reveal the ending here, but that really is the only response I can offer from the ending we are presented with. I’ll leave it at this: while Lidia understands their relationship completely and accepts it, Giovanni appears to want to continue to live as if nothing has changed, and in fact appears desperate to prove to himself that life is exactly as it has always been.

This seems to be a theme for Antonioni, and it’s explored beautifully here. The dissolution of the relationship doesn’t come with massive fights, or loud arguments, but a resignation that this is simply something that has happened and is continuing to happen, not for any specific reason, but because this is something that happens. It’s a marriage that, for lack of a better way to put it, goes gently into that good night, having lost the will to continue struggling for its own existence. There is a melancholy here, a passive sort of ennui.

Had this not come two years before Fellini’s 8 ½, I’d suggest that this came as Antonioni’s answer to that film. As it is, I wonder instead if Fellini was addressing the same sort of issue in his film. It’s not a perfect match, of course, but there are some parallels—the same sort of loss.

So, La Notte is hardly a happy film, but I get why it’s worth seeing. It reminds me a great deal of L’Avventura, and seems a continuation on the same theme, that much of our struggle (or at least that of the idle rich) is one of boredom. The pernicious nature of that boredom is not that we are bored with our lives, but that we seem powerless to do anything about it.

Why to watch La Notte: A painful picture of the death of a relationship.
Why not to watch: The slow pace will be off-putting to many.