Film: Up in Smoke
Format: Streaming video from NetFlix on laptop. 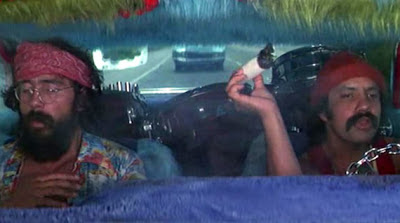 In the first couple of minutes of Up in Smoke (also known as Cheech and Chong’s Up in Smoke), Cheech Marin smells a young child’s poopy diaper and then pisses into a hamper full of clothing. If you thought this was going to be a high-brow comedy, this is to assure you that you’ve come to the wrong place.

It should also come as no surprise that the plot is ridiculously simple. Up in Smoke was specifically made for an audience so baked that it can barely remember its own name. Pedro de Pacas (Cheech) is a wastoid who is always broke. He spends any money he gets on weed and cosmetic enhancements to his p-o-s car. He’s also allegedly in a band, which is evidenced by several of the songs on the soundtrack that are obviously sung by Marin. We also meet Anthony “Man” Stoner (Chong), who is, if possible, a bigger waste. He’s kicked out of the house for being such a loser. The two meet when Pedro picks up Man, who has stuffed a couple of melons into his shirt to make him look more feminine, despite his beard. Har har har.

The duo spend the first half of the movie getting stoned on a massive joint, looking for pot and not finding it, and avoiding getting busted by the incompetent police force, headed by Sgt. Stedenko (Stacy Keach). Eventually, the two are deported to Mexico when one of Pedro’s relatives calls INS. See, he’s getting married in Mexico, and the INS will deport him, thus giving him a ride to his wedding for free, along with the rest of the wedding party. Once in Mexico, Pedro contacts his uncle to see if there’s anything he needs brought back. The two go to pick up the items, but go to the wrong address and end up with a van made out of pressed marijuana to smuggle back over the border. They’re almost caught a bunch of times and eventually end up competing in a cobbled-into-the-plot Battle of the Bands.

That’s pretty much it.

Here’s the thing: Up in Smoke isn’t funny. I mean really not funny. Just like drunk and stoned people aren’t funny when one is sober, the characters in this film are less funny and more generally embarrassing. Almost all of the jokes go on too long and aren’t that good in the first place. I imagine that this would be a lot funnier if I had been completely baked while watching. Then, watching Cheech Marin laugh uproariously at himself while sitting in a parked car might have actually done something for me. As I was not anywhere in the “baked” spectrum, it didn’t even manage to make me smile.

Additionally, the film plays everything for a stereotype. This is lowest common denominator stuff all the way through. Any racial joke, sexist joke, etc. that can be played is played, and most of the time, if the punchline isn’t stoner laughter, it’s obvious.

Here’s what I don’t get—I know that The List needs to have a certain number of films for a given year, and more than likely needs to have a minimum number of films in a given genre. While dramas dominate the list, there are smatterings of other film types here, and plenty of genres are really underrepresented, like horror, science-fiction, and comedies. But we don’t have to go any further than the same year to find a film that has a lot of the same types of drug culture jokes (although more booze than pot), the same sort of stupid hijinks, and is superior in virtually every respect: Animal House. The first time I came up with a list of films I thought were tragic misses on The List, I included Animal House not realizing it came out the same year as this one. Choosing this film over that one is the definition of a miss. Even if you end up thinking Animal House is ultimately just as unfunny and stupid as Up in Smoke, it’s certainly had a much larger cultural impact, and is essential viewing if only for John Belushi.

I can’t believe I’m about to say this, but I think the only way to really enjoy this film and see it in the right light is to cook up some hash brownies and watch it while eating a mountain of Doritos. I’ll pass, thanks.

Why to watch Up in Smoke: If you’re a stoner, you probably already love it.
Why not to watch: Unless you’re stoned off your ass, it’s just not that funny.

Email ThisBlogThis!Share to TwitterShare to FacebookShare to Pinterest
Labels: Cheech and Chong’s Up in Smoke, comedy, Lou Adler, Up in Smoke