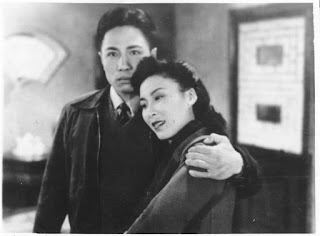 There’s been a fairly consistent effort on my part for more than a year to watch the earliest films on The List regularly. This actually has nothing to do with wanting to get past these films. It has everything to do with context. While I certainly haven’t shied away from the more recent films, I think I have a much better sense of these films having watched more from the earlier years. Today, I close out the 1940s (for now) with Xiao Cheng Zhi Chun (Spring in a Small Town).

This film was originally banned in its native China, although it is available now. I guess I can’t really be surprised that the film was banned during the political reign of Mao Zedong. This is the guy who, after all, attempted to destroy the past and erase the history of Chinese culture as being meaningless. Since its rediscovery, Xiao Cheng Zhi Chun is widely regarded as one of the great films of Chinese history. But it’s also sort of decadent in a Western/bourgeoisie sense, and I imagine that didn’t sit well with Chairman Mao.

The Dai family lives in a ruined house, half destroyed because of the war. Zhou Yuwen (Wei Wei) spends her day buying groceries and medicine and doing embroidery. Her husband, Dai Liyan (Yu Shi) claims to have tuberculosis, but Yuwen is somewhat sure that he is malingering. In truth, he is depressed over the state of the family house and fortune, because he remembers it in its glory before it was partially destroyed. His younger sister Meimei (Hongmei Zhang) doesn’t remember the early days and lives a carefree existence. Yuwen and Liyan do not have a carefree existence. The sad state of their marriage weighs heavily on both of them. With Liyan sick for six of the eight years of their marriage, they have lost intimacy and love, although they do seem to care for and respect each other.

Trouble happens with the arrival of Zhang Zhichen (Wei Li). He is the boyhood friend of Liyan and went away, traveled all over China, and became a doctor. What Liyan doesn’t know is that Zhang and Yuwen were once in love and were almost married. Their feelings for each other don’t take long to come to the surface. Naturally, Liyan is oblivious to this and things instead to set up Zhichen with Meimei when she comes of age.

That’s really the whole story here—we have a past love showing up in the present day of the characters and exposing their marriage for the faded, loveless union it has become. Naturally, both are tempted by the sudden appearance of a former lover, and this is exacerbated by Liyan’s illness and guilt. In fact, he says more than once that things would be better had Yuwen married Zhichen, not realizing exactly the pain he’s bringing up with those statements.

This is a film that requires a great deal of patience to get through, not only because of the snail’s pace of the story. No, the pace is slow, but it’s also dreamy and worth seeing. The problem here is that Xiao Cheng Zhi Chun is in bad need of being restored by some caring people who would like to return it to its former glory. There are snaps and pops on the soundtrack and one or two places where it fades out entirely, at least on this version. The film has also faded into blurs at points, making the viewing challenging.

It’s a shame, too, because I think this really might be the sort of slow-paced tragic romance that I really enjoy. It reminds me a great deal of In the Mood for Love in terms of its pacing and story, and ultimately in terms of the way the story plays out. This isn’t merely the simple story of two former lovers reuniting, but of two former lovers reuniting under circumstances that force them to stay apart from each other. In fact, the bulk of the tragedy here and thus the bulk of the dramatic action comes from this conflict between love and duty. Is it more important to follow the heart or to maintain the traditions and dictates of conscience?

The way the film plays out, the pace, and the overall story mark this is a film very much a product of its time and culture. I don’t think this is a film that could be remade today without keeping it a period piece in some respect. It almost needs to be set in the past since much of what goes on here simply conflicts with a number of modern attitudes.

Xiao Cheng Zhi Chun is a film I wanted to like more than I did, but the problems I had with it were strictly based on the poor quality of the print. I can’t fault the movie for aging, and so I won’t, but the state of the film is in such a condition that the film is difficult to recommend without someone going in and rescuing it for posterity.

Criterion, you listening? Xiao Cheng Zhi Chun might be one to look at.

Why to watch Xiao Cheng Zhi Chun: Chinese cinema from its classic period.
Why not to watch: It desperately needs to be restored.