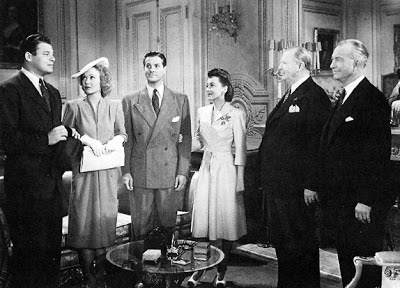 Regular readers of this blog know that my classic movie dream girl is the incomparable Barbara Stanwyck. My co-worker Ron’s Golden Age crush is Olivia de Havilland. I get it. He could certainly have chosen a hell of a lot worse. De Havilland was an accomplished actress and pulled two Oscars in her day. Princess O’Rourke is evidence of something far less seen in her acting repertoire: comic timing.

Princess O’Rourke is, on the surface, a pretty standard not-quite screwball romantic comedy from the war years. What sets it apart from the standard is not the presence of a title character who is a princess or a plot that is connected to the war and to morale. No, the main difference here is a whip-cracking script and some genuinely funny moments that raise it a couple of miles above the standard rom-com.

Maria (de Havilland) is a displaced princess forced to live in America because of the war in Europe. Her uncle (Charles Coburn) is anxious for her to get married and start producing a line of male heirs, both to secure the succession of the crown and for morale reasons. The main suitor is Count Peter de Candome (Curt Bois). He’s an oily, reedy little man with a strange facial tic, and Maria is less than interested in him. Sadly, he’s about the only choice there is for a royal wedding. To perk up her spirits, Uncle Holman decides Maria needs a holiday in San Francisco and puts her on a plane. Maria is a bad flier, though, so he recommends that she take a sleeping pill on the flight so she won’t have to deal with any anxiety.

Of course, this is a comedy, so things don’t go as planned. Three individuals give her sleeping pills, which knock her straight out. When the plane encounters heavy weather, it’s forced to turn back, and the young lady in the sleeping berth won’t wake up. It falls to the pilot, Eddie O’Rourke (Robert Cummings) to take care of her. Unable to get her to wake up fully, he drags her to a restaurant to feed her coffee so she can tell him where she lives. The counterman, mistaking what’s going on, slips two more sleeping pills into her coffee, and she’s out like a lamp. Eddie has no choice but to take her to his apartment. Fortunately, his co-pilot Dave (Jack Carson) lives nearby and Jack’s wife Jean (Jane Wyman) arrives to take care of the incapacitated girl.

The next day, Maria wakes up in a strange apartment in someone else’s pajamas. She tries to make sense of the day, and eventually meets up with her benefactor. She spends the day with him as well as with Dave and Jean. As a cover for her real identity, she calls herself Mary Williams and claims that she was going to San Francisco to work as a maid. Of course, she and Eddie fall for each other pretty hard. Since Eddie and Dave have enlisted and are going off to the air force soon, Eddie decides he’ll marry the poor little refugee, not knowing that she’s actually a princess.

The rest of the film sees the marriage off, on, off, on, off, and on again due to varying circumstances. The end result involves the White House, FDR’s dog Fala, a Supreme Court justice (Harry Davenport) and involvement from the State Department in the form of Mr. Washburn (Minor Watson). And, as should be no surprise, everything turns out for the best.

There aren’t any real surprises in the plot of Princess O’Rourke. Of course there will be obstacles placed in the paths of our young romantics. Of course there will be a standard serving of pro-American wartime propaganda, as befits a film made in 1942 and released at the height of the War. No, the real surprises come from clever dialogue and some really entertaining set pieces that occur throughout the film. Take, for instance, Maria’s awakening in Eddie’s apartment. She has no idea where she is nor how she got into the giant-on-her pajamas. She walks out of the room and sees before her, hanging from the ceiling, a series of shoebox lids. Each has a message on it, asking her to meet him later that day. One holds a toothbrush with the word “NEW!” scrawled near it. The final sign, displayed on the mirror, comments on an evidently embarrassing birthmark somewhere on her royal person. This gets played for a few laughs as she contemplates that message through the rest of her day, and she’s not let off the hook until later that night when Jean admits to undressing her the night before.

Another great comic moment involves Eddie and Dave having an impromptu steam bath interrupted by a practice air raid. What’s noteworthy is just how understated so much of the comedy is—we get a glimpse of the situation, and bang—we’re on to something else. It doesn’t dwell on the comic pieces, but offers them as a part of the continuing story. It gets laughs both because it’s funny and because it doesn’t try to milk them.

Olivia de Havilland, known mostly for dramatic and serious roles, is wonderfully cute in this film, and shows great comic ability. Not only is her timing good, her expressions are dead on. Similarly, Robert Cummings is charming and forthright, and just enough of a goof to be endearing.

Like many “lesser” films of the era, Princess O’Rourke is all but forgotten, and that’s a shame. With a couple of twists and a little script massaging, this could easily be remade today, and only the less modern parts of the script needing to be changed. Certain parts of this script could be kept almost exactly as written. That’s the sign of a film worth seeing: despite its age, a great deal of it manages to carry through to the present day.

Having seen it, I’m not surprised it was nominated for Best Original Screenplay, and not terribly shocked that it won.

Why to watch Princess O’Rourke: A genuinely funny rom-com.
Why not to watch: The “I’m lucky to be an American” speech is pretty heavy-handed.