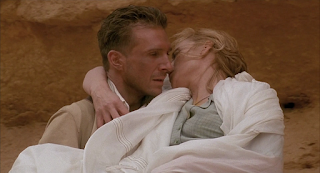 While I currently have fewer than 200 films to watch to finish up the full 1001 List, I have a surprising number of Oscar winners and nominees still to see and review. I’m frequently surprised at how many there are left, so I’m going to try to make a larger effort to get through more of them sooner rather than later. To continue things from yesterday, what could be more appropriate for Valentine’s Day than The English Patient? This is grand romance in the classic tradition, epic in scale and length, making it perfect Oscar bait.

The film takes place about half in the present day of the film (late in World War II) and half in the years before that. A badly burned man (Ralph Fiennes) is being cared for in a desert hospital by a French-Canadian nurse named Hana (Juliette Binoche). The man, partly because of his past and partly because of amnesia, refuses to divulge anything about himself, and so he is referred to only as the eponymous English patient. In reality, he is Count Laszlo de Almasy, a cartographer attempting to map the Sahara in the pre-war years.

Through a series of flashbacks, we learn of de Almasy’s work as a cartographer, and of the lives of others who work with him. Among these are Geoffrey Clifton (Colin Firth) and his wife Katherine (Kristin Scott Thomas). Geoffrey is frequently away from the cartography group, and slowly, a romance starts to blossom between Katherine and de Almasy. It goes hot and heavy for a bit directly under the nose of her husband and everybody else, and then falters. Katherine is guilt-ridden over the infidelity, and de Almasy is jealous of her marriage to another man.

Meanwhile, back in the present, a man named Caravaggio (Willem Dafoe) arrives at the house where Hana and de Almasy are staying. Another Canadian, he was employed by the Allies as a spy, and was captured by the Germans, who cut off his thumbs. He holds de Almasy in part responsible for what happened to him, and as he has extracted revenge on everyone else who he holds responsible for his thumbless state, he plans to revenge himself on the Count.

Additionally, we learn that Hana believes herself to be cursed. In her world, everyone to whom she becomes attached dies. So when she begins her own romance with a Sikh bomb disposal expert named Kip (Naveen Andrews), things become increasingly tense for her.

What’s interesting to me is where the tension comes from in this film. For much of the film, at least in the flashbacks, the tension comes from the illicit romance, and even here, there isn’t a great deal. It’s simply an illicit romance between two people, and even here, there isn’t a great deal of tension. There is only a small level of tension in the fear that they will be caught, and even then there isn’t a great deal. In fact, the only real tension evident in this film is a desire to know what has happened and how de Almasy ended up this charred husk of a man lying in a bed awaiting his inevitable death. As the film progresses, we get smaller and smaller pieces of the picture until, at the end of the film, we see the entire picture of the love between Laszlo and Katherine, what happened to both of them, and the true tragedy of their lives.

Like any true epic film, the landscape itself is a major character, and The English Patient takes a great many cues from films like Lawrence of Arabia in its use of expansive desert landscapes. The photography is truly beautiful here, and something that is worth seeing even if the film were not.

So really, what we have here is a classic tragic romance unfolding (as many do) with a backdrop of war. There’s a doomed feeling throughout, particularly because we know that de Almasy will eventually end up as the burn victim slowly dying in a bed. And it’s a beautiful tragedy throughout. What it’s not is very exciting. It absolutely managed to keep my interest throughout, start to finish, but there were some moments when I found myself mentally wandering a little or focusing on something that wasn’t specifically part of the main story. In addition to having a doomed quality, it also has something of a dream-like quality to it. Like the desert sands, it drifts a bit, and I mean that not as a negative, but only as an observation.

I would be remiss not to mention Ralph Fiennes’s burn makeup. It’s too much of a coincidence that much of the scarring has the same visual quality as the desert landscape, and I’m certain that this is intentional. It doesn’t, however, always look that convincing. At times, it works, but at other times, Fiennes simply looks ancient and wrinkled, not burned.

I can’t say I didn’t enjoy this film, but I also didn’t love it. It has all the earmarks of romance in the grandest of traditions, but seems too emotionally level throughout to really qualify as a great one. In fact, the grandest passion exhibited is when Caravaggio pleads for his thumbs. The passion, while evident at times, simply fizzles, and ultimately, the love that should drive the film ends up a bit of a wet match.

Why to watch The English Patient: A three-hanky romance.
Why not to watch: Ralph Fiennes’s burn make up just makes him look really old.