For Me, that Something is Pain

Film: There’s Something About Mary
Format: DVD from Rockford Public Library on laptop. 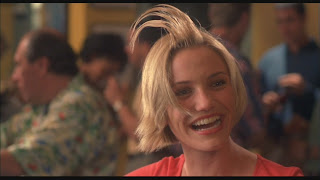 I was worried when, in the opening five minutes of There’s Something About Mary that it appeared that a person with some form of mental disability was going to be made into a stooge for some unpleasant humor. I mean, there’s bad taste and then there’s really bad taste. I don’t mind some humor that edges past the boundaries of good taste, but getting the mentally disabled guy beaten up in the first few minutes of your film? There are places you just don’t go.

Fortunately, we don’t go there. That’s the only place the Farrelly Brothers don’t go in There’s Something About Mary. Anything else is on the table. My guess is that almost everyone reading this has seen this film, so I won’t go too much into detail here. I will say that I have a history with this film. My history is that the first (and only, prior to today) time I tried to watch it, I walked out less than an hour in. That doesn’t bode well.

I know part of the reason why. I don’t find stupid people funny. More to the point, stupid people doing stupid things doesn’t do anything for me. I get no pleasure from it. One of the reasons I like a film like A Fish Called Wanda is that the majority of the characters are at least of average intelligence. Watching them do stupid things is funny. Watching idiots be idiots and assholes be assholes just doesn’t do anything for me. I find it hard to care and harder to laugh. I’m also not a huge Ben Stiller fan, so the film has that going against it, too.

Ted Stroehmann (Ben Stiller) had a tragic and embarrassing incident the night of prom in the house of Mary Jensen (Cameron Diaz). He loses touch with her but, 13 years later, can’t seem to shake the idea of her. On the advice of his friend Dom (Chris Elliott), Ted hires Pat Healy (Matt Dillon complete with perv mustache) to locate her in Miami. Mary, of course, is still perfect. If we didn’t know this from Ted’s remembrances, we’d learn this from the fact that every man who Mary encounters falls madly in…well, I don’t want to call it love. Every man becomes obsessed with her. Healy lies to Ted and moves to Miami, where he starts lying to her about his life to get her interested in him. Another guy pretends to be a crippled architect to get close to her, too. And Ted is still after her. And it turns out Dom was a former boyfriend and is still obsessed with her. Oh, and she used to date Brett Favre, and he’s still obsessed with her.

Whatever. The entire film is a bunch of guys jumping around Cameron Diaz, trying to get them to notice them and a lot of somewhat offensive jokes and painful slapstick. This is another film where pretty much everyone is a jerk, and so there’s no one to latch on to. I’d happily latch onto Mary as someone to root for, but she’s dimwitted enough to not be aware of all of the stupidity going on around her and ultimately doesn’t seem to care that all of these guys have created bizarre, elaborate fantasies around her and think nothing of lying to her about anything and everything to get into her pants.

I had an extremely difficult time getting through this movie. My gut instincts however many years ago when I tried to watch it the first time were dead on. As a matter of fact, I’ve had this in the player for a couple of days in an effort to get through it, and routinely took it out and watched something else instead. Even more, this is not the first time I’ve had it out from the library and attempted to watch it. I just couldn’t pull the trigger on it because I didn’t want to watch it. Okay, I’ll give you the part where Matt Dillon tries to shock the dog back to life and lights it on fire as funny, but most of the time, I was just cringing. And the end? Arguably the stupidest ending of the last 20 years. Okay, it’s not Joe Versus the Volcano bad, but it’s still pretty stupid.

I should talk for a minute about Ben Stiller. I’m not a fan. I find him really hit or miss. There are times when I like him or like films he’s in (Dodgeball, Zoolander, The Royal Tenenbaums) but plenty of times when he does nothing for me and doesn’t make me laugh once. This was one of those films.

I’m done with it and I can breathe a sigh of relief. I know this film has tons of fans. I appreciate that it does, and for a lot of people, this really works as a comedy. It simply doesn’t for me. I can get behind the obnoxious humor and the slapstick. I’m down with a joke that a lot of people might find tasteless and good slapstick is always fun. I just can’t deal with the personalities in this film. These aren’t people I want to spend time with, and there’s no catharsis for me in seeing bad and embarrassing things happen to them.

Sorry, Farrelly Brothers. Maybe next time. And damn it, I just realized I have Meet the Parents still to come.

EDIT: It's worth noting that when I said that making fun of the mentally disabled is the one place the Farrellys don't go, I didn't go into detail there, and there are two things worth mentioning here. First, they do kind of go there, but it's worth noting that any time someone does something particularly ugly to a mentally disabled person, that offender is made out to be a jerk or stupid. No one benefits from it, and they often pay for it. Second, when I say they go everywhere else, I mean it. Prison rape is alluded to as a joke. Now, we live in a society where, a few days ago, the host of the Oscars sort of made light of women being exposed in film, sometimes in rape scenes. I get the outrage. So where's the outrage for prison rape played for comedy? Somehow this is okay? If we are rightly going to protest the rape of a woman played for comedy, why should we accept it (and even laugh at it) when a man is subjected to the same thing?

Why to watch There’s Something About Mary: Screwball comedy for the modern age.
Why not to watch: It doesn’t go past the border of good taste; it builds a house there and charges rent.