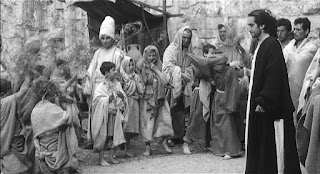 This one is going to be rough. Keeping in mind that I do my best to maintain an open mind for all films, it is impossible not to pre-judge some films. I knew going in to Il Vangelo Secondo Matteo (The Gospel According to St. Matthew) that it was a biblical story following the life of Christ. Despite my lack of belief, I’m okay with this. I’m happy to watch something in which I have no spiritual investment. Plenty of films of religious impact have impacted me regardless of my beliefs. No, the problem with Il Vangelo Secondo Matteo is that it is an almost direct interpretation of the biblical gospel, including a great deal of dialogue taken directly from scripture.

It would be easy to suggest that this is cause of my problem here, and it is, but not for the reason you may think. No, the problem is that it’s nothing new. Hell, I grew up going to church and spending Sunday afternoons in youth group meetings. I know about the Sermon on the Mount and the loaves and fishes. I’m aware of the stories of healing lepers and cripples and the water into wine. Pasolini’s film is less an interpretation of these stories and more the most direct and literal version of the gospel that he could manage to present. It’s just miracle-miracle-miracle, platitude-platitude-platitude, crucifixion, resurrection. Seriously, if have any background in Christianity, you know these stories and can almost feel what is coming next.

For instance, when we see a cripple walking slowly with crutches, you know that a healing is going to happen soon enough. When we see a crowd of people and are told they should be allowed to go to the town to buy food, it’s evident that the miracle of the loaves and fishes is upon us. Christ (Enrique Irazoqui) tells the disciples to go on without him, and we see the disciples in a boat. Is it surprising that this happens 10 seconds before we see Christ walking on water?

And that’s it. I feel like there’s not anything to write about. If you grew up without religion or in a different religion, some of these stories might be new to you, but even then, I don’t see how this can be true. If you grew up in the West (and in particular in the United States), these stories are referenced constantly. Here I am, at about half the length of a typical review, and I feel like I’ve said everything I have to say about this one. That Pasolini filmed it in a minimalist style only adds to my lack of anything much to say. There are a lot of close-ups. There are a lot of shots of Italy substituting for Judea. Everyone looks Italian, adding to the societal conceit that Jesus Christ was a white man.

I don’t know. I can’t see anyone being interested in this film without being familiar with the story, even if that familiarity comes through cultural osmosis. As filmed, it’s simply not compelling enough to be worth watching. It washes over me without leaving anything behind, just another version of the story that I grew up listening to every Sunday. This story does not appear to be enhanced in any way be flat line readings or strange jump cuts from point to point.

I tried. Really, I tried, but an hour in and I was ready to move on to something different. Still I soldiered on, hoping that at least there might be something interesting going on when it came to the crucifixion. But even here, Pasolini’s minimalist filming didn’t offer much new, and in fact offered much less than other films. There’s no sense of wonder or grandeur here, and I’m sure that’s intentional. Angels arrive as messengers, and they look like everyone else. Satan tempts Christ, and he looks like just another person. In fact, it took several lines of dialogue before I figured out that the scene in question depicted Christ in the wilderness.

I can appreciate the minimal style for what it is, but it’s so visually bland that I found myself constantly wandering.. Even the story of Salome plays out like not much—a girl dances around a bit clumsily and John the Baptist (Mario Socrate) is decapitated. And?

I’m completely underwhelmed by this film. I always want to like what I watch, but the combination of myths that I already know well and a style that offers nothing new combine to produce a film that offers nothing that interesting. Okay, not nothing. The Pharisees have some pretty rocking hats.

Why to watch Il Vangelo Secondo Matteo: The story it tells is the base for a great deal of Western culture.

Why not to watch: It’s likely you won’t remember much specifically when it’s done.