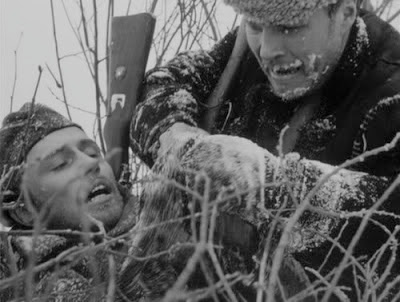 There’s something about Soviet films that I find depressing. In part, that’s sort of what Soviet films are, even when they’re trying to be inspiring. There is a deep sense of fatalism, of great suffering as the only guarantee. When I say that such films often leave me cold, I don’t mean that in a figurative sense, but a literal one—to enhance the guaranteed suffering, these films are frequently set in winter with tons and tons of snow. With Voskhozhdenie (The Ascent), we get all the suffering at once, and within the first five minutes. A group of Russians, some soldiers and some civilians, are on the run from invading German troops some time during World War II. They’re freezing and virtually out of food.

Desperate for food, two of the men are sent off to find something to bring back to the partisans. These men are Sotnikov (Boris Plotnikov) and Rybak (Vladimir Gostyukhin). Of the two, Sotnikov appears the more fatalistic, almost working under the assumption that he is going to die; this is no doubt influenced by his being wracked with fever. Rybak is fatalistic, too, but also seems to maintain some level of cheerfulness despite himself. The two find a far destroyed by the Germans, then make it to a small village where they take a sheep from the head man (Sergei Yakovlev), partly because they need the meat and partly because his position as village elder means that he is collaborating with the Germans, at least on the surface.

Once they have they sheep, they try to head back, but are ambushed by a German patrol. Sotnikov is shot in the leg, and Rybak drags him along to a farmhouse where they hole up. A woman named Demchikha (Lyudmila Polyakova) lives here with her three kids. It doesn’t take long for the Germans to show up here; Rybak outs them when he believes the Nazis will fire into his hiding place and the two men, along with Demchikha (since she was apparently harboring partisans) are dragged off for interrogation.

This takes us a good way into the film, but there’s quite a bit left. What remains, more or less, is the moral struggle of these two men. Sotnikov, feverish and wounded, believes in the ideals with which he has been instilled, and is more than willing to undergo any torture and provide any sacrifice for the good of the partisan group’s safety. Rybak, on the other hand, is looking only to survive and rationalizes every decision he makes, up to an including joining with the Belarusian Auxiliary Police, who work for the Nazis.

I can only imagine that Larisa Sheptiko’s film was highly regarded within the Soviet state. It’s a typically American thing to say (especially an American-during-the-Cold-War thing to say) that anything that was produced with the full endorsement of the Soviet regime is going to, at some level, be a propaganda film. I’m aware enough to say that a lot of American films of the era fit that description, too, but it doesn’t change the fact that this one isn’t that hard to read in terms of straight propaganda. Sotnikov is younger, more attractive, and far more noble than Rybak (who looks sort of like the long lost twin of Tom Waits). The Belarusians who have sided with the Nazis are all portrayed as slobs and degenerate. The Germans and the collaborators are, of course, Nazis, and their portrayal is about what you expect.

But, because he is the one character who vacillates between his desire to do the right thing and his desire to do anything necessary to survive, it is Rybak who is by far the most interesting character here. Sotnikov never veers from the path of Soviet strength and righteousness—he’s sort of the doomed John Wayne figure encompassing every high-minded ideal of the glorious collective. Rybak, though, needs to go through a few dark nights of the soul before he is capable of seeing the light. His struggle is front and center, and while a little histrionic in places, still manages to be gripping all the way through. His rationalizations are smart, because they make sense to him, and make sense when he makes them—he gave himself up (in his mind) not because he was frightened of being killed, but to spare Demchikha and her children, for instance.

Sheptiko filmed Voskhozhdenie in a lustrous black-and-white that is beautiful for the most part. There are a few spots where the camera slides out of focus or is obviously hand-held for what should be a steady shot, but these don’t detract from the overall look and feel of the film. She also doesn’t hold back some of the more gruesome aspects of war. We don’t see anything too terrible or brutal in terms of torture—everything is implied—but we do get some pieces in the aftermath that are mildly shocking and pretty gross.

Despite the massive appeal to Soviet solidarity, this is a tremendous film. It’s a gripping portrait of these two men placed in a terrible situation and a realistic portrayal of their actions under extreme duress. This is the real strength of Voskhozhdenie more than anything else—despite any political motivation or intention, it still manages to come off as extremely real.

Why to watch Voskhozhdenie: A stark portrayal of two men living and dying for their ideals.
Why not to watch: It’s so pro-Soviet, it makes Lenin sit up in his glass case.