Did He or Didn't He? 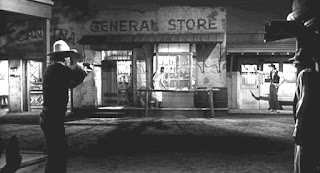 Think just for a moment about John Wayne. You can see him, right? You can hear him talking, right? I’d guess there’s a 50/50 chance that you’re imagining him calling somebody “Pilgrim.” If that’s the John Wayne mental stereotype you’ve pictured (it certainly is for me), you have The Man Who Shot Liberty Valance to thank for that mental picture. He says that word probably more than any other in this film.

I’ve mentioned my relationship with Westerns in the past, but I’ll sum it up here for reference. Few genres of film are so likely to fall into cliché as the Western, which means that for a lot of them, if you’ve seen one, you’ve seen a ton. This also means that Westerns that manage to get away from cliché or do something more than show us six-guns and horses have the potential to be extremely interesting. The Man Who Shot Liberty Valance is such a film, because it plays with those Western conventions and gives us something different from good guy-bad guy to think about.

We start in the film’s present day, with Senator Stoddard and his wife returning to the town of Shinbone. It’s evident that Stoddard is an old political hand, and he freely offers the reason for his return—the funeral of a man named Tom Doniphon. We learn that Stoddard is renowned as the man who shot Liberty Valance, an act that led to his political career, but Stoddard decides it’s time to set the record straight, and we spend the bulk of the film in this flashback.

Naïve lawyer from the east, Ransom “Rance” Stoddard (James Stewart) arrives in the town of Shinbone to set up a law practice. His stagecoach is stopped and robbed by a gang of men led by the notorious Liberty Valance (Lee Marvin). Rance is robbed of his possessions, and when he protests Valance assaulting a widow, Valance beats him repeatedly with a whip. The half-dead Rance Stoddard is dragged into town by Tom Doniphon (John Wayne) and nursed back to health by Hallie Ericson (Vera Miles), who Tom is sweet on. As he recovers, Rance goes to work for Hallie’s parents, Nora (Jeanette Nolan) and Peter (John Qualen). Throughout his recovery, Ranse vows to put Liberty Valance in jail through legal means; Tom warns him to get himself a gun, because that’s the only law that matters in Shinbone.

We also meet the town marshal, overweight coward Link Appleyard (Andy Devine) and the publisher of the local newspaper (and town drunk) Dutton Peabody (Edmond O’Brien). Another chance encounter with Liberty Valance in the Ericson’s restaurant brings things to a head between Ranse, Tom, and Liberty. Meanwhile, Ranse has taken it upon himself to teach many of Shinbone’s inhabitants, including Hallie, to read.

Things come to a head when the territory that Shinbone is in goes to vote on an application for statehood. The large ranchers want to remain a territory, because it gives them a greater amount of freedom and power. However, a larger section of the population wants statehood to protect their interests from those of the ranchers. The ranchers, led by Major Cassius Starbuckle (John Carradine) hire Liberty Valance and his band of goons to put the fear of God into the populace, to either prevent them from voting or to scare them into doing things the way they want. This brings things to a head and results in a duel between Rance Stoddard and Liberty Valance. Against all odds, Rance emerges with a wounded arm, but Valance lies dead in the roadway. Of course, it was really Tom Doniphon, aided by his worker Pompey (Woody Strode) who gunned down the bad man, something he eventually admits to Rance. And of course, Rance’s courage under fire and his teaching causes Hallie to fall for him despite Tom’s love for her.

It’s a pretty good story, but it’s a better message underneath. The film is about the difference between the reality of a story and the legend that grows from it. Rance Stoddard’s entire professional life came from an incident in which the actions of another person were attributed to him. In a very real sense, his life is kind of a lie. The film is smart enough to make him a forthright person and likeable, and smart enough to make him feel guilty initially for being famous as the man who shot Liberty Valance, and guilty in a different way for capitalizing so completely on the actions of Tom Doniphon.

If the film falls down anywhere, it’s Link Appleyard, the cowardly marshal. Andy Devine plays this fat, whining, stupid jerk of a character as the biggest waste in the town, and there wasn’t a single scene that involved him that I didn’t want to reach in and slap him. Even his voice grates on me, and did so every time he spoke. I know he’s a comic relief character, but he wasn’t that funny (or at all), and served no purpose other than being annoying. He did nothing positive or negative at any point in the film to justify his presence other than be too scared to arrest Liberty Valance in the first place.

Other than that, though, the story of this story is very much worth seeing, even if you will get tired of John Wayne calling James Stewart “pilgrim” every couple of minutes.

Why to watch The Man Who Shot Liberty Valance: A perfect lesson in the difference between fact and fiction.
Why not to watch: You’ll want to punch Andy Devine in his fat, whining face.