Not a Fairy Tale

Film: C’era Una Volta il West (Once Upon a Time in the West)
Format: Streaming video from NetFlix on laptop. 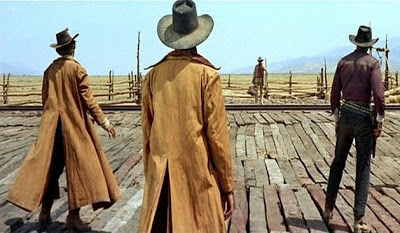 I doubt I will have much new or original to say about Sergio Leone’s C’era Una Volta il West (Once Upon a Time in the West). This is a film widely considered one of the all-time great Westerns in film history. I very much feel like the last person in the world to see and comment on it. In an effort to at least be honest and stick with only my own thoughts, I’m writing this initially in longhand while watching, so at least my thoughts will be my own, even if they’ve been uttered by hundreds (or thousands) before me.

The genius of C’era Una Volta il West can be seen in the way the first act unfolds. Leone introduces us to the principle players in stages, giving us enough of a glimpse to define each character without a complete picture. We start with a long tension-building sequence as three men wait for a train. The train arrives and a man appears on the platform. This is Harmonica (Charles Bronson). The three men have been sent to kill him by someone named Frank. One short burst of violence later, and Harmonica is patching up a wounded arm while the other thre lie dead. And that’s all the introduction for Harmonica we need.

Next, we go to Sweetwater, a patch of desert that houses the McBain family. The McBains own a piece of land that holds the only good water for miles—a necessary spot for a station when the railroad comes through. This means everybody wants the land, so it’s not surprising when a gang of outlaws shows up and guns down the entire family. As the last remaining McBain, a young boy, stands looking at the killers who have murdered his father, brother, and sister, the leader Frank (Henry Fonda) guns him down.

This is pure cinematic genius on almost every level. First, it absolutely identifies Frank as heartless and ruthless. Second, it’s Henry Fonda. For more than a generation, Fonda portrayed the sorts of characters people identified with nd wanted to be. In film after film (The Ox-Bow Incident, 12 Angry Men, The Grapes of Wrath), he was the guy with the highest ideals and the staunchest moral character. And the first thing we see him do is gun down a child in cold blood. It’s as if Leone is telling us that he’s giving himself license to do anything he wishes, no matter how much we might object.

Our next meeting is with Jill McBain (Claudia Cardinale), the wife of the recently-slain McBain and sudden owner of Sweetwater. Before she discovers this, she stops on her way at a small outpost. It’s here we meet Cheyenne (Jason Robards), an outlaw who may or may not have a history with Harmonica. Jill McBain’s first act as the mistress of Sweetwater is to bury her family. Her second is to protect her land from all comers. Frank and his crew have framed Cheyenne for the murder of her family in an effort to protect their real boss, railroad tycoon Morton (Gabriele Ferzetti).

All of this pins together with surprising ease. Morton wants the land for the train and sends Frank to do the dirty work. Harmonica has a long-seated grudge against Frank that comes out in the course of the film. Cheyenne is more or less trying to protect his own reputation, not wanting to claim any crimes that aren’t really his. And, of course, it all ends in shooting because this is a Western, and you can’t get to the end without smoking irons and guys getting shot off the roof of a saloon, or perhaps a theater under construction.

It may not be fair to suggest that C’era Una Volta il West is, in almost every respect of the plot, a completely standard Western. It blends two of the most traditional, stereotypical Western sagas into one, the standard revenge plot between gunmen and the “here comes the train” westward expansion. To hit the trifecta, it only needed cattlemen vs. farmers. But here’s the thing: it does both of these plots about as well as anyone ever has.

There are moments when Leone’s penchant for building tension by having nothing happen goes on too long, but only a couple of times. Most of the time, it’s damned effective. The opening 10 minutes, culminating in Harmonica’s laying low of three thugs, for instance, happens with very little motion on screen and virtually no dialogue. It’s just waiting, and it’s enthralling the whole time. In that respect, while it runs about the same length as Leone’s more famous The Good, the Bad and the Ugly, it also suffers much less need of editing. Throw in great performances by Bronson, Fonda, Cardinale, and Robards, and you have a film that may be a bit predictable in plot and a shade overlong, but that does not disappoint in any respect.

A note on Jason Robards—this guy is a two-time Oscar winner, and no one seems to remember him. He deserves better, and you should hunt down some of his movies and watch them. The man was a hell of an actor, and in this film, it’s impossible not to watch him when he’s on screen.

The final two notes regard things for which Leone is rightly regarded. First, the cinematography here is spectacular. Wide open spaces and desolate landscapes that truly offer a sense of this open country. Beautiful stuff. Second, Leone tapped the great Ennio Morricone for the soundtrack. Few do a soundtrack as well as Morricone in general, and few do it as well as he does here. The blend of old and new, the repeated themes with different instruments, picked up by a harmonica in key places…it’s filled with musical cues that actually help keep the story straight. You can’t ask for more from the music than that, can you?

Why to watch C’era Una Volta il West: As good a Western as you’ll find.
Why not to watch: If I have to nitpick, the Italian actors don’t match their dubbing, but that’s really it.

Email ThisBlogThis!Share to TwitterShare to FacebookShare to Pinterest
Labels: C’era Una Volta il West, Once Upon a Time in the West, Sergio Leone, western