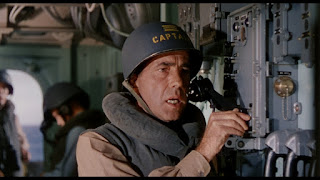 I’ve come to the realization that when it comes to war movies, my favorites are either prison pictures or naval pictures. Oh, I don’t have a real problem with aerial combat or tank battles, or guys slogging it out through hedgerows. But when I think about the war films that really get me going, they tend to revolve around POWs or take place on ships. Maybe it’s got something to do with the principles being confined in some way—the limited space for people to move around evidently ramps up the drama for me. Such is the case with The Caine Mutiny, one of my absolute favorite war films.

Our evident main character is poor little rich boy Willie Keith (Robert Francis), fresh out of officer training and raring to go with his naval career. On the one hand he is romancing nightclub singer May Wynn (playing a character of the same name), and constantly badgered by his connected and influential mother (Katherine Warren). While he’d love to be assigned to a major ship of the line, Keith is instead sent to the Caine, a battle-scarred minesweeper desperately in need of rest and refit. He discovers a crew that is superficially lax but actually efficient and well-trained under the command of Commander DeVriess (Tom Tully).

Keith strains under this evident laissez-faire command, but is smart enough not to complain to fellow officers Steve Maryk (Van Johnson) and wannabee novelist Tom Keefer (Fred MacMurray). Keith is the only one overjoyed when DeVriess is transferred off the ship and replaced by a spit-and-polish captain named Queeg (Humphrey Bogart).

His joy is short-lived. Soon everyone on the crew learns a number of things about Captain Queeg. First, his spit-and-polish reputation is not simply something he takes seriously. In fact, it’s an obsession with him. Seeing a sailor with his shirttails untucked causes him such a huge distraction that he forgets to give an order to steer the ship and ultimately runs over a cable the Caine was towing. He soon gets a reputation as a coward for dropping a dye marker too far from the beach while under fire during a beach landing operation. And he becomes increasingly paranoid, forcing an insane level of investigation to discover who stole a quart of frozen strawberries. Keefer tries to convince Maryk and Keith to take over the ship due to Queeg’s incompetence, mental imbalance, and paranoia.

At a critical point, the Caine is caught in a typhoon. Unable to make a decision to stop the ship from foundering, Queeg stands mute on the bridge and Maryk takes over to steer the ship to safety. This results in mutiny proceedings, which take up the last half hour of the film. Maryk is brought up on charges, with Keith waiting in the wings for his own trial. Maryk’s prosecutor (E.G. Marshall) and his defender (Jose Ferrer) match wits to determine the fate of one loyal officer over another.

There are a lot of elements to The Caine Mutiny, and it gets them all right. First and foremost is a whipcracking script. Everyone involved on the ship, every single main character, is a bright guy. This makes them interesting to watch, and really puts the end result in doubt. Queeg might well be a broken man in this film, unable to admit fault and taking every mistake and setback as a personal affront, but he’s not a dumb man. Keefer is a sinister bastard, wanting someone else to take risks he won’t and manipulating everyone around. Keith might be the dumbest of the lot, and really, he’s more or less simply inexperienced.

We also get some great performances. Fred MacMurray is Machiavellian, aping sympathy when Queeg goes on one of his rampages, but never doing anything to put himself in any real danger. Van Johnson’s portrayal is also noteworthy. At all times, it’s evident what is going on in his head, weighing evidence of Queeg’s madness against what will happen to him and his career if he assumes command. Of course, it’s Humphrey Bogart’s performance that truly makes the film. For years, Bogart had played the hero, the man we root for, and here he is the opposite of a hero.

If there is something I’d cut here, it’s the love story. There’s no real need for Keith’s continued romance with May Wynn. It works at the start of the film because it really shows the character of Keith as a mama’s boy. After that, there’s no real need for May Wynn to be in the film at all beyond Hollywood’s evident need in the 1950s to always have a romance. The good news is that it takes up only a small amount of the film.

The culmination of the trial and the scene that follows is one of the truly great screen confrontations I’ve ever seen. I’m not going to put this under a spoiler tag, but it’s the best moment for Jose Ferrer in a great role. There are few dressings-down like it.

I love this film for a number of reasons. As a naval war film, I like it quite a bit, because I’m attuned to that. But it’s also a courtroom drama, and those are hard to resist as well. The Caine Mutiny has the complete package.

Why to watch The Caine Mutiny: A truly memorable plot and great performances.
Why not to watch: For a war film, there’s not that much war.