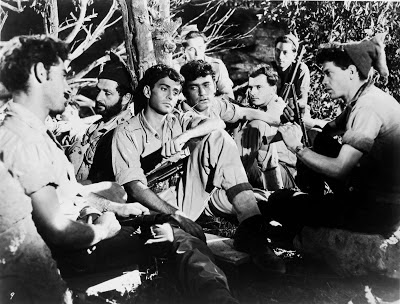 Some of the films on The List I privately call “unicorns.” What that basically means to me is that if for some reason I didn’t finish the full list, it would be because I couldn’t find this particular rarity. Deseret was one such film, as is The Cool World. Another of this is Giv’a 24 Eina Ona (Hill 24 Doesn’t Answer). I don’t know if this film has ever been released in the United States. It most certainly has never gotten a desperately needed restoration, which is a whole different issue.

This is the first film ever produced in Israel, and as might be expected, it is extremely pro-Zionist. That’s probably to be expected. The new Israeli citizens, facing attack from all sides just after the formation of the new nation all fight for the freedom and survival of the new state. The British, who held the mandate on the area, are depicted quite favorably, as are the Americans to some extent, and the Druze people. The Arabs, as should be expected in a pro-Israel film made less than a decade after the reformation of the nation and after the war in question, are almost faceless, rampaging villains.

The title of the film is a bleak one—the eponymous Hill 24 guards an important pass on the road to Jerusalem. Within the first couple of minutes, we see the end result, the conclusion that the film will then build to: essentially, we see the bodies of our four main characters, each in a posture of death in combat. And, as mentioned, Hill 24 isn’t answering, which certainly doesn’t bode well for anyone else guarding that particular piece of ground.

The bulk of the film isn’t specifically what happens in combat, but how these four disparate people ended up giving their lives for a chunk of high ground that, months before, would have meant nothing to them. We spend some time with each person, going through the individual tales that lead up to each person being there. The first story is that of James Finnegan (Edward Mulhare), an Irish Christian working for the British government during the mandate. He is charged with keeping track of a woman named Miriam Miszrahi (Haya Harareet). Over time, the two fall for each other, and Finnegan resigns his post. When Israel reforms, he returns to the country to be with Miriam. This story concludes about a third of the way through the film.

Second is the inevitable American connection. Allan Goodman (Michael Wager) is a tourist who gets pulled into the battle for Jerusalem. While recovering from being wounded, he is instructed by a rabbi, who kindles his faith. This is another long one, taking us to well past the one-hour mark, leaving only a little time for the final two stories and the conclusion of what happens to our four principals. This one is also pretty filled with combat through the streets of the Old City.

Our third story is that of Esther Hadassi (Margalit Oved), a Yemenite Jew born near the hills of Jerusalem and longing to return to them. By the time we get to her story, we have fewer than 25 minutes left in the film, so she is sadly given short shrift. In fact, this is true of her throughout the film—we learn right away that she speaks only limited English, and so we spend very little time concerned with her—although we do learn that she’s the one who eventually helped patch Allan up after his injury. And really, that’s it for her—a couple of lines and we’re on to the last story.

That story belongs to David Airam (Arik Lavie), a native Israeli fighting for his homeland. He has no particular story of how he came to take part in this fight, but instead relates a story of a patrol where he encounters a former Nazi still bent on doing anything he can to exterminate the Jews. His story, and the couple of sentences of Esther’s, and all of Allan’s are told on the drive out to the hill. When David’s story ends, the four share a toast and hop out of their vehicle to defend the hill. As this puts us five minutes from the end, you don’t have long to wait to learn why the film is called what it is. Anyway, we learned that at the beginning.

The biggest issue here is that this is an incredibly muddy print. I’m eternally grateful to Chip Lary for tracking this one down. It looks like someone’s ancient VHS copy pulled from an Israeli television broadcast and rendered digitally. When a transfer is this problematic, it’s difficult to separate the film from the medium—blackened places on the film, scratches and pops, missing frames, and horribly muddy sound that is all but gibberish in long sequences. I had to constantly remind myself that the condition of the film is hardly the fault of the film.

War films come in two varieties: those that promote the noble sacrifice and valiant struggle of war and those that decry the senseless waste of human life and tragic consequences of the same. Giv’a 24 Eina Ona is unquestionably of the first sort, a film that ennobles its four main characters through death in combat. It would be difficult for a film made at this time, in this place, and on this topic to be anything else.

I would be more than willing to watch Giv’a 24 Eina Ona again, provided I can find a better print. It’s propaganda, but it’s propaganda that is completely understandable, and it’s well made despite its obvious non-existent budget. I wouldn’t, however, be willing to sit through this version of it again. There are too many problems with the physical film for that sort of cinematic masochism.

Why to watch Giv’a 24 Eina Ona: A tale of new beginnings and the fight to make those new beginnings meaningful.
Why not to watch: Of all the films I have seen on this list, it’s the one most in need of a restoration.