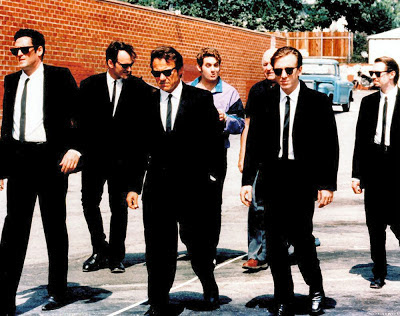 So let’s get this over with. I’m not a massive Quentin Tarantino fan. I actually like a lot of his films pretty well; my issue is more with his public persona than his films. However, there are things about his films of which I am not a fan. One of the selling points of Tarantino’s films is his dialogue. A lot of his dialogue really is good, but a lot of it seems to exist only to show how much obscure music or movie trivia he knows. Fortunately, that doesn’t come up much in Reservoir Dogs.

Plot is simplicity itself: six guys are hired to knock over a jeweler. The plan goes bad because evidently they were set up, and they’re fairly convinced that one of the group, either the six or the men who hired them are working with the cops or may in fact be a cop. Typical of Tarantino, nothing happens in order and there are a lot of flashbacks and playing with time and narrative. But really, the bulk of the story is the job goes bust and the surviving members of the team try to figure out what happened.

One of the great innovations of the film is that each of the six are given pseudonyms to protect themselves. They are, in no particular order, Mr. White (Harvey Keitel), Mr. Pink (Steve Buscemi), Mr. Blonde (Michael Madsen), Mr. Orange (Tim Roth), Mr. Brown (Quentin Tarantino), and Mr. Blue (Edward Bunker). The job is controlled by Nice Guy Eddie (Chris Penn) and his father, Joe (Lawrence Tierney). We start with the whole crew of eight in a diner on the morning of the job, and then, as per Tarantino’s typical playing with narrative, we jump to the aftermath, with Mr. Orange shot in the stomach and bleeding out and the job gone haywire.

Throughout, we get flashbacks the tell us how several of the main players were brought on the job. Each of these give us a certain amount of insight into several of the characters, at least the important ones. Mr. Blue simply vanishes, and Mr. Brown we know ends up shot and killed during the robbery. It’s the other four we’re a lot more concerned with. One little piece of the “everything in Tarantino’s universe is connected” meme is that Mr. Blonde’s real name is Vic Vega, which has led many to believe that he’s the brother of Vincent Vega (John Travolta’s character in Pulp Fiction).

This is very much not an easy film to watch. In fact, the first time I saw this film, I rented it with the intent of watching it with my wife, who is a huge fan of Pulp Fiction. Sue walked out about halfway through during “the scene.” If you’ve seen Reservoir Dogs, you know precisely what scene I’m talking about. Yeah, that one. Sue decided that fan of Pulp Fiction or no, she couldn’t handle watching anymore. I stayed around and watched the rest, but I fully understand why she walked away.

I’ll say this: even though I’m not a huge Tarantino fan, this is a hell of a debut. It’s not his best film, but it’s one that legitimately catapulted him into prominence, as it should have. It’s a sold script start to finish, and features some fantastic performances. Tim Roth spends the first half of the film lying in a pool of his own blood, but comes into his own in the second half. Chris Penn, for a guy whose career featured a lot of b-movies, does a more than admirable job in his role. For me, though, it’s Steve Buscemi who really makes the film what it is. It was also in many ways the film that made him who he became as an actor. He’d had a few plum roles before (as a favorite of the Coens, he’d been in a few of their films a few years earlier), but Reservoir Dogs gave him a more important and expansive role, and really allowed him to show off his chops.

Anyway, I have no objection to this being essential viewing. I can’t pretend that I’m sad that Quentin Tarantino is in the rearview mirror, though, if only until Django Unchained gets put on the list six to eight months from now.

Two final things: first, Tim Roth, when acting like he’s been shot in the stomach, sounds a lot like Bobcat Goldthwait. This is just for the record. I’m not saying that I wouldn’t sound like Bobcat Goldthwait if I’d been shot in the stomach, I’m just saying that’s who Roth sounds like. Those of you Tarantino fans reading this, try not to think about that the next time you watch Reservoir Dogs. The second thing is this—while I think this is a hell of a movie, the plot really does boil down to one of the older tropes, in that it’s the new guy who can’t be trusted. It’s always the new guy. Hasn’t anyone figured that out yet?

Why to watch Reservoir Dogs: A reinvention of film noir.
Why not to watch: If you’re sensitive, it’s far too violent.