Film: Since You Went Away
Format: DVD from NetFlix on laptop. 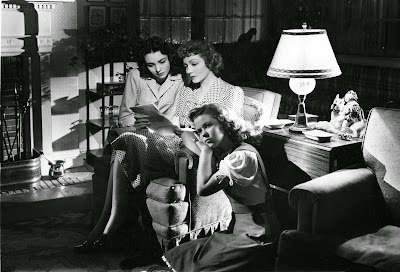 When you set up a NetFlix queue with the “very long wait” films at the top, there are benefits and problems that ensue. The benefit is that if you have a lot of films of that designation (as I do), you’re pretty much bound to get one of them every time you get a film. The downside is considerable, though—you really never know what you’re going to get. Might be the first movie on the list, might be the sixth one. So it was a bit distressing that in the last week of a quarter when I have a ton of papers to grade that Since You Went Away showed up. Oh, this isn’t a hard watch; it’s just close to three hours long. “Didn’t you just watch War and Peace?” I hear you ask. Yes. Yes I did. I also didn’t have papers turned in at the time, and I do now.

Since You Went Away is an American propaganda film, circa World War II. It’s obviously this and doesn’t try to hide it for a second. American films about the home front are vastly different from British ones. British films are filled with bombing raids and a burning London. American films are filled with scrap drives, men home on leave, and talk of sacrifice. While this is unquestionably a war film, there’s not a shot fired nor a bomb dropped for us to see. Rather, this is the war from the perspective of an interested family of spectators, essentially. This isn’t to say that their lives aren’t affected, but we won’t be seeing any military conflict here.

Tim Hilton (who is never in the film) has enlisted, leaving his wife Anne (Claudette Colbert) and daughters Jane (Jennifer Jones) and Bridget (an out-of-retirement Shirley Temple) at home to fend for themselves. Like every movie family of the era ever, the Hiltons have live-in help in the form of Fidelia (Hattie McDaniel), who leaves at the start of the film because the Hiltons will no longer be able to afford her services. In fact, not too long into the film, the Hilton women decide to rent out one of their rooms to a lodger in the hopes to help make ends meet. While Jane would like a young, attractive officer, they instead get retired Colonel William G. Smollett (Monty Woolley), who is set in his ways and cantankerous. That the family dog discovers a love for Colonel Smollett is played for laughs for the next three hours.

Rather than truly being about the war effort, the film is essentially about a series of relationships and the inherent nobility in keeping the home fires burning. One of the most important relationships is that of the family to naval officer Tony Willett (Joseph Cotten). Willett flirts with Anne fairly shamelessly, but it’s evident that he is really a friend of the family. Jane becomes infatuated with Tony for some time as well, despite being about 20 years younger than he is. Eventually, Jane turns her attention to the grandson of Colonel Smollett, William Smollett the second (evidently the name skipped a generation, played by Robert Walker). The Colonel and his grandson have fallen out over the boy’s being kicked out of West Point and opting for a role in the engineering corps rather than as an active solider. He and Jane eventually become an item to the surprise of no one.

The big turn before the intermission is the arrival of the news that Tim Hilton is missing in action. Much of the rest of the film is the family dealing with the uncertainty of what has happened to him and keeping those home fires burning on the off chance that he is someday discovered safe and alive.

There are two major problems with Since You Went Away. The first is length. This is a story that could have easily been told in 120 minutes rather than 177. There’s a lot of extra fluff here that isn’t necessary for the plot or even that interesting. It seems almost as if this was put into play to become an epic rather than by having a story that warrants that sort of length. A trimmer film would not only be better it would be more effective in a lot of respects.

The second major problem is predictability. For every character, both major and minor, I correctly predicted who would live and who would die. The minute you see a solider starting to make plans of what he will do after the war, you can pretty much go buy a condolence wreath; that guy’s not going to make it. It’s not a mistake that the film ends on Christmas, since it’s not going to let the ending show up without an uplifting Christmas miracle.

There are other problems, too. Agnes Moorehead plays a local divorcee, who is a solid stereotype of the idea of a divorced woman in 1944. This character, Emily Hawkins, is unpleasant, somewhat man-crazy, selfish, and mean. First, she’s not used enough to warrant the massive argument that happens at the end. Second, she exists wholly for the speech that she eventually triggers in Anne. Shirley Temple isn’t given a lot to do, either, and were she written out of the film entirely, there wouldn’t be much of a change.

Look, this isn’t a bad movie. It’s just a movie that wears out its welcome long before it should.

Why to watch Since You Went Away: Home Front U.S.A..
Why not to watch: It’s a good hour longer than it needs to be.