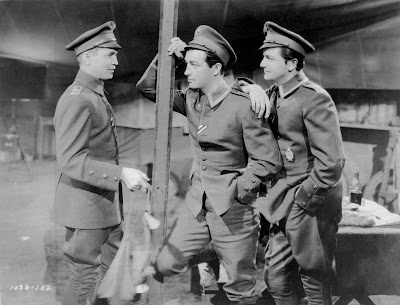 Anyone who knows me knows that I am not usually at a loss for words. It does happen, though, especially when I am presented with a movie that I frankly don’t understand. Oh, I get the plot of Three Comrades just fine. What I don’t get with this film is the point of it, nor do I understand for a second the incredibly stupid ending. In retrospect, I was probably way too nice to this on Letterboxd. Anyway, Three Comrades takes place in those years just following World War I. Just as it would seem that Germany didn’t know what it wanted to be in those years, neither does this film.

We start with the close of the war. A gang of three friends have survived and decide to go into business together with the premise that the country will need mechanics in these years. The three are Erich (Robert Taylor), Gottfried (Robert Young), and Otto (Franchot Tone). One evening, on the event of one of the three’s birthday, they go out for a drive in the country and end up racing another car. This is how the three meet Patricia (Margaret Sullavan).

All three are initially attracted to her, but it is Erich who forms the closest bond with her. A romance begins as the three men struggle to make their business a going concern. While it is evident that all three of the men love Patricia to some extent, it is Erich who begins to see her and to try to impress her. The other two pressure the new couple into marriage. He’s not sure that he can legitimately marry her because she is fallen nobility. She appears to be hiding something, but eventually consents.

What’s she hiding? Tuberculosis, as near as I can tell. Erich doesn’t find out about this until the honeymoon, when Patricia’s doctor (Monty Woolley) is forced to show up to save her life. Oh, there’s plenty of trauma here, and Erich promises that he’ll get her to a sanitarium (read: fancy health resort, not a mental hospital) before winter comes. In the meanwhile, Germany has started being torn apart by political factions. There are hints here at the rise in Nazism, although it’s still a bit to early for that. Nonetheless, Gottfried appears to be siding more with the communists and ends up involved in an increasing cycle of riots. Eventually, this gets him killed, which is a secret both Otto and Erich conspire to keep from Patricia while she attempts to regain her health.

Finally, a doctor decides that Patricia might well be a candidate for an experimental surgery that might just save her life. The procedure is delicate, and once completed requires her to be completely bedridden and essentially immobile for a couple of weeks. And here’s where we get to the ludicrous ending. I’ll put it under a spoiler tag, but believe me, you’re not doing yourself a disservice by reading it. Also note that I typically try to write clever spoiler tags, but this ending doesn’t deserve them. You may also find this post's title a bit lackluster. Same reason--I can't be arsed to come up with something better.

So the surgery goes well enough and Patricia is lying in bed. Erich tells her that Otto is leaving the hospital and that he’ll be right back; he just wants to say goodbye to his friend. While he’s gone, Patricia stands up and walks to the window to look at Erich, which naturally pretty much kills her on the spot. Note that this is after a successful surgery. Also note that this is after Otto has essentially sold or pawned off all of his material possessions and the entirety of the business so that they could afford the surgery in the first place. So, after bankrupting her husband and his best friend, she basically commits suicide because she couldn’t stand to not see her husband for a couple of minutes. Fuck!

So is this a romance? Kind of, but it’s a very strange one. Is it about the strange time of the Weimar Republic? A little. It doesn’t really delve into the political realities of the time but gives us the bread and circuses of rioting a couple of times. This is a film that has no idea what it wants to be. It’s not quite a tender love story, sort of a doomed romance, kind of a treatise on the political realities of 15 years before it was made. And because of that, it’s really none of those things.

So instead, what it is is frustrating. I had hopes for it despite the fact that I continue to be completely at a loss for why Franchot Tone was ever considered a great actor. Margaret Sullavan was nominated for this film, and while her performance is fine, I don’t see it as anything exceptional. It’s nice to see Monty Woolley and Guy Kibbee shows up as a bartender, but seriously, I spent the running time trying to figure out what this film was trying to say, and then waited a number of hours to collect my thoughts and I’ve still got nothing.

Why to watch Three Comrades: A story set in a strange time.
Why not to watch: It doesn’t know what it wants to be, and the ending is just bizarre.