Film: Smash-Up, the Story of a Woman
Format: Internet video on laptop. 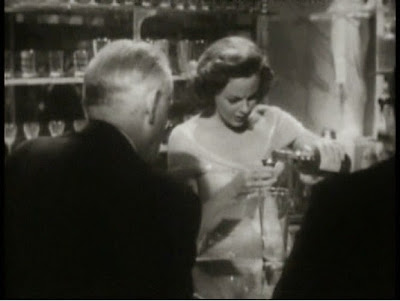 There are members of my family who are more than a little bit drinky. This more than anything else is the reason that I don’t drink much myself. I’m a drink or two per month guy. Part of this is because I genuinely like booze, so I realize that letting myself drink too much would be something easy to do. That being the case, movies about alcoholism are always interesting to me. It’s one of the reasons I like The Lost Weekend as much as I do. So when Smash-Up, the Story of a Woman showed up online, I figured it would be an interesting way to spend the night.

We begin with Angelica Evans (Susan Hayward), an up-and-coming lounge singer. Angelica is slowly building her career, but takes a minor left turn when she gets married to Ken Conway (Lee Bowman), a singer in his own right, but one who can’t get a job to save his life. He and his friend Steve Nelson (Eddie Albert) write songs and pitch them when they can, but in the early going, it’s Angelica who is supporting the family. Eventually, Ken gets a job singing cowboy ballads on the radio. One day, he belts out a song he wrote for Angelica. As it happens, he sings this on the day she is giving birth to their child.

The ballad proves to be exactly what Ken’s career needed, and suddenly he’s becoming quite the crooning star. He’s also suddenly got his own prime-time radio show, which allows him to put Angelica and their daughter in the lap of luxury. With her own career on hold and forced into social situations with people she doesn’t know, Angelica starts hitting the bottle and hitting it hard. Part of this is boredom. Part of this is being uncomfortable. A big part of it is Martha Gray (Marsha Hunt), the secretary of Ken’s manager. Angelica is convinced that Ken is having an affair with Martha, and it’s soon evident that Martha has fallen for the crooner’s charms.

It’s worth noting that it doesn’t take us long to go from everything being fine to Angelica being a complete lush. At first, her drinking comes in the form of social courage, drinking at the parties and receptions being held by and for Ken. Soon after, though, she’s drinking in the morning and drinking until she passes out. Eventually, Ken has had enough of her and while she is in a drunken stupor, she kicks him out of the house. He leaves, and when she wakes up the next morning, she has no idea or memory of what has happened. Worse for her, Ken takes the baby when he leaves.

This sends Angelica into a death spiral, both wanting her career back and falling right back into a bottle the moment there is any setback or reminder of Ken or her daughter. It’s not too long before she hits rock bottom, passing out in the street and being cared for specifically by the kindness of strangers.

There are a number of things to talk about here, most of them pretty positive, which is always a nice surprise. The first is the performance of Susan Hayward for which she was nominated for an Oscar. It’s a damn fine performance, filled with just the right amount of pathos and just enough reality to make it a really good performance. While she’s naturally gorgeous in many of the scenes, she’s also willing to show herself disheveled and looking like a couple of miles of bad road. That’s critical to the film. Without her looking like she’d been on a bender every night, there’d be no reason to actually buy into the most significant plot point. It’s a good role, one with teeth, and she jumps into it with both feet. For what it’s worth, this is my first Susan Hayward film, and I’m suitably impressed and happy that I’ve got a handful more of them on my list.

I’m also pretty impressed with Eddie Albert, who is sort of always going to be the “Green Acres” guy to me. He’s pretty effective here. He plays a completely realistic guy torn between his friend and his friend’s wife. He’s easy to like. Lee Bowman, who evidently isn’t important enough to get his own picture on IMDB is also worth a mention. While he plays kind of a hard ass and he’s almost a stereotype of the era (blocky head, pencil mustache, etc.), I have to hand it to the guy; if it’s his real voice featured, the man could carry a tune as well as anybody in the movies in the 1940s. As an actor, he’s serviceable, but since this is Susan Hayward’s picture, that’s really all he needs to be.

The biggest issue here is that Smash-Up, the Story of a Woman doesn’t earn its ending. It’s a feature (not a bug) of films of the era that we need to have the uplifting, happy ending. This one simply doesn’t wash. There are ways to get a happy ending out of this story or at least something like a satisfying ending, but the one we get is far too pat and far too easy. I chalk that up to its era. With a better ending, this would be unforgettable. As it stands, it’s merely worth seeing.

Why to watch Smash-Up, the Story of a Woman: It goes places even The Lost Weekend doesn’t go.
Why not to watch: It doesn’t earn its ending.

Email ThisBlogThis!Share to TwitterShare to FacebookShare to Pinterest
Labels: Best Actress, drama, Smash-Up the Story of a Woman, Stuart Heisler