Film: Hope and Glory
Format: DVD from NetFlix on laptop. 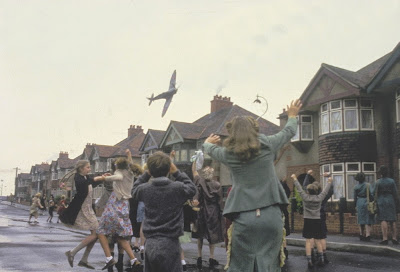 I’ve said before that of all of the many possible topics covered in film, nothing has been done more than war. It’s not difficult to find a film on pretty much any war topic you can think of, and for a war like World War II, you can find all of those areas of the war you can think of and more. There are prison movies, movies that concentrate on Europe, Africa, the Pacific, the air war, the war on and under the waves, invasions, defenses against invasions, sieges, concentration camps, and just about anything else. One of the most interesting aspects of the war to me is the home front. I’m interested in the desert war, too, but the home front is fascinating to me. So I was pleased when Hope and Glory showed up.

What makes Hope and Glory interesting to me is that it comes from the perspective of a child. Billy Roman (Sebastian Rice-Edwards, in his only film role) is about 10 when the war starts and his father (David Hayman) joins up. His mother (Sarah Miles) attempts to send him and his younger sister Sue (Geraldine Muir) to Australia, but relents at the last minute and keeps him home along with young Sue and older sister Dawn (Sammi Davis).

What becomes evident is something that I think many of us have always kind of expected: while terrible and filled with privation and the crippling fear of air raids, bombs, and fires, living in London during the Blitz was something of an adventure. I’m not suggesting that this is something I’d want to live through or experience, but for a child, there would be a sense of the magical in such an environment. There are certainly elements of that here, as the war seems to pass over Billy almost as something occurring in the background, as if he has nothing personally at stake beyond the night time bombing raids during the blitz.

And really, this is the film. There is a sort of romance between Billy’s mother Grace and family friend Mac (Derrick O’Connor), and it eventually comes out that Grace regrets her marriage to her husband in some respects. For Clive Rowan’s part, he is disappointed in his part in the war. After going through officer training, he learns that he is too old for the position and is turned into a clerk, “typing for Britain” as he puts it. But this keeps him close to home and out of the shooting war, which is disappointing to him, a relief to his family, and it seems mildly disappointing to Billy as well.

For Dawn’s part, despite being only 15 when the war starts, she determines to “do her part” by “befriending” as many soldiers and airmen as she can, and finds a Canadian soldier named Bruce (Jean-Marc Barr) to befriend in particular, at least until he is posted and sent off. Naturally, Dawn gets pregnant, which adds to the strain of the family. What also adds to the strain is the house catching on fire and burning to the ground, forcing the Rowans to move in with Grace’s curmudgeonly and mildly insane father out in the country.

Really, that’s all there is here. This isn’t so much a film with a plot but a roughly year-long slice out of the lives of these people living out the Blitz as best they can, made interesting by coming from the perspective of a young boy who sees it all as something magic. Even the bombing raids are something akin to fireworks, and the next day, he and his friends raid the bombed houses smashing anything not destroyed in the bomb blasts. Why? Because it’s something for them to do, and because there are things there to be smashed. There’s no recognition of danger or of the life threatening conditions. It merely is the world that Billy now lives in.

I’m torn on Hope and Glory because I genuinely want to like it, and I kind of do. I just wish there were more to it. I’d like something more than Dawn’s pregnancy and her relationship with Bruce as a plot, because it’s really the closest thing we have to a plot. It’s beautifully filmed and in general I like the characters. It also does a magnificent job of really giving Billy’s perspective on the entire process of the war.

But as good as this is, and as much as I enjoyed watching it, Hope and Glory comes across like a confection. Sweet on the tongue, maybe a touch of substance, and then gone, melted away into nothing. I’m not sure I’ll recall much of this a month from now except for that lingering sensation of pure adventure that can only happen in youth. Maybe that’s enough.

Why to watch Hope and Glory: A very different perspective on war.
Why not to watch: How many perspectives on war do you need?