This is the sixth in a series of monthly reviews suggested by Nick Jobe at YourFace. 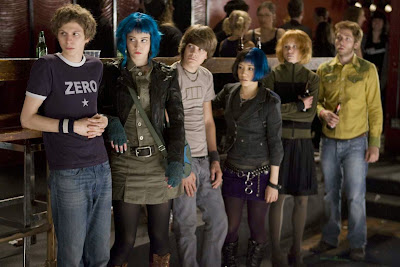 Steve: We need to talk, man.
Nick: uh oh
Steve: I am 7 minutes into Scott Pilgrim and I want to punch every character in the face until my knuckles bleed.
Nick: lol! You’re one of those people.
Steve: Yeah, I’m out of my 20s.
Nick: Maybe just give it some time? They might grow on you. I mean, yeah, Scott’s an asshole. But they call him on it throughout the movie.
Steve: No, I mean everyone’s an asshole.
Nick: eh
Steve: Wallace is an asshole, Kim is a precisely-tuned world weary riot grrl, Knives is suitably naïve…
Nick: Wallace is amazing, though
Steve: Right now, he’s kind of a dick.
Nick: he’s a lovable dick.
Steve: This movie is some 20-year-old’s hard on. I’m watching some comic geek’s wank material.
Nick: I’m not sure if I should take offense to that.
Steve: Well…I’m assuming you don’t watching this with your pants down.
Nick: >.>
Steve: But someone does.
Nick: You at least gotta give it up to Edgar Wright’s style here. It’s fantastic.
Steve: We’ll get there. It’s early yet. I should get back to it, but we can talk about it later.

Steve: I think I understand Scott Pilgrim.
Nick: oh?
Steve: It’s the perfect movie to define the Facebook generation.
Nick: I dunno about Facebook generation, but definitely anyone my age and younger.
Steve: Yeah. That’s pretty much who I mean. And I’m going to say something here that’s going to come across as rude, so I’m not speaking of you personally.

Nick: Did your opinion on Scott Pilgrim get any better?
Steve: I don’t hate it. But I also don’t love it. It’s a lot of insanity about nothing.
Nick: lol. Well, that’s better than I could have hoped.
Steve. I think I’m too old for it. It’s like The Breakfast Club. If you see that when you’re around high school age, you love it. If you see it for the first time when you are older than that, it’s a lot of whining.
Nick: Scott Pilgrim is definitely a cult film. It’s for a very specific group of people. Even when I taught high school, only a select group I heard from there really “got” it.
Steve: Yeah. And that’s not me. Or if I do get it, I’m just not that interested in it. It reminds me of some people I have as friends on Facebook.
Nick: lol
Steve: Virtually all of their posts are memes about how special/wonderful/unique/whatever they are, but they don’t do a fucking thing with their life except talk about how special/wonderful/unique/whatever they are.
Nick: lol, yup. But at least in Scott Pilgrim, every single person calls him out on it until he learns to have some self-respect at the end.
Steve: Does he?
Nick: well, for at least 5 minutes
Steve: If the whole thing is essentially in his head, I think I can argue that he’s just telling himself that he has self-respect. How far into his own navel do we need to go here? Claiming to be wonderful and unique because you say so doesn’t make someone wonderful and unique.
Nick: Indeed.
Steve. This is, bottom line, someone with big, expansive dreams and beliefs about himself and unwilling to do anything but live that in his own head.
Nick: What’d you think of Wright’s direction of it?
Steve: I love the look until I got tired of it. It’s ambitious.
Nick: lol. I never got tired of it.
Steve: Ironically, it exhibits all of the ambition that Scott Pilgrim attributes to himself and lacks completely.

This really does sum up my opinion on Scott Pilgrim vs. the World. It’s inventive, and the visuals are completely staggering. I’m suitably impressed with them, although they did start to bug me after a while. But mostly I stand by my assessment of the characters, particularly Scott Pilgrim himself. I’m convinced that this is all a fantasy in his head, and that substantially large parts of this film are more or less wish fulfillment of the character. If we all spend our lives in quiet desperation, it’s only natural that we want to break out of it, to shout to the universe that we exist and are important. For most of us, Whitman’s barbaric yawp only sounds in our own heads because we don’t get off our asses to do anything about it. Scott Pilgrim is one such character, living a life of importance and meaning inside his head while he’s a loser on the outside where the rest of us can see him. I can sympathize with the desire for that, but not with a character who accepts it so completely and willingly, and is so ready to give up even trying for something in favor of a fantasy where he’s a big fish in a big pond.

This is the only reading that makes any sense to me—this is all Scott Pilgrim’s fantasy world where he is central to the world and every decision he makes is important to everyone else. I think most people have that fantasy in their own head. I’m just not interested in it.

Full credit for the visuals, half credit removed because I still want to bloody my knuckles on every character’s skull. Except maybe for Wallace. I’ll give you that Wallace is an ass, but pretty awesome. You’re 4.5 for 6 now, Nick.

Why to watch Scott Pilgrim vs. the World: If you’re just a touch too old for Catcher in the Rye, knock yourself out.
Why not to watch: If you want to slap Holden Caulfield around, you’ll want to straight up murder everyone in this film.