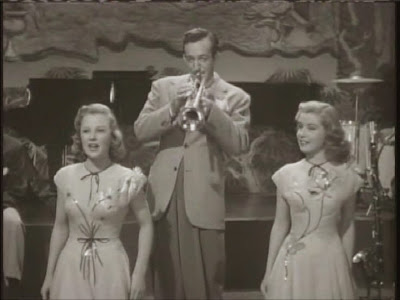 Like many a classic musical, this is essentially a romance with a whisper-thin plot. Seriously, this plot would fall apart with a sneeze. Two sisters, Patsy (June Allyson) and Jean Deyo (Gloria DeHaven) grow up in the vaudeville business. Eventually, they become pretty successful and start working at a club in New York. After work, they essentially operate something like a USO club out of their apartment, bringing up lonely soldiers, sailors, and marines and feeding them.

What they really want is the abandoned warehouse across the street, which essentially magically comes into their possession thanks to the intercession of an unknown personage who has been sending orchids to Jean. The girls turn it into a real club for servicemen. Various acts from around the city show up and perform during their off hours. Among these acts are Harry James and his orchestra, Xavier Cugat and his orchestra, Lena Horne, and a host of others.

The mysterious personage is most likely to come from a couple likely places. Patsy, ever vigilant for her sister’s well-being, is convinced that the sugar daddy is obviously rich, but probably middle-aged. Jean is convinced that he’s young. Based on what we know and the men hanging around them, the most likely candidates are an Army Sergeant (Tom Drake) or a sailor (Van Johnson). Of course, the name of the film rather gives this away. As it turns out, our sailor is named John Dyckman Brown III and is the heir to a massive fortune. And, while he keeps his identity as the benefactor a secret, both of the girls fall for him.

Honeslty, I’m surprised I managed to get three paragraphs out of the plot of Two Girls and a Sailor. In truth, the entire film is this very thin plot placed in service of putting a whole bunch of famous variety acts on camera. There are large portions of the film that are entirely devoted to listening to Harry James and his orchestra play trading off to Xavier Cugat. Really, these are the moments to pay attention to. These are far and away the best moments of the film. Of particular note is a very fun number performed by Gracie Allen. It's worth noting that this is not the type of musical where people pair off and sing their feelings at one another. It's a performance musical, where every song and/or dance number is a staged performance.

I find movies like this one difficult to write about, because there is so damn little to write about. There’s not much to say about the film or really the characters. Jean comes off at least initially as a bit of a gold digger but she reforms by the end of the picture. Patsy is, well, a pretty stereotypical June Allyson character. She’s almost painfully sweet. As for the various servicemen, particularly John Dyckman Brown III and Frank Miller (our sergeant) exist in a single dimension. They’re warm bodies in a place where a warm body was needed.

I get the point of the film, really. This was nothing more than a way to boost the morale of the American people during the war years. People went to the movies to see a show, to hear some songs they liked, and to have a cute little fluffy romance that they could enjoy on the screen and then forget about on their walk home from the theater. In that respect, Two Girls and a Sailor delivers.

I do have one more thing to talk about here, and that’s the presence of Jimmy Durante. Say what you want about the film in general, the best thing here by far is the presence of Durante. While his act is corny and goofy, it’s also genuine and a lot of fun. The man was a consummate showman, here no less than anywhere else. If you can’t work up a smile for Durante working his way through “Inka Dinka Doo,” you have a very sad and bitter outlook on life.

Why to watch Two Girls and a Sailor: Some great musical numbers and Jimmy Durante. Always Jimmy Durante.
Why not to watch: Tissue paper-thin plot and a dippy ending.