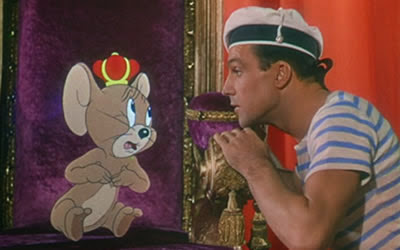 So here’s one of those moments where I find myself conflicted as a critic. Anchors Aweigh is a musical, and it’s a classical musical in the sense that the characters spend their time singing about their feelings to each other. I’ve started getting used to this, believe it or not. I’d still not frequently choose to watch a musical, but there are enough of them that I’ve genuinely enjoyed that I’m much more willing to give them a chance. Since Anchors Aweigh is not merely a musical but a Gene Kelly musical, I’m even more interested.

I like Kelly. I’ve always liked Kelly. Sure, there are other actors from this era of Hollywood that could dance and plenty of them could carry a tune better than Kelly, but I remain convinced that no one could do the things that Kelly could do on a dance floor. Astaire may have been more elegant, O’Connor more willing to play the terpsichorean fool, but for pure athleticism, no one could do the things that Gene Kelly could. The man had the strength and build of a linebacker and the grace of a bullfighter. There’s simply no one else like him.

As the name of the film implies, much like our heroes are members of the Navy, meaning that this is a film that treads the same ground as Kelly would a few years later in On the Town. And what do you know? Frank Sinatra is in both as a sailor as well. Anyway, as a ship rolls back into port, both Clarence Doolittle (Frank Sinatra) and Joe Brady (Gene Kelly) are awarded medals for valor under fire. They’re also given several days’ leave in Hollywood. For Joe, this means hooking up with Lola, his girl in this particular port. For Clarence, it means following Joe around to learn how to talk to women.

The two are stymied in this immediately when they are shanghaied by a cop to take care of a young boy named Donald (Dean Stockwell, yes, that Dean Stockwell), who has run away from home. Donald hopes to join the Navy himself despite being about six, and he immediately looks up to the two men in uniform. Clarence and Joe get him home and wait for the young boy’s Aunt Susie to get home from her night out. Expecting a matronly old woman, the two are shocked to discover that Susie (Kathryn Grayson) is young and pretty. The naïve Clarence is immediately smitten with her just as Donald is smitten with Joe and Joe’s uniform.

It’s all well and good until the two, wanting Susie to spend time with Clarence, spread rumors about her to someone who had the ability to get her an audition as a singer. Desperate, Joe claims that Clarence has arranged an audition for her with the great Jose Iturbi, claiming that Clarence and Iturbi are old friends. Of course, he isn’t a friend of Iturbi. Much of the rest of the film consists of Clarence and Joe trying to run into Iturbi to arrange the audition. Meanwhile, Joe starts to fall for Susie while Clarence bumps into an unnamed girl (Pamela Britton) from his home town of Brooklyn.

Since this is a traditional musical, this means that we’re bound and determined to get a happy ending for everyone we like. Since Anchors Aweigh doesn’t really have any villains, this means a happy ending for everyone. To put that in musical terms, this means that Susie will end up with Joe while Clarence will find true love with the unnamed girl from Brooklyn, and naturally we’ll somehow figure out a way to get Susie her audition with Jose Iturbi and it will go swimmingly. That’s okay; it’s what we’ve signed up for here.

Many a musical of this era has a number for which it is particularly remembered. An American in Paris has the closing ballet; Seven Brides for Seven Brothers has the barn raising scene. For Anchors Aweigh, the scene in question is Gene Kelly dancing with Jerry the Mouse in an early case of live action being blended with animation. It looks surprisingly good for something from this era. It’s also a wonderful scene, filled not only with Kelly’s tremendous dancing, but also some great comic moments. That all of this takes place in Donald’s imagination just makes it work completely.

Here’s the thing—in a film like this, you’re going to get singing and dancing from most of the cast, or at least the principal cast. This is both good and bad. Gene Kelly could carry a tune, but who cares? You get Frank Sinatra singing a lot in this. Sinatra could dance pretty well, but who cares? You get to watch Gene Kelly dance a whole shitload in this. This is what you come for, and this is why you watch a film like this. You can concern yourself with niceties of plot if you’d like, but why do that? No one is watching Anchors Aweigh for the riveting storyline or the deep meaning. It’s all about the singing and especially the dancing.

Why to watch Anchors Aweigh: You should watch Gene Kelly as much as possible. Frank Sinatra, too.
Why not to watch: Like many a musical, it’s about as realistic as a rainbow unicorn.