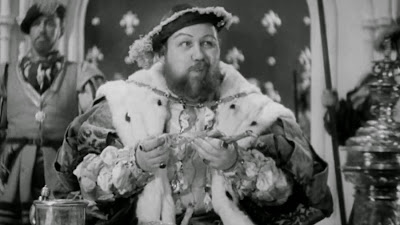 One of the problems with watching movies off a list (or multiple lists, as is the case here) is locating the films. There are all sorts of places, of course, and with a Roku and enough time running through the various free channels, one can find quite a bit. In terms of pay services, we’ve had a Hulu account for ages, and we almost never use it. My wife has agreed that we should dump it at the end of July, which means that anything on that site that I need to watch needs to get watched. Thus it is that I watched The Private Life of Henry VIII today during a break from grading papers.

Evidently the original plan of the film was to focus on the relationship between Henry VIII and Anne of Cleves, but it eventually expanded to include five of Henry’s wives. We pick up the story well after Henry (Charles Laughton) has divorced Catherine of Aragon and is on the verge having Anne Boleyn (Merle Oberon) sent to the headsman. The plan is that the minute Anne’s head hits the basket, Henry will marry Jane Seymour (Wendy Barrie).

Henry finally seems happy with his choice of wife for about a year and a half until Jane dies in childbirth with their son. This leaves Henry despondent and unwilling to marry again until hie is convinced to marry Anne of Cleves (Laughton’s real-life wife Elsa Lanchester) for political reasons. Sadly for Henry, Anne falls in love essentially with his messenger, so she resolves to make herself as unpleasant as possible, and essentially wins a divorce from him on their wedding night, setting her up with estates, titles, and her new lover as a servant. This works for Henry, because it allows him to marry Lady Katherine Howard (Binnie Barnes), who he has been carrying on an affair with for some time.

Finally, Henry seems satisfied with his spouse and everything is good. Of course, since we know there’s going to be a sixth wife (and the title of this post indicates what happens to Katherine), not everything is going to go swimmingly. Katherine, we learn, has spent her whole life avoiding love and favoring social climbing and advancement. Now that she has reached the pinnacle of social possibilities, she falls for Henry’s courtier, Thomas Culpepper (Robert Donat), with fairly predictable results. And then there’s finally wife six for the last few minutes of the film, leaving us with an aged and tired Henry, who seems to have been romantically jinxed his whole life.

Other than the fates of his various wives, I have no idea how true to history this film is. I suspect that it is significantly altered from the truth to make for a better story. The Anne of Cleves section in particular seems to be rife with twistings of truth, half-truths, and outright fabrications. And, while this film runs past rather quickly, it’s worth noting that the first wife of Henry, Catherine of Aragon, who does not appear in the film at all, was married to the man for a good 24 years. But historical accuracy isn’t really that important for a film like this. The Private Live of Henry VIII is meant more or less as an entertainment with just enough historical fact and lurid sexcapades to make it interesting for the masses.

Charles Laughton, here with a full beard and stout build, is everything we expect Henry to be. He’s loud and boisterous, blustery and concerned much with his own pleasures. He is not depicted as a tyrant or a bad king, though. It’s almost possible to view him sympathetically, particularly when the infidelity of his fifth wife is revealed to him and at the end. If the film is to be believed, this is a man who has been crushed in his spirit by things beyond his control, which is saying something when we’re talking about a man who wields the power of a king.

Laughton is actually quite good in the role, too. There are times when it’s evident that he’s having fun with it, and that comes through in a positive way. He’s completely believable in everything he does—every gesture and look fits the character. I also have a soft spot for Elsa Lanchester and I’m always happy to see her in a role that lets her display her comic gifts. These two are fun on screen and they’re having fun with each other.

The biggest problem here is that it’s not very good at keeping the interest of the audience, or at least of me. I was ready for it to be done long before it was. The original idea of focusing on Anne of Cleves might have been a better way to go, because shoehorning in five different marriages in a film that extends just a touch past 90 minutes is asking for a lot. This isn’t a complete failure, but it’s far from a rousing success. Mostly, it’s just kind of dull. Except for Laughton, that is, who is always worth your time.

Why to watch The Private Life of Henry VIII: Charles Laughton and perhaps Elsa Lanchester.
Why not to watch: It’s not really that interesting.