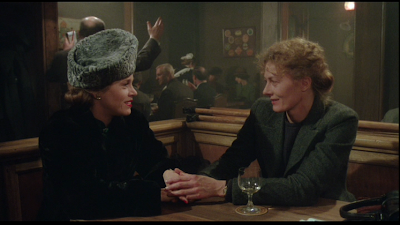 It’s interesting to go into a movie cold. There are plenty of films I haven’t seen on my Oscar lists that I already have something of an opinion on simply due to reputation. When I mentioned Sling Blade a couple of weeks ago as a film I haven’t seen, I got multiple replies telling me I need to see it right away. It’s hard not to have that color my opinion one way or another. With Julia, I knew nothing beyond the title and that it had been nominated for a ton of Oscars.

What it is is a sort of pseudo-biography not of Lillian Hellman (Jane Fonda), but of her childhood friend. However, the life of this friend, the titular Julia (Vanessa Redgrave), is seen only in pieces separated by a number of years. I have no idea how close to factual this is, and no idea if Julia actually existed as a person. I suppose that ultimately it doesn’t matter if this is pure fiction or letter perfect with history. What does matter is the film itself.

So Lillian is attempting to write a play and is struggling with it. Her sometime partner Dashiell Hammett (Jason Robards) tries to support her, but does so mainly by telling her that she’s wussing out on her abilities. He suggests that she go to Europe to hang out with her childhood friend, Julia. Julia, for her part, has moved to Europe to attend medical school. Her goal is to eventually study under Freud himself. We get a few flashbacks to their childhood and younger days. It’s hinted, although not actually expressed, that the relationship between Lillian and Julia may have been a sexual one.

Anyway, Europe starts to become embroiled in the insanity that eventually becomes World War II. Julia, for her part, becomes a rabid anti-fascist, which for the time essentially makes her a communist or at least a socialist. She is wounded in a riot, and Lillian goes to visit her. Eventually, Julia is removed from the hospital, and when Lillian attempts to discover what happened to her, she is told that the hospital has never had a patient of that name.

All of this is intriguing, and there is the promise of much more. Lillian eventually becomes a successful playwright and is invited to a dramatic festival in Moscow. While she prepares for her train ride to the Russian capital, she is contacted by one of Julia’s associates, a man named Johann (Maximilian Schell, who somehow nabbed a Supporting Actor nomination for this tiny part) tells her to change her plans. The idea is for her to take a train to Berlin and connect there to Moscow. She’ll be carrying $50,000 to Julia, who can use it to bribe officials and get people out of prison and out of Germany.

This is where the film really falls apart for me, sadly. It was intriguing and interesting up to this point, but when it dips into this spy stuff, it simply stops working. It gets far too detailed and I honestly find it difficult to care about what is going on with Lillian or with Julia at this point. What’s interesting here is Lillian’s relationship with Julia and her reminiscence of her past with her friend. Watching Jane Fonda sit on a train and fret over getting some money across the border, while it has potential, is surprisingly dull.

That’s really the problem here. The film starts out as something like a psychological investigation of this relationship and the two women. Then, suddenly in the middle, it turns into a spy film with clandestine meetings and money hidden in boxes and secret instructions hidden in Jane Fonda’s hat. It worked as a reminiscence of the past, and the sudden shift to spy work is not only jarring, it fails completely. I completely lost interest in the film after a time.

What’s worse, all of this is in service to getting Lillian the knowledge that Julia has a daughter whom she wishes Lillian to take charge over. This knowledge is what drives the final act of the film, which exists only to show the harsh reality of the world, especially in the views of Julia’s family. There are other ways to get us here that don’t involve more than a quarter of the film spent in pointless furtive looking around and trying to figure out whether or not to eat one of the chocolates from a box of the same.

I had high hopes for Julia because the start is so good and the performances so strong. When it slides off the rail it slides off completely, though, and that’s never something that bodes well for me.

Why to watch Julia: The first half.
Why not to watch: The second half.