Deux for the Price of Un 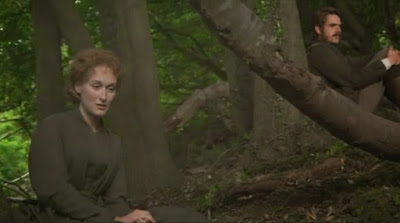 The concept of a story within a story, a play within a play, or a movie within a movie is hardly a new one. Typically when something like this happens, the conceit is that the “real world” story mirrors the inner story in some significant way. That’s absolutely the case with The French Lieutenant’s Woman. Here, the surface story is about the making of a film about a Victorian romance. And, naturally, the story of that film within the film very much has parallels in a relationship in the real world.

This actually isn’t that difficult, but it’s tough to explain. I’ll do my best. In the film within the film, a Victorian scientist named Charles Henry Smithson (Jeremy Irons) has proposed marriage to a proper woman of some substance named Ernestina (Lynsey Baxter). Ernestina is the epitome of what a Victorian woman should be, and the romance appears to be pure in all ways that we expect the almost Puritanical Victorian romance ideal should be. Soon after the proposal, Charles becomes aware of Sarah (Maryl Streep), a woman who is the subject of many unsavory rumors in the area. Sarah is called “the French Lieutenant’s Woman” because of a very public affair with a French soldier. Of course, Charles becomes infatuated with sarah, and as the story progresses, the two slowly fall in love with each other despite the social differences and the social suicide that even spending time with a woman considered all but a whore is for Charles.

In the “real” world, what we discover is that the two actors playing these roles, Mike and Anna (Irons and Streep again) are having a fairly passionate affair despite both being married to other people. Their relationship is more or less an open secret on the set, and becomes complicated when Anna wraps shooting for one part of the project and heads off to London where her husband is waiting for her.

In both cases, of course, the common thread is the forbidden love of the two people. In the one story, that love has dire and terrible consequences. It can literally destroy the lives of many people in the social circles in which they run. This point is continually hammered home by the presence of Sarah’s employer, Mrs. Poulteney (Patience Collier), a stiff, unyielding woman who is more or less the Victorian stereotype of a Christian idealist. Had all the Victorians been like her, there would not have been a generation past them, since she frequently dismisses her female staff for the terrible crime of actually talking to a member of the opposite gender. In the other story, of course there are potential consequences of the relationship, but those consequences are very different. The affair between the two film stars is almost expected and certainly accepted with a quiet sort of acquiescence, at least by the people on set.

What’s interesting to me is that it’s not obvious from the outset that we are actually seeing a film within a film. Very little is done to break the magic of that interior film. We see it much as an audience of that film would see it. The actors in the film don’t break character or walk off set after filming a scene. No, it’s as much a story for us as the story of the two actors and their relationship. It’s not made clear to us that these are actors portraying a story until we see them rehearsing a scene, and then see the scene play out. There are certainly hints that are dropped for us before we get there, but it’s a good distance into the film before it becomes explicit.

There’s a lot to like there. First is the very smart screenplay. The parallels between the two stories are both obvious and subtle. This is in large part due to the excellent screenplay by Harold Pinter. Our realizations of everything come naturally. So little exposition is directly given to us that we almost come to understand the relationships and the interior film by osmosis. Slowly, carefully, we come to understand what is going on. Interestingly, it is the film within the film that is far more compelling. It’s also the one in which we spend much more of our time.

I also like Jeremy Irons here. Every time I see Irons in a film like this, I wonder why he seems unable to say “no” to crappy roles. The man has talent, and films like this one demonstrate just how good he really is.

The big reason, though, is Meryl Streep. If Meryl Streep had one every Oscar nomination she deserved to win, she’d have more than three statues. As Anna, the actress, she is Meryl Streep, which is generally good enough to be worth watching. As the fallen woman Sarah, though, she is absolutely transcendent, and as good as she has ever been in anything. It’s interesting that the tagline of the film is “She was lost from the moment she saw him.” The truth is the opposite. He was lost from the moment he saw her, and in that moment of the film characters first meeting, the audience is lost to her as well.

I liked this quite a bit. I’m not sure I’d ever need to see it again, but I’m happy I saw it.

Why to watch The French Lieutenant’s Woman: You shouldn’t miss Pinter screenplays or Meryl Streep when she is this radiant.
Why not to watch: Keeping the stories straight.