What's Next is Skipping This Film 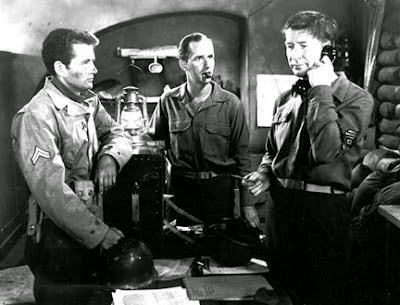 I’ve said before that these Oscar categories take me to some strange places. Few have been as strange as What Next, Corporal Hargrove?, a military comedy that appeared just at the end of World War II. For the life of me, I can’t figure out why this was nominated for Best Original Screenplay. It’s not nearly as funny as it thinks it is. It also doesn’t have any idea of what it wants to be, which is a significant problem.

In truth, there isn’t a great deal of plot here. We follow the exploits of Corporal Marion Hargrove (Robert Walker) and his scam-happy friend Private Tom Mulvehill (Keenan Wynn) as their artillery battery makes its way through France and toward Germany after D-Day. One of the recurring themes of the film is that Hargrove frequently gets promoted to corporal for competence and bravery and almost as quickly busted back to private for stupidity, incompetence, or bad luck. This is, again, supposed to be funny, but generally is not.

Among the hijinks we are witness to is Hargrove commanding his group of men to take a shortcut that proves to be directly into an unliberated town, making them the heroes who freed said town. This creates a situation with Jeanne (Jean Porter), the daughter of the mayor of the little town, who immediately falls for Hargrove, despite Hargrove having a girlfriend back home. Ultimately, Hargrove and Mulvehill are assigned as liaisons to the town to ensure the cooperation of the French citizenry with the military.

Eventually, after Mulvehill gets scammed by a local (the payoff is much later, but it’s so obvious that he’s getting scammed that this is hardly a spoiler), the two get transferred back to their battery. The film is quick to convince us that Hargrove isn’t a complete numbskull during this portion. He’s routinely cited for being kind of a screw up, but his direct superior, Sergeant Cramp (Chill Wills) is just as routinely quick to cite him for trying hard and having some skill. Hargrove gets sent to work as a forward observer. Eventually, this gets him captured, but he manages to not only continue to direct artillery fire, but to turn the tables on his captors and come back with a trio of German prisoners.

I give the film—particularly the nominated screenplay—a lot of credit for managing to tie up all of the loose ends it starts throughout. This means that by the time the scam plays itself out to its fullest, we’re going to have more complications involving Jeanne and embarrassment aplenty for both Hargrove and Mulvehill by the time they end up back on the road toward Germany and the end of the war.

When I say that the film doesn’t know what it wants to be, I mean that it has moments that are definitely intended to be pretty standard comedic stuff from the era. And the middle section, with Hargrove acting to direct fire while captured is the sort of thing that people get medals for in a real war situation. So is it a heroic war movie? A little, but not really. Is it a comedy? Well, there are moments of that, but it’s predictable and not very funny in general. The comedy is more the sort that elicits a grimace rather than a grin, and the heroice stuff happens so quickly and is played out so fast that it doesn’t really go anywhere.

I know this is shorter than I usually write, but I don’t have anything else to say about it. There’s not much reason to watch it unless you have a mind for this sort of thing.

Why to watch What Next, Corporal Hargrove?: Wacky wartime hijinks.
Why not to watch: This got an Oscar nomination?