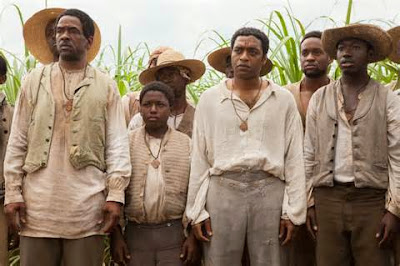 There wasn’t a great deal of surprise in 12 Years a Slave. I pretty much figured it would be like watching a much shorter version of Roots, and I was right in the main. I can’t honestly imagine how someone might make a positive film about slavery and I’m sure I wouldn’t want to see someone try. There’s a part of me that wonders what the point of a film like 12 Years a Slave is. As soon as I have that thought, though, I remember that stories like this are important. We need to be reminded of our past.

The title of this says it all, of course. We’re going to witness the life of a man who was sold into slavery and lived it for 12 years. The man in question is Solomon Northup (Chiwetel Ejiofor), a free man living in upstate New York. He is a talented violinist and is contacted by a couple of men who wish for him to come to Washington to accompany their circus. Of course, it’s a ruse. The men kidnap him and pass him off as an escaped slave named Platt. He is first purchased by a “good” master named William Ford (Benedict Cumberbatch). All is not peaches and cream, though. It’s immediately evident that Platt/Northup is an educated man, which brings him into direct conflict with Ford’s overseer, John Tibeats (Paul Dano). This conflict escalates to the point where Ford is forced to sell Northup to a man named Edwin Epps (Michael Fassbender).

Epps is the epitome of a cruel master. He beats his slaves regularly for not working hard enough and quotes scripture to remind them of the injunction for slaves to obey their masters. Epps has a cruel streak for all of his slaves, but he reserves both his cruelty and his lust for Patsey (Lupita Nyong’o). Because she is both beautiful and an excellent cotton picker, Epps is infatuated with her. Epps’s wife (Sarah Paulson) hates Patsey and is regularly abusive to her. Actually, Epps is abusive as well, regularly raping her and beating her for the smallest infraction or sign of disloyalty.

Eventually, through the kindness of a Canadian builder named Bass (Brad Pitt), Northup is able to free himself from his bondage and return to the north. Look, I know that sounds like a spoiler, but it really isn’t. It’s not called 12 Years a Slave Until Death, after all.

So yeah, slavery is bad. Aside from a few backwards assholes, this is something that pretty much everyone agrees with. Like I said at the top, it’s important to show these stories now and again for the same reason that the Holocaust is still a fertile place for movies and stories. We need to keep these atrocities in the public consciousness because we need to be ready to act against them when they crop up here or anywhere else. If we forget that humanity is capable of such terrors against ourselves, we’re more likely to fall into the same traps and repeat the same dangerous and terrible behavior.

What makes 12 Years a Slave interesting to me is that it tells this story in service of what looks like more than just the obvious anti-slavery agenda. It’s easy to outrage people with something like slavery. Seeing poor Patsey beaten almost to death for the infraction of wanting to use soap to clean herself is something that would outrage anyone with anything like a conscience. That’s low-hanging fruit, and it’s not the kind of thing that makes the movie noteworthy. No, there’s something more here, and that’s what makes the film interesting.

What I find interesting, beyond the stylized way the people speak (I do love the language of the film) is that every character, particularly the slave owners, are put forward to us as men of great and deep religion. When a plague of insects threaten his cotton crop, Epps naturally blames the slaves, but does so with the belief that he is being cursed by God for the wickedness of his slaves. He attributes the fact that the plague eventually ends to what he considers clean living and strict adherence to the Bible. In fact, he makes a point of using the Bible as justification for his ownership of slaves in the first place. It’s just as interesting that William Ford, the “good” master, is unable to see past his own possessions or monetary obligations and equally unable to see through his religion to see the inherent evil in one person owning another as a piece of property.

Is this an indictment on Christianity? In part, although that was certainly not the actual Solomon Northup’s intent. It is, of course, something that works on the surface as well—slavery is bad. Remember that slavery is bad.

I should mention the performances, which are all excellent. Fassbender, for instance, is a terrifying presence on screen. He is unpredictable and clearly insane, which makes every scene he is in something of a wild card. We are never sure how he is going to act, which is what makes him truly dangerous and terrifying. Chiwetel Ejiofor is probably the perfect casting for the role of Northup. I can’t off the top of my head think of another actor who could bring his natural dignity combined with his sense of desperation. It’s a tremendous performance, and as someone who has been a fan of his for some time, I’m happy that other people get to see in him what I’ve been seeing for years. Lupita Nyong’o is the discovery, of course, and she’s deserved every bit of acclaim she received for this role. I’m hoping she has a long and wonderful career ahead of her.

I should also mention Steve McQueen, who has either the great fortune or the terrible misfortune to share a name with arguably the coolest person of the last 200 years. McQueen has showed his directing chops and his daring in the past, and he continues to do that here. I’m hoping he has a long and wonderful career as well, because if the films of his I’ve seen so far are any indication, the man has an eye for what he wants to show and real talent as a storyteller.

Is this the best film of 2013? In some ways, it probably is. It will never be my favorite film of 2013, but it may be the most important an the one most suited for the role of Best Picture. I think I can live with that.

Why to watch 12 Years a Slave: Those ignorant of history are doomed to repeat it.
Why not to watch: Do you enjoy being uncomfortable?