Film: None but the Lonely Heart
Format: Turner Classic Movies on rockin’ flatscreen. 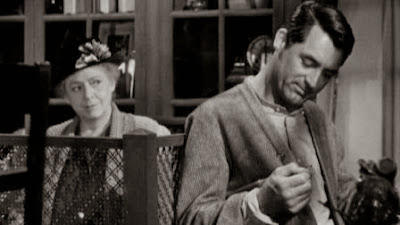 I’ve never been shy about the fact that I like Cary Grant. If you list out the actors from the golden age of Hollywood, there are plenty more accomplished, many with more awards, and some who were more talented actors than Cary Grant. But none of them had Grant’s style or raw personal magnetism. I’m always pleased to watch anything featuring him, even if it turns out I don’t love the film itself.

This is a simple story that gets convoluted pretty quickly. Ernie Mott (Grant) is the sort of guy who doesn’t spend too long in any one place. He’s shown up at home after a long period of wandering from place to place, earning a living as he finds it. Ernie has a basic mechanical knowledge, allowing him to repair watches and perfect pitch, which allows him to tune pianos. His mother (Ethel Barrymore) runs something akin to a pawn shop. What she wants more than anything is for her son to return home and take over the shop for here, something he is uninterested in doing. She offers an ultimatum: stay and work at the shop or leave and never return.

Ernie wanders off and bumps into Aggie (Jane Wyatt), a fellow musician. Aggie is deepy in love with Ernie, which he knows and only partially requites. That evening, Ernie meets Ada (June Duprez) and is immediately smitten with her, but assumes that things will go nowhere because he is planning on leaving the next morning.

Plans change after a conversation with family friend Ike (Konstantin Shayne), who informs Ernie that Ma Mott is dying of cancer. Ernie does an about face and decides to stay on to help his mother and to see her through her illness as best as he can. Around this time, a few more other pop up into the mix. The first, at least as Ernie is concerned, is the more serious one. His new girlfriend Ada is or recently was married to a local thug and gangster named Mordinoy (George Coulouris). Meanwhile, Ma Mott is being pressured to start accepting stolen goods from the leader of a gang of shoplifters.

Ther eare a few ways this can play out and none of them is happy. The third act follows naturally into the solution and resolution we’ll have to live with.

The problem is pretty simple: None but the Lonely Heart isn’t very good. Seriously. I fell asleep multiple times in this film and was forced to rewind a bit. I couldn’t be arsed to complete this review in a single go and I’m not sure I really want to finish it now. Certainly I’ve seen worse movies, but None but the Lonely Heart is just…dull. There’s a part of me that just wants to leave this review unfinished because I’m not sure how much it’s worth completing.

Now, I really have nothing bad to say about Grant, who’s almost always worth watching. It’s also a fine performance from Ethel Barrymore, who won a Supporting Actress Oscar for this, as far as I know. But there’s just not a lot else going on here that I care about. Sure, it’s sad when Ma talks about the fact that she’s going to die and tries to hide it from her son. It’s almost sweet when Ernie plays along, pretending not to know. But other than that, I’ve got nothing.

The biggest problem is that I just don’t buy the premise. Knowing exactly what kind of person Ernie is, I don’t see this massive change in character to keep him home. The fact that his mom is dying hits him, but he’s spent his life running from such problems—he’s more believable if he runs from this one. I buy his relationship with Ada, but why continue to pursue her and then go to work for the guy who a) used to be married to her; b) wants her back; and c) is using those first two facts to potentially get Ernie into legal trouble and mortal danger.

I see that I’ve left out a lot here, including appearances by Barry Fitzgerald and Dan Duryea, both of whom are actors I like. I can barely be bothered to mention them now.

Seriously, I couldn’t even be bothered to give this an interesting title.

Why to watch None but the Lonely Heart: When Cary Grant earns a nomination, you should pay attention.
Why not to watch: It’s depressing and boring as all hell.

Email ThisBlogThis!Share to TwitterShare to FacebookShare to Pinterest
Labels: Best Actor, Clifford Odets, drama, None but the Lonely Heart, romance