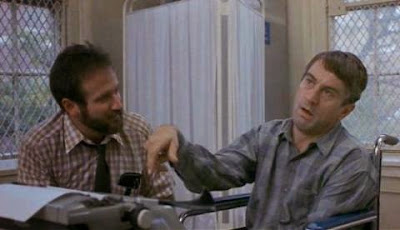 Of all the actors I have encountered in this massive project, none is so frustrating as Robin Williams. When Williams is reined in by a strong director and force to stay on task, he is capable of both brilliant and affecting performances. When left to his own devices, he is embarrassing. Fortunately for us, Awakenings was directed by Penny Marshall, who has the chops to keep Williams under control, which means we’re in for one of his better and more affecting performances. The other bonus here is that we get Robert De Niro in the sort of role that seems out of character for him.

Awakenings is based on the real experience of Dr. Oliver Sacks in working with patients who had been catatonic for years after surviving encephalitis. Here, Sacks is fictionalized as Dr. Malcolm Sayer (Robin Williams), who takes a job in a psychiatric hospital after working exclusively as a researcher and laboratory doctor. Sayer is uncomfortable around people and patients, and almost for this reason becomes fascinated with this collection of patients who are, essentially human statues.

Sayer discovers that while the people are catatonic, they are capable of reacting to events around them. He also learns of a new drug called L-DOPA that has been effective in treating Parkinson’s patients. Sayer, having traced back the history of these patients and their history of extreme physical tics before their catatonia determines that L-DOPA may be what is needed to bring them around. He gets his superiors to agree to test the drug on a single patient, provided there is family consent. He gets consent for testing the drug on Leonard Lowe (Robert De Niro). It goes slowly at first, but eventually, with enough of the drug in his system, Lowe “awakens” from his cataleptic state for the first time in 30 years.

After an impassioned plea to the hospital brass and the donors, Sayer makes a case to give the drug to all of the patients with the same history. And suddenly , all of the people who have been so still and so quiet for so many years are suddenly able to move and walk and talk. Leonard is suddenly a man much older than he remembered and aware of his life. He begins a sort of relationship with Paula (Penelope Ann Miller), the daughter of a stroke victim at the hospital. For him, the relationship is something serious—much more serious than it is for Paula, although it’s evident that Paula enjoys Leonard’s company. He also reconnects with his mother (Ruth Nelson).

But, of course, the world in which we live is not a perfect one, and the drug that was capable of bring Leonard Lowe back from a living sleep isn’t capable of keeping him there. As time goes on, the drug becomes less and less effective. His physical tics return, and his catalepsy returns as well. He freezes in position at times, and can only be brought back around by something external. As he sinks back into his former state, the patients around them see the fate that awaits them—the physical tics, the dissolution, and eventually the return to their state as human statutes. It’s terribly gutting and terribly human, and through all of this, we are given a very human story.

So what works? A lot of it does. For starters, a lot credit goes to Robin Williams. Kept under a tight rein, Williams inhabits his role without breaking character, going off script, or looking for a single laugh. When he wants to be, Wiliams can be incredibly empathetic, and that’s precisely what he does here. Sayer comes across very much as a classic absent-minded professor, but in Williams’s hands, he also comes across as wonderfully empathic and caring of his patients. That he is so incapable of making that sort of connection in his life only adds to his empathy for his patients. One of the unspoken truths of the film is his attraction to his nurse, Eleanor Costello (Julie Kavner, who is great as always).

De Niro is as much a revelation here as Williams. This is not tough guy De Niro or mobster De Niro, or even his more recent incarnation of comedy De Niro. This is Robert De Niro as something he rarely plays—a tragic human being looking for empathy and sympathy, who wants only his own life and who has that taken from him twice. The Academy has a history of nominating actors for roles that involve physical or mental afflictions, which may be where this nomination came from, but I’d be hard pressed to say this wasn’t one of his best in front of the camera.

There’s more that works here, too. Awakenings is blessed by smaller roles filled by wonderful actors including John Heard, Alice Drummond, and Anne Meara as awakened patients. Just as important is how nicely and seamlessly this is directed. Awakenings would doubtlessly work with more ham-handed direction, but it remains honest throughout. No emotional manipulation is necessary to make this film work on an emotional level, and so none is offered. The story is simply told and allowed to unfold in front of us, and for that, Penny Marshall deserves a great deal of credit.

This is what film can and should do. Film should tell us stories that enhance our lives and enrich our experiences, and Awakenings does.

Why to watch Awakenings: Robin Williams and Robert De Niro in roles that seem not to be built for them, but are
Why not to watch: The final act is hard to watch.

Posted by SJHoneywell at 8:29 AM