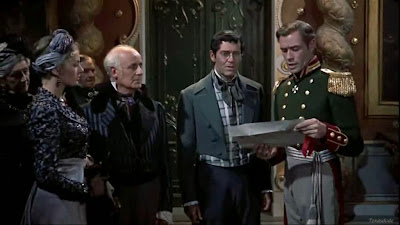 While the term “epic” in movie language tends to bring up films like Gone with the Wind, Lawrence of Arabia, Ben-Hur and even modern films like Gladiator, in the literary world, “War and Peace” is king. This isn’t the case when it comes to the film version—any film version, for that matter. The film in question here is the 1956 version brought in far less than the studio would have liked. There are serious problems with this version of War and Peace, not the least of which is the length of just under three-and-a-half hours.

I’m not going to try to rehash the plot here. The story takes place in Russia during the Napoleonic era, which means old-school military with guys standing in ranks in bright-colored uniforms shooting at each other. It starts with Russia attempting to assist in Austria (or maybe it was Poland) and ends with Napoleon’s attempted invasion of Russia. In between , there’s some romance and a lot of dithering around. Suffice it to say that everyone in the world appears to be in love with Natasha Rostova (Audrey Hepburn) despite her evidently being about 16. Among those after her hand are her cousin Pierre Bezukhov (Henry Fonda), Bezukhov’s friend Prince Andrei Bolkonsky (Mel Ferrer) and a womanizing rogue named Anatol Kuragin (Vittorio Gassman). For her part, Natasha, being young and blindingly naïve, loves each of them in turn, because that’s the way a Russian epic rolls.

A decent portion of the second half of the film takes place on the battlefield, and that’s where the film really shows its stuff. Made today, a lot of this would be CGI work, but in the mid-1950s, all of this was done by cramming a crap-ton of extras with bayonet-tipped rifles onto a field and having them run at each other. In fact, it’s likely these sequences that earned King Vidor his nomination for director. I say that because the rest of the film is dull and lackluster at best. We get a lot of dances and cotillions and people sitting in opera boxes mooning at each other.

One of the most significant problems is with the casting. I never thought I’d see myself write the following, but this film would have been greatly improved with someone else in the Henry Fonda role. I like Henry Fonda in general, and I genuinely like a number of his films, but he doesn’t belong anywhere near this. Not only is he out of place as a 20-something (he was 50 when the film was made), his voice is completely incongruous with everything else going on on screen. I can handle Mel Ferrer in his role; he looks the part at the very least. Audrey Hepburn feels like the best casting, but she was too old for this role as well, playing more than 10 years her junior for the bulk of the running time.

What’s more, the passions here simply don’t seem that real. I realize this is hardly Hepburn’s fault, but Natasha is flighty beyond all reason. As a naïve character, she falls in love with anything wearing pants for the most part, provided that the person wearing pants isn’t her brother. I don’t really buy any of the relationships, in fact. Pierre’s marriage to his cousin Helene (Anita Ekberg) is perhaps the most realistic of all of them; it’s completely passionless, but is also supposed to be completely passionless.

More than that, there are just too damn many characters to keep track of. That’s doable for something extended. The Lord of the Rings trilogy has a shitload of characters, too, but it’s also about 14 hours long, all told. Any good television series has more than a handful of characters, too, but we get to know them over season after season. Here, with about 210 minutes, we have to get involved in the lives of a couple of dozen people. Some of them were so similar to each other that I couldn’t tell them apart. For a considerable time, I thought the guy who was Helene’s brother was the guy she was supposed to be having an affair with at one point.

Ultimately, I didn’t care that much either for or about this film. My guess is that King Vidor’s nomination came strictly from holding the entire thing together with some level of consistency and for actually bringing the massive work to the screen. Well, bully for him. That he managed to get the story filmed is, I suppose, impressive. But given how ultimately dull this is, I can only speculate how much more could have been done in the hands of a director more attuned to the massive sweep and scope of a story like this. Why didn’t David Lean tackle it?

While this isn’t completely a waste of time, at this length, it’s not worth it, and at anything shorter, it’s simply no longer War and Peace.

Why to watch War and Peace: The story is a classic.
Why not to watch: Except for the battles, the production is dull.