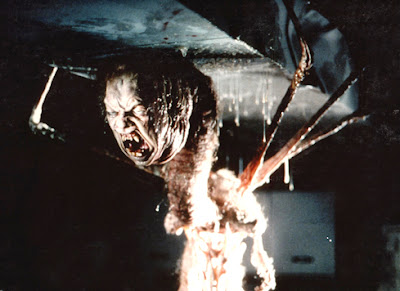 Before movie studios started backloading their catalogs in an effort to gain Oscar nominations, the greatest single month of movies (in my opinion) was June, 1982. Within three weeks of each other, E.T. the Extra-Terrestrial, The Thing, Blade Runner, Star Trek II: The Wrath of Khan, and Poltergeist were released. Of those, only one received a nomination for director. The Academy’s bias against horror kept John Carpenter and Tobe Hooper out of the running. The bias against science fiction negated Nicholas Meyer’s chances. That and the crappy voiceover killed the nomination of Ridley Scott. Who else got snubbed? How about Ingmar Bergman for Fanny and Alexander? How about Werner Herzog for Fitzcarraldo?

5: Best month of film ever notwithstanding, I’m punting E.T. the Extra-Terrestrial off the top as the film least deserving of this nomination. There are plenty of films where Steven Spielberg deserved a nomination, including a few he wasn’t nominated for, but this is one he didn’t deserve at all. There’s nothing particularly terrible about it, but there’s also nothing really exceptional in the direction that I can see. It’s fine, but except for specific Spielberg touches, this isn’t a film that couldn’t have been as good in someone else’s hands.

4: I have the same complaint with Sidney Lumet’s The Verdict. There’s nothing particularly terrible about this film, but there’s also nothing particularly great about it. There are significant story problems with the film, and I have trouble taking it seriously. Again, while I don’t really have a lot of negatives regarding the direction here, I also don’t really have a lot of positives. I like the way the ending was handled—the bit after the trial—but that’s not nearly enough to raise it to the level of Best Director.

3: There is an evident sense that a well-made epic deserves a nod for the director. That’s almost certainly the case with our winner, Richard Attenborough for Gandhi. Attenborough almost certainly benefited by directing the film that eventually won the Oscar, but did he really deserve to? He gets a lot of credit for managing to keep the whole story coherent and putting the thing on the screen, but so what? The biggest problem with Gandhi is that it’s too damn long in the first place and not a film that bears a lot of rewatching. I don’t think he gets this Oscar if the votes were tallied today. He probably still gets a nomination, but not the statue.

2: Tootsie is a smart movie from start to finish, and I appreciate that about it. There’s a lot to like in the direction as well. Pollack tells the story well, and for me, that’s what this award is all about. I like that he focuses on things that aren’t always a part of the main story. I appreciate how well the humor works in the context of a film that isn’t always funny or trying to be funny. More than that, I like how subtle it frequently is. We’re given moments of humor that we have to find the funny in rather than having neon signs pointing to the jokes. Sydney Pollack treats his audience like it has a brain, and that’s a good thing.

1: For me, though, there is really only one choice for this award based on the five nominees. I’d have loved to have seen a nomination for Werner Herzog, and had he been nominated for Fitzcarraldo, I’d have had a hard time choosing. But of the five we have, Wolfgang Peterson’s work on Das Boot is far and away the best of the bunch, and I think the best directorial performance of 1982. This is a movie I can’t sit to watch. I can sit for parts, but the claustrophobia runs thick in it, and all of that comes from Peterson, who manages to make the submarine a character in its own right. He was robbed here, and I think anyone who has seen both this and Gandhi knows it.