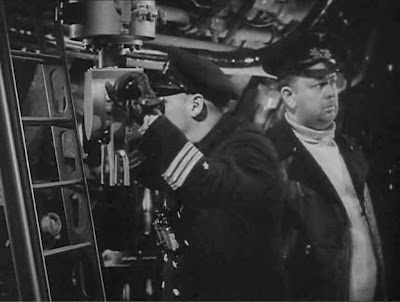 I find propaganda films an interesting sub-genre of film. 49th Parallel is unquestionably a propaganda film, and absolutely one that is specifically geared toward American audiences specifically as a way to drum up support for the war. Unlike many a later film that humanizes the average German soldier, the bulk of the Germans in this film, particularly the lead German, is portrayed as an inhuman monster. Such is the nature of propaganda, after all.

The premise is an interesting one. In the early days of the war, a German submarine approaches the Canadian coast. A group of six men from the submarine go ashore as a raiding party. Just as they come ashore, a squadron of Canadian planes spots the sub and bombs it, sinking it, stranding the half dozen sailors in the middle of nowhere in the Canadian wilderness. They resolve to get to the American border and find a German embassy, since at the time, America was still a neutral country.

49th Parallel (the takes its name from the border between Canada and the U.S.) is episodic in nature. While the German sailors are unquestionably the main characters here and the only ones we continue to follow from start to finish, they are absolutely nothing like the heroes of the film. As they continue on their adventures, their numbers are slowly whittled down by various forms of attrition. It seems that each of their major stops along the way includes one of their number being eliminated in one way or another. Interestingly, while the main characters are not actors of particular fame, many that they come across for a few minutes are, and get top billing despite their being in the film for only a few minutes each.

Among these incidents are their initial landing at a trading post, the theft of a seaplane to get them toward the border, an encounter at a Hutterite community, a train ride, a public gathering of Natives and another train ride to the border. While one or two of the Germans, particularly Vogel (Niall MacGinnis) are humanized and treated as something other than mindless ideologues of Nazism, the bulk of the fugitive sailors are completely lacking in humanity. This is especially true of their leader, Lt. Hirth (Eric Portman).

It’s worth talking a bit about Eric Portman’s portrayal of Hirth. In virtually any other year, Hirth would have almost certainly nabbed a nomination. He’s absolutely the main performer in the film and is in almost every scene. But in 1942, a portrayal of a German sailor and convinced Nazi who proselytizes at every opportunity simply isn’t going to garner any sympathy or a single vote. It’s a shame, because Portman, despite his accent, is completely believable as a Nazi lieutenant. For what it’s worth, Portman was about as British as one could be, but it’s easy to picture him as a German national based on this performance. Not only would he likely be nominated in a non-war year, he’d be a contender in most of them.

What I find particularly interesting here is that this is a film written by Emeric Pressburger and directed by Michael Powell. A year later, these two were making The Life and Death of Colonel Blimp, a film that was nearly banned for being anti-war. Here, they’re full on the propaganda bandwagon, ready to show the Germans as beasts and show any number of Canadians as willing to put their lives on the line (nearly a dozen are killed in the Nazi rampage) to protect their homeland.

This is a movie that’s hard to dislike. While the ending itself is perhaps never really in doubt, how we get there and the attrition on both sides along the way very much is. It’s a compelling film because it is so carefully written and intelligently played out. Our heroes take all sorts of different guises—an effete writer, a religious community, a French-Canadian trapper, even an AWOL Canadian soldier. In essence, the hero of this story is Canada itself.

There are some nice small performances here as well. Among our players are Laurence Olivier as the French-Canadian trapper, Finlay Currie as the head of the trading post, Glynis Johns as a young Hutterite girl, Leslie Howard as a writer and Raymond Massey as a soldier gone too long on his leave. All but Currie are at least Oscar-nominated actors, and they show up here in roles that put them on screen for just a few minutes each. It’s little things like this that make an impressive film even more interesting.

Why to watch 49th Parallel: A movie without a hero.
Why not to watch: Your main characters are the epitome of evil.