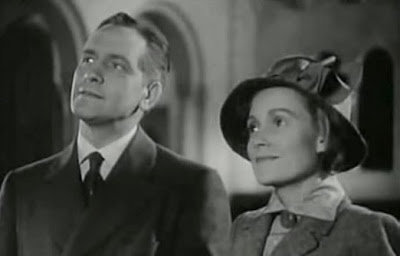 Let’s get this out of the way right away; if you’re a fan of films that shoehorn religious nonsense into the story to make everyone ennobled and pious, you aren’t going to want to read further. One Foot in Heaven managed to wrangle a Best Picture nomination in 1941, meaning it competed against The Maltese Falcon and Citizen Kane. The only way it should be mentioned in the same sentence as those films is in the following sentence: “One Foot in Heaven is the sort of movie that should never be compared with The Maltese Falcon or Citizen Kane.”

Let’s get the basics of it down so I can get to being pissed off that this is a film that made its way onto my list. In the very early days of the 20th century, William Spence (Fredric March) is a medical student, and a promising one. Just as the announcement of his engagement to Hope Morris (Martha Scott) is announced in a Toronto newspaper, William bursts in and reveals a massive change in his plans. He’s received “the call” and is giving up medical school to be a Methodist minister. Things move quickly in the world of Jesus, evidently, because he’s already got an assignment to head to Iowa. Hope quotes the Book of Ruth at him, and the two are married and head off to America to live among the heathen.

Not a great deal happens but character development for the first half of the film or so. We learn that the Spences are poor but honest church folk barely scraping by. We learn that the parsonages that they are given to live in tend to be old and worn down, and that if they make any changes to the furnishings, the locals starting thinking that the preacher man and his family are putting on airs. In fact, we learn that Hope isn’t supposed to wear her nice clothes anymore, because that would make the locals think less of the minister and his family. Anyway, they scrape through as best they can, surviving on his small salary and the fees he collects for weddings. Evidently, pride is a think with Spence, since we learn at the start that Hope’s family is loaded. But rather than ask for help, they muddle along.

In this part of the film we learn a few important things. William Spence lives his life by the book. However, he’s willing to deviate at times when it’s warranted. He’s also willing to essentially lie to his wife to get what he wants. He changes the name of their third child at the christening to what he wants instead of what Hope wants. We also learn that Hope always submits to the will of her husband at all times and in all things, and never a word is uttered about him changing the name of their child on the fly and against her wishes.

Eventually, they wind up at a church in Denver and the actual plot stuff starts happening. In Denver, the parsonage is in terrible shape despite there being a number of wealthy parishioners who come to his church. Spence concocts a plan to build a new church on the site of the parsonage so that a new parsonage would also have to be built. In so doing, he manages to alienate most of the wealthy people in the church. However, because he’s our hero here, all of the alienation happens because of the proud nature of the people of the church and not because he’s wrong. One wealthy woman leaves because Spence spends time with her gardener rather than her, which makes the gardener her social equal. Another family bolts when Spence complains about the choir, which consists mainly of that family and entirely of people who can’t sing.

And here goes the end—I’m spoiling this thing, so if you really don’t want to know what happens, look away now. A rumor spreads through town that the older Spence boy, Hartzell (Frankie Thomas) got a young girl pregnant, forcing the family to move. A little investigation shows that the family moved because the father got a job in San Francisco, and the rumor was spread by the former members of the church choir. Spence gets all indignant and (and this is where things get really iffy) essentially bribes the former church members to pay for the new church. His threat is that if they don’t pony up the cash—close to six figures, and this is in the ‘20s—he’ll spill his guts about what they’ve done to everyone from the pulpit.

So there’s your hero, folks—a guy who bribes and blackmails the members of his church to get a new house for himself. This is the guy who is held up to us as a paragon of moral virtue and Christian love. Over and over again, William Spence proves himself to be kind of a jerk, humorless, and thick. Over and over again, Hope meekly fails to assert herself. The one time she does—the naming of their third child—he essentially lies to her and swindles her, and she caves on it immediately. His no-fun attitude extends to everything in the film. When people are celebrating the end of World War I, he makes them stop, kneel in the snow, and pray.

Now, it would certainly be within the rights of any fan of this film to complain that I’d have this reaction to any film that features a preacher main character. I can only point to other films (Going My Way, for instance) that have a similar main character that I’ve liked quite a bit. This film fails completely on its face, since the character in question acts in a way completely outside of the morality he claims to uphold.

Fuck him, fuck this movie, and fuck the Academy for nominating it.

EDIT: I can't believe I forgot the premiere example of William Spence acting like an asshole in this write-up. Here you go: at one point just before the family moves to Denver, the parsonage they are living in catches fire. William rushes from the pulpit to his house yelling for his wife (whom he calls "mother" rather than by her name). When he sees that she is safe, he asks whether she has rescued his books. Then and only then does he ask about his kids. There's your hero, folks. He's a guy who cares more about his books than his kids. What a dick.

Why to watch One Foot in Heaven: Because you’re a sanctimonious dickhead.
Why not to watch: Because you don’t want to be pissed off for the length of its running time.