The Magic Before Mike 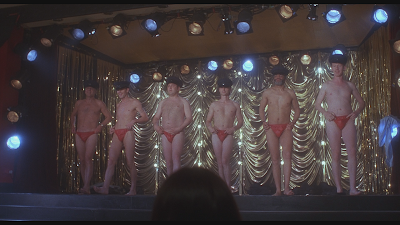 I’ve watched a number of movies I haven’t been completely keen on lately. I needed to watch something that I knew I was going to like. That means watching something I’ve seen before. In this case, The Full Monty was at hand, and so into the spinner it goes. For those uninitiated, this is the male stripper movie before Magic Mike.

Our protagonists are a group of unemployed factory workers in Yorkshire. They’re unemployed because the steel mill they worked at has been shut down. Gary “Gaz” Schofield (Robert Carlyle) and his friend Dave (Mark Addy) are reduced to breaking into the closed factory and stealing metal for scrap to get along. For Gaz, things have become extremely difficult. His ex-wife is on the verge of suing him for back child support. Failing to pay means being separated from his son Nathan (William Snape).

When one night he sees women lining up for a Chippendale’s show, Gaz gets an idea. He’ll put on his own male strip show, recruiting other out of work men. And, because he and his mates don’t have the requisite bodies to actually pull off a show like this, they determine that the only way to really attract a crowd is to go “the full monty,” to strip off completely. In addition to Gaz and Dave, the group consists of Lomper (Steve Huison), who Dave saves from trying to kill himself; Gerald Cooper (Tom Wilkinson), their former boss at the steel mill; Horse (Paul Barber), who is older but has some dance skills; and Guy (Hugo Speer), who has no talent save his own prodigious endowment.

While The Full Monty is unquestionably a comedy, there are certainly dramatic elements here where real life intrudes. After all, these guys aren’t doing this show for the fun of it, but because in their own ways, they’re all desperate. Gaz is obviously desperate for keeping his relationship with his son. But Dave is crippled by his own self-doubt. Gerald hasn’t told his wife that he’s been laid off and that they are living off borrowed money and credit cards. There’s a definite sense of pathos in all of this, and it works not because it’s silly (which it kind of is) but because it’s very real in its own way.

But, while there are certainly serious moments, the real sell of The Full Monty is the comedy. What’s better is that it doesn’t overplay its hand. We could have easily gotten a very long montage of auditions for the group, but we don’t. We get one rather tragic audition that turns dark at the end, then Horse and Guy, who are added to the group. It’s a smart move, not overdoing what would very quickly turn into an episode of the terrible American Idol auditions. The film knows when to pull back and when to stop a scene, and for a comedy, that’s a wonderful thing, indeed.

And there are wonderful little moments here, like Dave stealing a copy of Flashdance to use as something like a training video. We get great scenes of the six guys learning how to dance and trying to figure out if the whole thing is going to work. And underneath all of this, there is a sort of sweetness. For all the embarrassing moments, for all the pain and suffering and straight-up angst that many of these characters are going through, there is something akin to joy here in actually getting the whole thing to work.

And here’s the thing—the whole film, more or less, trades on the final scene when they actually go out and do their routine. It shouldn’t work. These guys, with the exception of a couple of them, aren’t what one thinks of when it comes to Hollywood handsome. They’re older men in some cases, overweight, and generally untalented on the dance floor. But the final scene is fun and joyous and silly.

Put bluntly, The Fully Monty works. It works precisely because it doesn’t take itself too seriously except for in the moments it needs to. When it’s allowed to have fun with its premise, it does, and when it needs to have a real moment, it has built up enough credibility that it can do that, too. In a lot of ways, it’s a template for a comedy with dramatic elements. It’s tonally spot on, and so even if it’s completely implausible, it’s also completely entertaining. It works not because it all makes sense, but because we want it to.

Not many films can essentially will themselves into working, but The Full Monty does. And for that, it’s absolutely worth your time.

Why to watch The Full Monty: It’s entirely enjoyable.
Why not to watch: If you’re a prude...