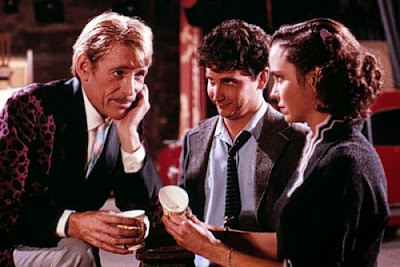 A couple of years ago, Nick Jobe asked me to give him a list of films he’d never seen that I thought he should see. One of the films I picked was My Favorite Year. I picked this for a couple of reasons. First, while it’s not Peter O’Toole’s best film, it is my favorite of his performances. Second, I think it’s funny as hell. Third, it’s a movie that I think is sadly forgotten. Nick didn’t like it as much as I do, and didn’t like it as much as I hoped he would. Naturally, I think he’s wrong, but that’s okay; this is my site, not his.

The plot is simple enough. Benjy Stone (Mark Linn-Baker) is a junior writer on a comedy variety show in 1954. One week, the special guest star is Alan Swann (Peter O’Toole), essentially an Errol Flynn clone. Swann made his living in swashbuckling action films and has since fallen on hard times due to his constant womanizing and drinking. In fact, he misses his initial meeting with the show because of a one-night stand and finally shows up so drunk he’s barely able to stand. The star of the show, Stan “King” Kaiser (Joseph Bologna), wants to dump the has-been star, but Benjy vouches for him. Because of this, Swann becomes Benjy’s problem literally. It’s up to Benjy to make sure that Alan Swann shows up for every rehearsal on time and sober, something that is going to prove to be a significant problem.

There are a couple of important subplots that drive the main plot as well. First is that Benjy is embarrassed by his family, something we learn when he takes Swann to meet his mother (Lainie Kazan) and her Filipino former-boxer husband (Ramon Sison). Swann himself has a daughter that he has lost contact with, mostly due to embarrassment. Additionally, Benjy is madly obsessed with K.C. (Jessica Harper), a co-worker who isn’t that much into him. Additionally, one of the running sketches on the King Kaiser show is about a mob boss named “Boss Hijack.” As it turns out, it’s a direct parody of an actual mob boss named Boss Rojeck (Cameron Mitchell), who is not happy about this portrayal and is willing to do anything to get them to stop.

While the secondary plots are important, Peter O’Toole is really the show here. Mark Linn-Baker is more than serviceable trying to follow Swann around and keep him out of trouble, but when O’Toole is on screen, he is where the eyes go. The film is also loaded up with suitably nutty characters to fill out the ranks. There are plenty of comedy moments throughout the film, many of which I find screamingly funny. To be sure, this isn’t the funniest film I’ve ever seen, but it has moments that I think rank near the top.

But it really does come down to O’Toole, who is surprisingly deft at comedy and seems to be blessed with something akin to excellent timing. O’Toole plays a drunk convincingly, and much of the humor comes specifically from his ability to look and act like a man constantly three sheets and a pillowcase to the wind. He delivers one-liners like a pro. Like I said at the top, it’s not O’Toole’s best film, but it is my favorite of his performances.

Of course, since this is a screwball comedy, everything is going to get fairly bleak as we head toward the end and everything is going to work out perfectly for everybody. We have to have a happy ending for the cast because that’s exactly what we sign up for. We want these characters to come out better than they go in, and of course they do. It’s hardly a spoiler to suggest that boss Rojeck gets put in his place, Swann survives the show, and Benjy gets the girl. If that didn’t happen, wouldn’t you be surprised?

My Favorite Year is underappreciated in my opinion, and it’s too damn hard to find. NetFlix evidently no longer has it, which is why I taped it from TCM. This is unfair for a film this good, this sweet, and this funny. Okay, the chances are good that you won’t like it as much as I do. That’s fine. But if you can honestly watch Benjy’s crazy aunt come to dinner wearing her wedding dress to impress Swann (“Like it? I only wore it once!”) or Benjy trying to teach K.C. to tell a joke and not crack a smile, you probably shouldn’t be watching comedies in general.

This is not a film I tire of. That’s the highest praise I can give it.

Why to watch My Favorite Year: Peter O’Toole at his best and a plot that ought to put a smile on your face.
Why not to watch: It’s a modern screwball comedy, which may not be your taste.