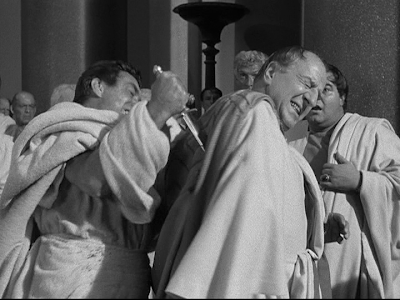 Shakespeare on film is always interesting to me. When it’s done well, there are few things I like watching more, depending on my mood. When it’s not done well, though, it’s terrible. There are multiple versions of Shakespeare that I genuinely like on film, and a few that are bad enough to appear on Mystery Science Theater 3000 (and at least one that has, matter of fact). So when I put in the 1953 version of Julius Caesar, I admit to a little bit of nerves. The cast helps, though. I had faith in most of the cast. The most interesting casting here is Marlon Brando as Mark Antony.

And it is interesting casting. Brando had become someone to watch two years before with A Streetcar Named Desire, but there were doubts that he could actually pull off a truly great role that didn’t require him to basically mumble a lot and be a brute. As a role, Marc Antony is a man of true nobility and a gifted orator, which would be ridiculous in the wrong hands. So while Streetcar made the man a star, it could well be said that Julius Caesar made him an actor. That’s not hyperbole when you consider that this was the third of four consecutive nominations for Marlon Brando.

I probably shouldn’t assume that you have read the play, although if you went to public school in the United States, there’s a very good chance that you read this in high school, probably in sophomore English. The plot is really simple. Julius Caesar (Louis Calhern) has returned to Rome to great acclaim and the Senate names him Emperor for life. Several prominent men, mainly Cassius (John Gielgud) and Brutus (James Mason) decide that the best course of action is to kill Caesar to prevent him from becoming a tyrant. They do so, and Caesar’s friend Mark Antony (Marlon Brando) then rouses the populace against Caesar’s killers.

The story itself is good, and like most Shakespeare, is a lot easier to follow and understand when it’s acted than when it is read on a page. Julius Caesar very much benefits from having a truly stellar cast. I’ll leave off Brando for the moment and instead concentrate on the others. The two performances of note aside from Brando’s here are those of John Gielgud and James Mason. These are men who were born to play Shakespeare, particularly Gielgud, who makes a fantastic Cassius. James Mason is, of course, James Mason, which means that just about anything he does is perfection even if the movie itself sucks.

So now we come to Brando. My opinion of his performance shouldn’t be a surprise given my first two paragraphs, but it really is a masterful performance all the way through. Certainly the man had acting chops, but this film proved that he could work with material that almost everyone thought was far above his caliber. He rose to this occasion (and apparently took a ton of advice from Gielgud) and demonstrated that he deserved to be talked about in the same language as other great actors of his day. I’ve liked a number of Brando performances, but few have been as surprising to me as this one.

So what of the movie itself? Well, it’s fine. Julius Caesar is a good story, even if there isn’t a great deal of action. The actual murder of Caesar in the middle of the film followed by the twin orations of Brutus and Mark Antony are the real highlight of the story and of the film itself. It could be argued that if these two scenes play well, the movie itself will play pretty well. And this is also the moment where Brando really shows that he can master the material he’s given. Mark Antony’s speech is a tricky one. The entire point of the speech is to incite the people against Brutus and Cassius, but to do so without being obvious—the praise those men and at the same time condemn them, to incite anger while protesting that this is not what is planned. It requires a precise performance, and Brando delivers it well.

It’s hard for me to dislike Julius Caesar, in this case because of how well acted it is. It’s also hard for me to be completely in love with this version because it really is nothing more than the play. That should be good enough, but I like it when Shakespeare is taken out of his era and put into a different one. Still, for what it’s worth, this is as good a Julius Caesar as you are likely to find.

Why to watch Julius Caesar: Brando does Shakespeare!
Why not to watch: This would really kick ass in color.