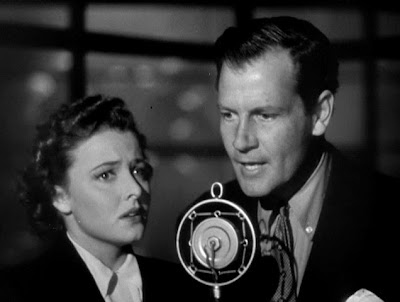 I didn’t realize before today that Foreign Correspondent was an Alfred Hitchcock film until the disc showed up. I’m certain that this is merely more evidence for the “You’re an idiot” crowd, but I’m okay with that. I’m not an encyclopedia. Anyway, Foreign Correspondent comes at an interesting point in Hitchcock’s career. In a lot of ways, it’s a throwback to films like Sabotage and The 39 Steps, yet has some similarities to a lot of his later films. This is something like a war film without really being one. When it was created, England and most of Europe were at war, but the U.S. (where Hitchcock had moved) was still neutral, a fact that will become part of a minor plot point at the end.

A newspaper editor (Harry Davenport) is unhappy with the quality of reporting he’s getting out of Europe as the continent slowly gears up for World War II. He decides that the best way to get the story is to stop relying on the “foreign correspondent” types and send over a solid writer more attuned to a crime beat. Enter Johnny Jones (Joel McCrea), who is sent off to Europe to find stories. He is also introduced to Stephen Fisher (Herbert Marshall), the leader of a collective seeking peace on the continent. Because the name “Johnny Jones” doesn’t strike the editor as exotic or impressive enough, he christens his reporter Huntley Haverstock, which sounds like a name that comes equipped with a trust fund and a monocle.

So off we go to Europe, where Johnny/Huntley is soon running in peace-loving circles headed by Fisher. He also meets Van Meer (Albert Bassermann), who is one of the true higher-ups in the peace movement. Johnny also meets and is immediately infatuated with Fisher’s daughter Carol (Laraine Day), who is equally attracted to him. Continuing to pursue the story, Johnny witnesses the evident assassination of Van Meer in Amsterdam, but soon discovers that the victim was an imposter and the real Van Meer is still alive and suddenly a MacGuffin.

This is also about the time that we get introduced to the best character in the film, another correspondent named Scott ffolliott (George Sanders, and yes that character’s last name is spelled correctly). He, minus the capital letter on his last name, soon becomes the idea man, distraction, and all-around stud of the investigation into the missing Van Meer. He also tends to get the best lines and with George Sanders saying them, he gets to same them with a world-weary drollness that fits the character, the story, and the film perfectly. Incidentally, the missing capital letter is explained, but I won’t spoil it here. The story behind it is a sentence or two long, but it’s so entertaining that ruining it just wouldn’t sit well with me.

There are some great moments in this film. One of the best is Johnny/Huntley sneaking into a windmill where he suspects that Van Meer is being stashed (and is). While listening to a group of conspirators, hoping for a word or two dropped in English, his overcoat gets caught in the windmill gears. This is a really tense and excellent scene as he carefully removes his coat while it is being pulled off him and then needs to deal with extracting it from the gears before it falls to the ground below and alerts the bad guys to his presence. We also get an appearance from Edmund Gwenn, most famous as Kris Kringle in Miracle on 34th Street playing a hired assassin and looking nothing like his signature role.

Where Foreign Correspondent fails is in the romance, which is not unusual for a thriller-style film from this era. After a meeting or two and a quick rescue that lands him in her hotel room in his bathrobe, Johnny is completely in love with Carol Fisher, and she with him. On their third or fourth meeting, he’s proposing marriage. It falls so flat. I understand why it’s in the film, because a romance angle always seemed to be necessary in the 1940s, but it’s y far the weakest part of a film that has a very smart, very solid espionage plot. That plot is complicated without being obscure or opaque. The audience needs to pay attention, but doesn’t need to strain too hard to keep up with the story.

The fact that it ends with a solid bit of action--a plane crash that looks like rear projection (because it is) followed by the plane hitting the water and flooding--only helps. This is a really solid sequence, and also allows a villainous character to partially redeem himself, which is always fun. And, the aftermath allows Hitchcock to get in a subtle dig at the still-neutral Americans.

I enjoyed Foreign Correspondent for what it is. The romance drags it down to mid-tier Hitchcock, which is a little sad because the plot is top of the line. I also like that it’s vaguely based on the life and correspondent history of Edward R. Murrow, at least aside from the part where Murrow was having copious amounts of sex with Winston Churchill’s daughter.

Why to watch Foreign Correspondent: Solid thriller with a wartime twist.
Why not to watch: The romance fails completely.