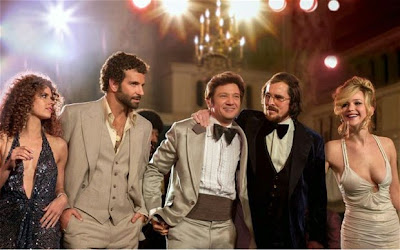 Slowly but surely I’m getting around to the most recent crop of Best Pictures. For today, this means one of the two pictures nominated for 10 awards. Sadly for American Hustle, it’s the film that came up 0-for-10 (Gravity was the other film with 10 nominations). For what it’s worth, Gangs of New York also went 0-for-10 and I love that movie, so I went into this with some expectations. It also got a lot of hype, so I had expectations on that end as well.

American Hustle is complicated as hell, probably too complicated for a full rundown on the plot, which means I’ll be talking more in generalities here. Why so complicated? Because it’s about a con, and a long con at that. There are a lot of players here and things quickly spin out of hand, which means that an accurate summation of events would be not only difficult but incredibly time consuming. So I’ll be hitting the high points rather than offering a complete blow-by-blow.

Irving Rosenfeld (Christian Bale) is an overweight, balding conman with a mildly insane wife named Rosalyn (Jennifer Lawrence) and a penchant for fleecing desperate people. He meets Sydney Prosser (Amy Adams) and tells her all about his schemes. She leaves him, only to immediately return with a fake accent and a proposal for the two of them to start fleecing people together. And so it happens that one of their deals turns out to be a plant. Rather than a mark, it’s FBI agent Richie DiMaso (Bradley Cooper), who has set the pair up in a sting. Now, to remain out of jail, the pair agrees to help DiMaso make a minimum of four arrests, at which time they can go on their merry way.

The situation quickly spins out of control as the sting operation soon involves Carmine Polito (Jeremy Renner), the mayor of Camden, New Jersey, who is working on a scheme to revitalize Atlantic City and restore casinos to the area, thus creating a wealth of jobs. Of course, where gambling exists the mob exists. The group hits on a plan to bring in an outside “investor” in the form of a fake sheik (Michael Pena), which then leads to Abscam and the entrapment of a variety of Congressmen taking bribes. But, of course, through all of this there are relationship issues. Irving and Rosalyn are estranged; Irving and Sydney dream of running off together, but Richie is attracted to Sydney as well, even though he thinks she’s British and named Edith.

So really, the plot here is a complete mess, and there’s just no other way to say it. Everything turns into a mess, and while the movie does actually make sense all the way through, there is very much the feeling that it is holding on only by the barest of threads. That it doesn’t completely lose touch with reality or the audience is a testament to David O. Russell’s skill, but it does leave a great deal to be desired on the audience end of things.

American Hustle puts me in an interesting position as a viewer. Among its many nominations are included one for each of the acting categories and with good reason. These roles are well-acted all the way through, and I don’t disagree with the nominations, save in one significant point. Bradley Cooper seems to me to be as much a part of the film as Christian Bale. So why was he nominated for Supporting Actor? Sometimes I genuinely don’t understand.

Even beyond the main cast, there are a number of people in smaller roles who do an admirable job of keeping things moving. Robert De Niro makes a small, uncredited appearance as a mobster, in a way going back to his roots, or at least back to an earlier part of his career. I also love seeing Louis C.K. playing an FBI agent and Bradley Cooper’s boss. I like Louis C.K. a lot, so I’m always pleased when I see him in something and when he lives up to his reputation. There’s something of both the comic and tragic in his role here.

I guess when I come right down to it, I can say that I liked American Hustle for its performances, all of which are excellent. I can’t love it for its plot, though, because it seems needlessly complicated and convoluted, even if parts of it were based on reality. Frankly, a lot of this is the relationship issues between the characters, and I quickly got to a point where I didn’t really care about the relationships and who was having sex with whom. So much emphasis there and in the interpersonals really dragged things down for me when the actual con game was a lot more interesting.

Sadly, despite the massive hype and the 10 Oscar nominations, American Hustle fell short for me. It’s a film I can appreciate and even recommend based on the strength of the cast and what they do on screen. But it didn’t hold my interest the way I wanted it to, and when it comes to a movie, there are few sins as egregious as that one.

As a last comment on the cast, it should be noted that Amy Adams’s cleavage was played by itself. I’m not sure who played Jennifer Lawrence’s hair.

Why to watch American Hustle: It’s kind of like reality only a lot more sleazy and intense.
Why not to watch: It’s not as good as its billing.