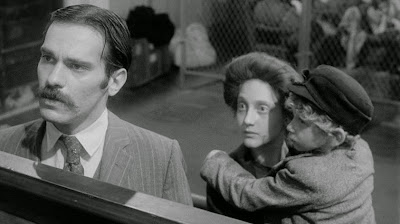 Hester Street starts life as a silent film with people dancing. One of those people is Yankl (Steven Keats), who goes by the name Jake. Jake is a Jewish immigrant to New York. He works essentially in a sweatshop making clothing, and frequently carrying on with a woman named Mamie (Dorrie Kavanaugh). The film has gone on for some time when we discover that in fact Jake is a married man, with a wife and child still in the old country.

It’s not until the film is a good 20 minutes in that we discover Jake’s wife Gitl (Carol Kane), who arrives at Ellis Island with their son (Paul Freedman). It slowly comes to light that there are two major conflicts here. The first is that Jake has lived a life as something like a playboy for a long time and with Gitl, he finds his extracurricular activities greatly reduced. The other, and far more significant problem according to Jake is that Gitl seems unable to assimilate into American society. Part of that comes from Gitl, who is unable to let go of many of the traditions of the old country and her difficulty in learning English. A bigger problem is that he doesn’t let her leave the apartment.

More conflict comes from Bernstein (Mel Howard), who lives with the family. Bernstein, much like Gitl, is more attuned to the old ways and unwilling (or unable) to give them up completely. Slowly, it becomes evident that there is a level of attracting between Bernstein and Gitl, but it’s something they dare not speak of, since Gitl is already married. The marriage doesn’t stop Jake from continuing to see Mamie and other women as well.

On a surface level, Hester Street is about the emancipation of Gitl. More than her emancipation, it is about her learning to give up her traditions and learn to become a part of a society vastly different from her old one. In Russia, the idea of her eventual divorce from her husband would be unthinkable, but in America, it becomes something necessary for her to grow and assimilate, even as she keeps some of her old traditions.

In a real sense, though, Hester Street is also about the Jewish experience of coming to America. The film is extremely careful about depicting the lives of the people on Hester Street as accurately as possible, from the clothing to the actual street itself. More, it’s about the almost paradoxical position of a group of people wanting to assimilate into society and yet being completely isolated from anything but people from their own country who have come to the same place and moved to the same neighborhood.

Carol Kane received her only Oscar nomination for this role, and it’s hard for me to say she didn’t earn it. It’s a difficult role, one that requires her to be both strong and vulnerable, foreign and odd to American eyes (modern, of the time the film was made, and of the period of the film) and yet sympathetic. The fact that she has incredibly expressive eyes helps her tremendously with this. She’s most commonly known as a comedic actress, so her performing this ably in a dramatic role might be a surprise. She is extremely compelling, though, and it’s easy to root for her.

Similarly, I’m mildly surprised at the lack of any sort of love for Doris Roberts in the role of Mrs. Kavarsky, the neighbor. Roberts is also best-known as a comedienne, but here she gives a fiery performance as something like Gitl’s mentor. She is a woman who has assimilated into society, but still retains the pride of her old-world origins. I love every moment of her on screen here.

My biggest complaint is that the accents become oppressive. They’re no doubt accurate, but they become almost an environment. I’m also not sure about some of the decisions made with the camera. I get why the film was done in black-and-white. It was the right choice and it makes a great deal of sense. But there are shots that go back and forth between Jake and Gitl, for instance, that are oddly made. Jake, for instance, is always in sharp focus while Gitl in the same scene is blurry. I can make sense of that, I think (Jake knows who he is, Gitl is still unsure), but it plays very strangely in that moment.

I liked Hester Street, but it’s not an easy film to recommend. It requires the right mindset and despite its short running time, a great deal of patience to fully understand and see. It’s worth it to see Carol Kane as something more than a goofy actress, though.

Why to watch Hester Street: Were you aware Carol Kane could act?
Why not to watch: The accents do get old.