Film: Born on the Fourth of July
Format: DVD from NetFlix on rockin’ flatscreen. 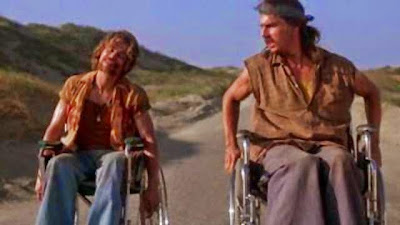 I’ve said this before, but I’m going to say it again here—Tom Cruise can act. Admittedly, the typical go-to Tom Cruise role is more along the lines of Top Gun or the Mission: Impossible movies, but when he’s given a good role, the man knows what he’s doing. I’d love to see him play against type more often because when he does, he’s really, really good. Collateral and Rain Man are my Exhibit A and B most of the time, but I think I might start using Born on the Fourth of July from this point forward.

Born on the Fourth of July is the biography of Ron Kovic (Tom Cruise), an average American who signed up to fight in Vietnam and who happened to be literally born on July 4. We get a bit of Kovic’s youth in Massapequa, including the speech by a Marine recruiter (Tom Berenger). Tom and some of his friends, particularly Timmy (Frank Whaley) sign up and head off to the war, although not before we get to see Ron run through the rain, break into his prom and dance with Donna (Kyra Sedgwick), the girl he’s always been in love with.

We also get a little of his experience in Vietnam, two events in particular. The first is a raid gone bad that ends up being a small version of the My Lai massacre. Confused, Kovic’s platoon shoots into a village, killing a number of innocents. When they leave, they are fired upon by the enemy, and in the confusion, Ron is convinced that he kills one of his own men. The second event is the firefight in which Ron is shot, severing his spinal cord and paralyzing him from mid-chest down.

The bulk of the rest of the film is Ron Kovic coming to terms with his new life and the feeling of abandonment by his country. It starts in the V.A. hospital that is tragically underfunded, understaffed, and underequipped. Lousy equipment, stoned patients and workers, and worse problems make this a hell, but Ron is determined to walk again despite his paralysis and the doctors’ insistence that it will never happen. In one attempt, he breaks his leg, and this almost leads to amputation, but eventually he heals and is released back to his family and Massapequa.

While the hospital was bad, in many ways trying to recover his life again is worse for him. After his war experience, he has no way to really connect with anyone. Despite his injury, he is also still a firm believer in the war at this point, and clashes particularly with one of his brothers who supports the war protests. Slowly, unable to find himself, Ron loses himself in booze, leading to a confrontation with his deeply religious mother (Caroline Kava), who kicks him out of the house when he claims to disbelieve in God and her religion in particular. He winds up in Mexico, where he encounters a number of other injured vets, including Charlie (Willem Dafoe), but this fails to satisfy him as well. Eventually, Ron returns to the U.S. and begins to look for a purpose to his life again.

It should be noted that I’m not a fan of war in general. For me, war should always be the last option and almost never the best option. You can call me a pacifist or a pinko if you like, and that’s fine. I don’t like to see people killed needlessly. I do, however, have a great deal of respect for the men and women who do join the military and literally put their lives on the line. If for no other reason, Ron Kovic’s story is worth seeing just for that—this is someone who paid a terrible price for his country, and he deserves both honor and respect.

Fortunately, there’s a lot more than just the story that’s worth seeing here. Primary among these things is Tom Cruise’s performance. It’s one of his best, and that’s saying something because I tend to like a lot of his films. A lot of what Cruise does doesn’t necessarily reflect the real “acting” part of the craft, but here, he’s dead on the character and nails every emotional beat. Instead of rooting for him because he’s killing bad guys and protecting ‘Murica, we root for him because we feel for him. He’s gotten a raw deal, and it doesn’t (and shouldn’t) sit well with us.

I don’t always love Oliver Stone, but when he’s good, he’s really good. Born on the Fourth of July doesn’t contain all of Stone’s typical problems, or at least has a lot less of them than I am used to. I tend to think of Stone as treating symbolism the way Spielberg treats emotional moments. If he can sneak just one more thing in, he will. Here, he’s limited in many ways by the reality of the story he’s telling, which means that we get a lot less of what makes Stone difficult for me to watch and a lot more of simply good storytelling and smart use of camera and music. I like a restrained Oliver Stone, and with this film, we get that restraint as well as his typical passion for a topic he cares about. It’s the best of both worlds.

This is not a thrilling movie by any stretch of the imagination, but it is a damn good one. It helps that the story is compelling, but it really helps that it’s played straight by all of the actors and most of them, particularly Cruise, are on the tops of their games.

Why to watch Born on the Fourth of July: Tom Cruise doesn’t get better than this.
Why not to watch: Like all Oliver Stone films, it gets preachy by the end.